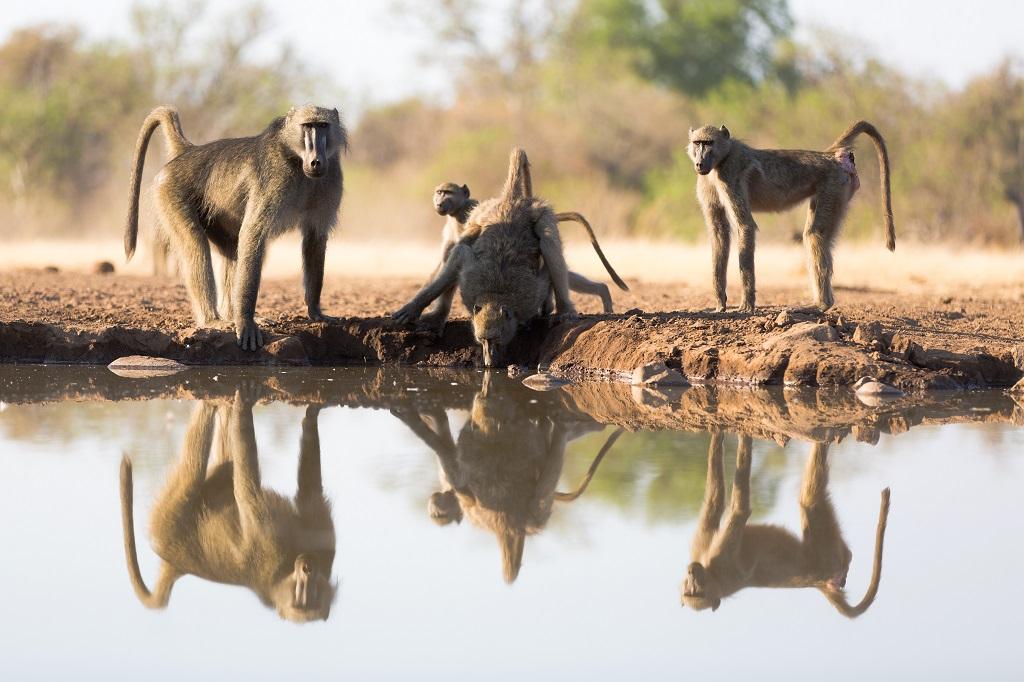 Baboons are large, smart, ground-dwelling monkeys. They are found across sub-Saharan Africa in various habitats and eat a flexible diet including meat, eggs, and plants. And they are known opportunists — in addition to raiding crops and garbage, some even mug tourists for their possessions, especially food.

We might be tempted to assume that this ecological flexibility (we might even call it resilience) will help baboons survive on our changing planet. Indeed, the International Union for the Conservation of Nature (IUCN), which assesses extinction risk, labels five of six baboon species as “of Least Concern”. This suggests that expert assessors agree: the baboons, at least relatively speaking, are at low risk.

We know people are having huge impacts on the natural world. Scientists have gone as far as naming a new epoch, the Anthropocene, after our ability to transform the planet. Humans drive other species extinct and modify environments to our own ends every day. Astonishing television epics like Our Planet emphasise humanity’s overwhelming power to damage the natural world.

But so much remains uncertain. In particular, while we now have a good understanding of some of the changes Earth will face in the next decades — we’ve already experienced 1°C of warming as well as increases in the frequency of floods, hurricanes and wildfires – we still struggle to predict the biological effects of our actions.

In February 2019 the Bramble Cay melomys (a small Australian rodent) had the dubious honour of being named the first mammal extinct as a result of anthropogenic climate change. Others have suffered range loss, population decline and complex knock-on effects from their ecosystems changing around them. Predicting how these impacts will stack up is a significant scientific challenge.

We can guess at which species are at most risk and which are safe. But we must not fall into the trap of trusting our expectations of resilience, based as they are on a specie’s current success. Our recent research aimed to test these expectations — we suspected that they would not also predict survival under changing climates, and we were right.

Models of the effects of climate change on individual species are improving all the time. These are ecological niche models, which take information on where a species lives today and use it to explore where it might be found in future.

For the baboon study, my masters student Sarah Hill and I modelled each of the six baboon species separately, starting in the present day. We then projected their potential ranges under 12 different future climate scenarios. Our models included two different time periods (2050 and 2070), two different degrees of projected climate change (2.6°C and 6°C of warming) and three different global climate models, each with subtly different perspectives on the Earth system. These two different degrees of warming were chosen because they represent expected “best case” and “worst case” scenarios, as modelled by the Intergovernmental Panel on Climate Change.

Our model outputs allowed us to calculate the change in the area of suitable habitat for each species under each scenario. Three of our species, the yellow, olive and hamadryas baboons, seemed resilient, as we initially expected. For yellow and olive baboons, suitable habitat expanded under all our scenarios. The hamadryas baboon’s habitat, meanwhile, remained stable.

Guinea baboons (the only one IUCN-labelled as Near Threatened) showed a small loss. Under scenarios predicting warmer, wetter conditions, they might even gain a little. Unfortunately, models projecting warming and drying predicted that Guinea baboons could lose up to 41.5 per cent of their suitable habitat.

But Kinda baboons seemed sensitive to the same warmer and wetter conditions that might favour their Guinea baboon cousins. They were predicted to lose habitat under every model, though the loss ranged from a small one (0-22.7 per cent) in warmer and dryer conditions to 70.2 per cent under the worst warm and wet scenario.

And the final baboon species, the chacma baboon from South Africa (the same species that are known for raiding tourist vehicles to steal treats) is predicted the worst habitat loss. Under our 12 scenarios, habitat loss was predicted to range from 32.4 per cent to 83.5 per cent.

The IUCN identifies endangered species using estimates of population and range size and how they have changed. Although climate change impacts are recognised as potentially causing important shifts in both these factors, climate change effect models like ours are rarely included, perhaps because they are often not available.

Our results suggest that in a few decades several baboon species might move into higher-risk categories. This depends on the extent of range (and hence population) loss they actually experience. New assessments will be required to see which category will apply to chacma, Kinda and Guinea baboons in 2070. It’s worth noting also that baboons are behaviourally flexible: they may yet find new ways to survive.

This also has wider implications for conservation practice. First, it suggests that we should try to incorporate more climate change models into assessments of species’ prospects. Second, having cast doubt on our assumption of baboon “resilience”, our work challenges us to establish which other apparently resilient species might be similarly affected. And given that the same projected changes act differently even on closely related baboon species, we presumably need to start to assess species more or less systematically, without prior assumptions, and to try to extract new general principles about climate change impacts as we work.

Sarah and I most definitely would not advocate discarding any of the existing assessment tools — the work the IUCN does is vitally important and our findings just confirm that. But our project may have identified an important additional factor affecting the prospects of even seemingly resilient species in the Anthropocene.

Click here to subscribe to our climate action newsletter. Climate change is inevitable. Our response to it isn’t.