Climate change is real: 600-900% excess rain in many Maharashtra districts 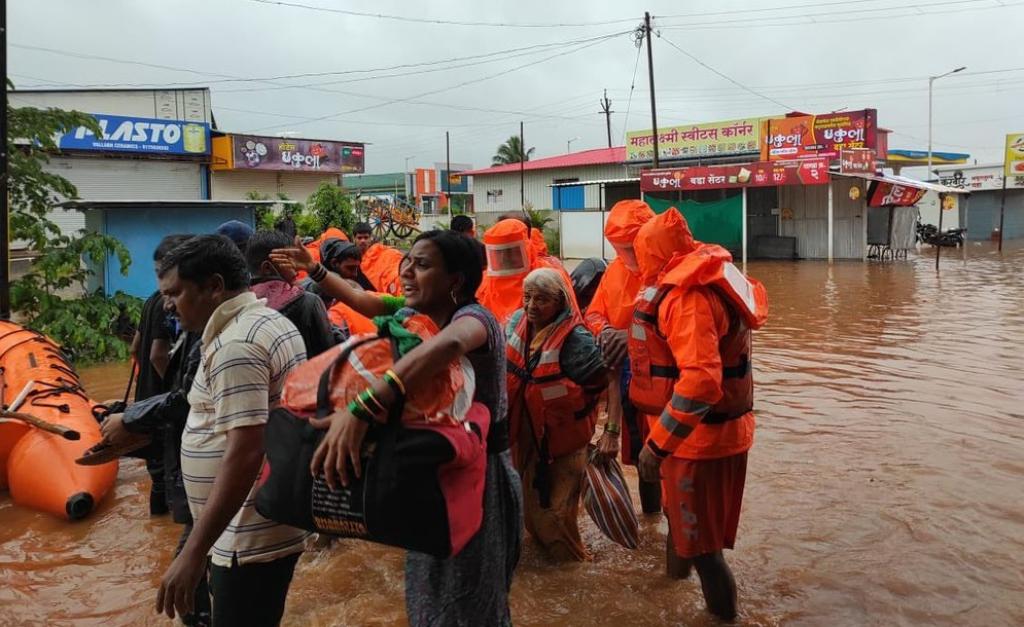 More than 70 people have been killed due to landslides and other flood-related incidents in Maharashtra, according to media reports, as the southwest monsoon has become extremely active after a long break that ended July 13, 2021.

The rainfall is being caused by an off-shore region of extended low pressure known as a ‘trough’. This trough runs from the Gujarat coast to the Kerala coast and mainly induces rainfall along the western Indian coast. The India Meteorological Department (IMD) has predicted that it may remain active for the next two to three days.

It is subsidiary to the main monsoon trough which lies across the north Indian plains, with its western end in Rajasthan and the eastern end dipping into the north Bay of Bengal.

The ongoing floods may further worsen as the IMD has predicted very heavy and extremely heavy rains in six districts — Raigad, Ratnagiri, Sindhudurg, Pune, Satara and Kolhapur — for Saturday, July 24. The rains may get subdued by July 25.

As of July 23, the floods have expanded to seven districts, with heavy downpours recorded over the past three days.

In fact, one of these districts, Ratnagiri, has broken a 40-year-old record for most rainfall in July. The district has received 1,781 millimetres of rainfall between July 1 and July 22, according to data from the IMD and the Floodlist website. The average July rain-fall for the district is 972.5 mm.

The worst of these floods were in Mumbai as the city and its suburban areas received 180.4 mm and 234.9 mm rainfall respectively July 18, according to data from IMD. These figures were six and seven times the normal rainfall for the day for the two regions respectively.

The rest of the days the rainfall has been high but not by much. The rainfall events in the city, though intense, were not unusual for Mumbai which lies in one of the rainiest regions in India. The floods were likely exacerbated by the city’s notorious drainage systems.

The overall excess rainfall for the state has also jumped by 23 percentage points to 34. This underscores the fact that the changing climate is bringing more rainfall in shorter durations of time.

A research paper published in the journal Nature in 2017 showed that the number of extreme rainfall events in central India have tripled between 1950 and 2015, while there is an overall weakening of the monsoon circulation.

The IMD had predicted heavy rains in Maharashtra July 23 and 24 in a tweet:

Meanwhile, relief operations are on in full swing. Teams from the National Disaster Response Force are helping the state authorities in rescuing trapped and stranded people. Chief Minister Uddhav Thackeray has announced a sum of Rs lakh each as ex gratia for the families of victims.

CM Uddhav Balasaheb Thackeray has announced ₹5 lakh each for the kin of those who lost their lives in the landslides caused by torrential rainfall. The state will also incur the costs of treatment for those injured.

The IMD had also declared a ‘Red Alert’ or warning for the districts of North and South Goa in Maharashtra’s neighbouring state for July 23. It has declared an ‘Orange Alert’ for Goa July 24. An ‘Orange Alert’ means to be on standby.