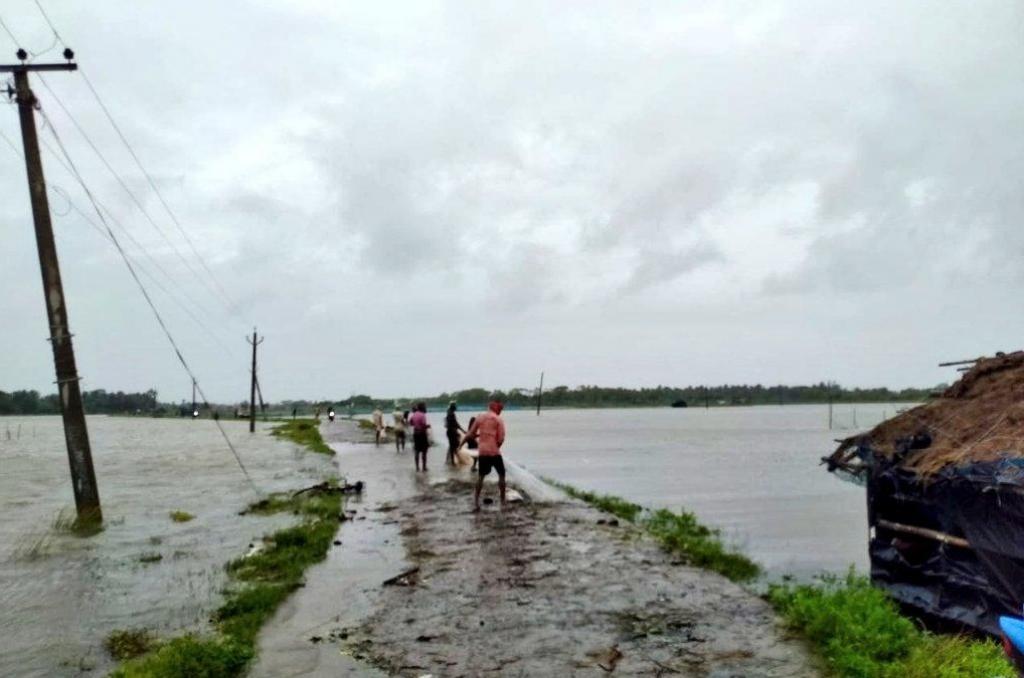 Some 48 per cent of India’s total geographical area received ‘large excess’ rainfall September 14, 2021 according to the India Meteorological Department’s (IMD) rainfall data. The country, as a whole, received 129 per cent ‘over normal’ rainfall.

The 48 per cent geographical area was spread over 17 subdivisions, which received ‘large excess’ rainfall. Some 13 of these subdivisions recorded more than 100 per cent ‘above normal’ rainfall.

The highest rainfall departure September 14 was recorded in the Saurashtra and Kutch subdivision — 1,538 per cent. On the same day, 19 per cent of India’s geographical area or eight subdivisions recorded ‘below normal’ or ‘large deficient’ rainfall.

Subdivisions are geographical areas demarcated by IMD. They are based on the climatic conditions of a region. Currently, there are 36 meteorological subdivisions in India.

Gujarat — which is divided into two subdivisions, Saurashtra and Kutch and the Gujarat region — as a whole received 951 per cent over normal rainfall September 14.

Kalavad in Jamnagar received 406 mm of rainfall and reported heavy flooding. Both the districts fall under the Saurashtra and Kutch subdivision.

AAP volunteers supplying ration to people trapped in their homes in Jamnagar.

AAP is reaching places where even the BJP govt has failed to reach!pic.twitter.com/KSiVAMKBZU

In the east, Odisha, received 881 per cent of excess rainfall. This was after a deep depression which had formed over the Bay of Bengal, moved inwards and crossed the northern coastal area of the state September 13. 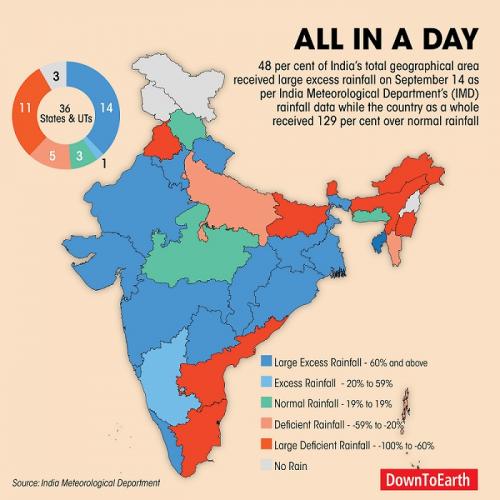 Odisha has been experiencing heavy rainfall due to the depression since September 11, leading to a rise in water levels in the Brahmani, Baitarani, Subarnarekha, Kushabhadra, Rushikulya and Devi rivers.

The state water resources department is yet to declare a flood-like situation. But, as of September 14, 1,887 people have been evacuated from low lying areas in the state.

Odisha has witnessed extreme weather conditions this year — from heat waves to drought and flood-like conditions.

A few days ago, 26 of the state’s 30 districts faced drought-like conditions. Paddy saplings wilted due to less rain. Now, large tracts of paddy fields are in knee-deep water due to heavy rainfall.

He added that climate change was increasing the frequency of the formation of low pressure areas in the Bay of Bengal, bringing unseasonal rains.

As a result, the state had recorded its heaviest spell of September rain in decades, Panigrahi said:

Heavy rains in Odisha are not uncommon. But less rain during the main monsoon months and the intensity of heavy, unseasonal rain has increased in recent times. Many factors contribute to unseasonal uninterrupted torrential rains. But there is no iota of doubt that the climate change caused by global warming makes extreme rainfall more likely.

The state had also witnessed a heatwave earlier in the year.

Odisha’s Angul was the hottest place in India at 40.1 degrees Celsius February 28, 2021. On September 14, the highest-ever rainfall was recorded in Angul and Sonepur districts.

Odisha’s capital city Bhubaneswar was the hottest place in India between February 25 and 27. It recorded 40°C February 27 this year.