Rainfall can destabilise the lava domes of a volcano leading to eruptions; it can also infiltrate the subsurface, causing magma to rise 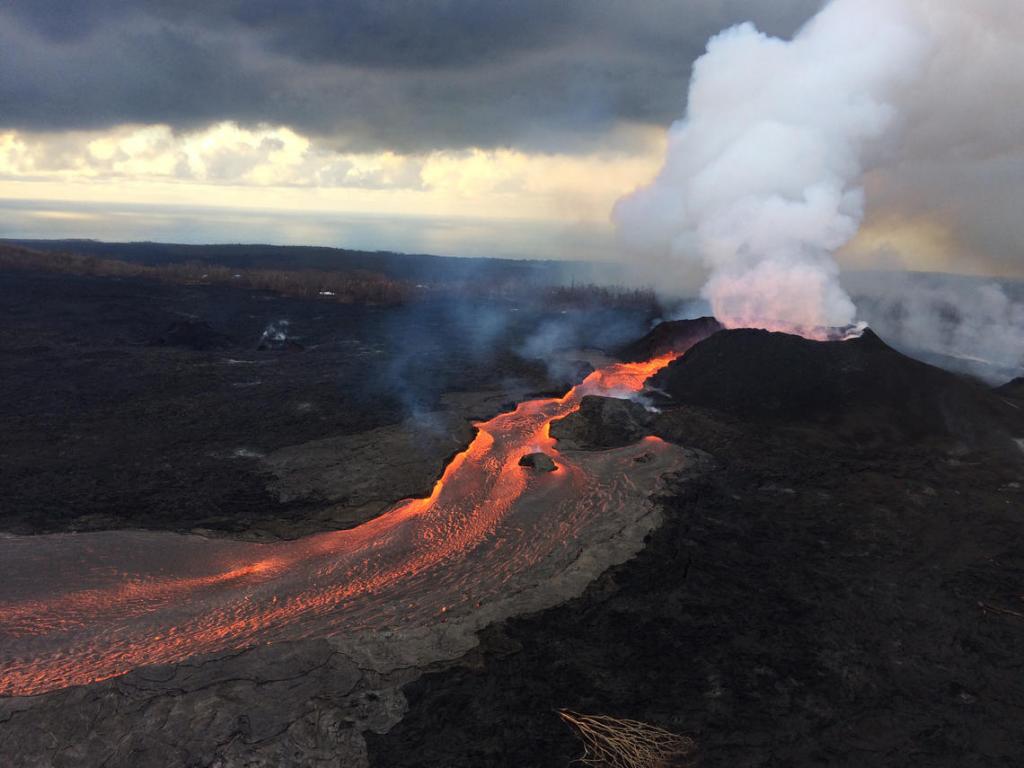 A 2020 Nature study showed that extreme rainfall may have led to the four-month-long eruption of Hawaii’s Kilauea volcano in 2018. Photo: @USGSVolcanoes / Twitter

Heavy rainfall and melting of glaciers might lead to frequent and severe volcanic eruptions, studies have suggested.

“This is because we have only just recently begun to study them. We are coming to realise that the geosphere and the hydrosphere are complexly interrelated components of the Earth’s system,” Jamie Farquharson, research engineer at the Université de Strasbourg, France, told Down To Earth.

Read From Kilauea to Fuego: three things you should know about volcano risk

Farquharson and his collaborator Falk Amelung, a professor at the University of Miami, published a paper on rainfall-induced volcanic activities in the Royal Society.

The duo initially studied a handful of volcanoes, including Mount Merapi in Indonesia. Previous research has shown a statistical link between heavy rainfall and specific volcanic hazards, the expert stated.

The team was also investigating Sierra Negra in the Galápagos, where the link was anecdotal and speculative.

They examined rainfall-induced volcanic activity in 1,234 volcanoes over the last 11,700 years. They also predicted future scenarios.

“That is about one in every seven subaerial (land) volcanoes in our dataset,” Farquharson wrote on Twitter.

Rainfall-triggered volcanism is often violently explosive, the study said. Such events have resulted in direct fatalities, including at Karkar in Papua New Guinea, Guagua Pichincha in Ecuador and Karangetang volcanoes in Indonesia, it added.

The team concluded that if global warming continues unchecked, rainfall-related volcanic activity will increase in more than 700 volcanoes around the globe.

“The majority of volcanic regions on Earth are robustly projected to experience more extreme rainfall as a response to continuing global warming, including places like the Caribbean, South America and Indonesia, where we see evidence of rainfall-triggered volcanism,” Farquharson added on Twitter.

A 2020 Nature study showed that extreme rainfall may have led to the four-month-long eruption of Hawaii’s Kilauea volcano in 2018.

Kilauea’s lava flow volume is estimated to be about 1.4 cubic kilometres. In the past few hundred years, only a few eruptions have produced more than a cubic kilometre of lava, according to the United States Geological Survey.

According to the team, Hawaii was inundated by an unusually prolonged period of heavy and extreme rainfall months in certain times months before the eruption.

Rainfall can destabilise slopes. It can also do the same to the lava domes of a volcano, a site where lava piles up around the vent, Farquharson said. The destabilisation causes collapses, landslides, rockfalls and — potentially — volcanic eruptions, he added.

Further, he pointed out, rain can also weaken rock, leaving it more susceptible to collapse. Also, rainwater might infiltrate the subsurface, creating a crack in the rock. This makes it easier for magma to rise to the surface.

Previous studies have estimated that global terrestrial volcanic activity increased by a factor of 2-6 in deglaciating regions between 12,000 and 7,000 years.

Researchers have found clues indicating increased volcanic activities following a period of rapid deglaciation in Iceland, continental Europe, and eastern California, according to a 2016 study.

Rapid deglaciation, according to the paper, can lead to high magma release. Ice stresses the Earth’s crust, causing magma to stay put. But when the ice retreats, the pressure reduces, causing magma to rise to the surface.

“Essentially, the glacier is pushing the crust down into the mantle. When the weight of the ice is removed, the crust slowly “floats” upwards again,” Farquharson said. This is like holding a rubber duck underwater. When the duck is let go, it bobs back up again, he said.

The experts stressed the need to scale-up research efforts on climate-volcano impacts.

“This will, in turn, enable better preparedness for the potential consequences of climate-volcano impacts, including exacerbated volcanic hazards, societal impacts and economic repercussions, as well as climate-volcano feedback loops that could amplify or dampen climate change driven by anthropogenic activities,” the review paper read.