Climate change projects aren't working because communities are left out

Unless they trust climate change programmes, communities will continue to plunder forests rendering such interventions redundant 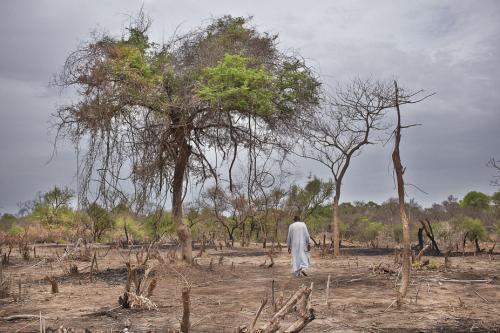 Nigeria recently began a fresh effort to ascertain its climate change obligations under the Paris Agreement - a global action plan to put the world on track by limiting global warming to below 2°C. However, for its programmes to succeed transparency is crucial.

This means the programmes must manage and publish information on actions and processes so that it’s accessible, timely and accurate. This in turn builds trust and ownership between those that control the finances and with the communities who are directly affected by climate change initiatives.

I did a study on community experiences in Nigeria’s Cross River State with an ongoing climate fund project called Reducing Emissions from Deforestation and Forest Degradation (REDD+). It supports national governments in sustainable land uses and better stewardship of forest resources among the people, particularly those who live on the forest edge. It’s one of many vehicles being used to distribute climate finance.

I found that by including everyone in the process, climate change projects were more likely to be effective and sustainable. If they didn’t, communities become suspicious and won’t engage with the conservation efforts.

One important initiative of REDD+ is its social safeguard scheme which directly targets forest-edge communities.

It provides monetary compensation (carbon credits) for restrictions imposed on income they could’ve derived from the forest – this includes forgoing their rights to emit certain amounts of carbon dioxide (eg. from cutting down trees or burning wood for fuel) from their livelihood activities which depend heavily on forest resources.

This is where issues of transparency occur. REDD+ funds flow from the United Nations to the government. They are then held in a trust on behalf of the forest communities. Disbursement is usually done through a specialised local agency or ministry. In most countries, the local agency is usually the ministry or a special commission in charge of forest. The agency works with representatives of the forest communities known as the Forest Community Association.

Initial results suggest communities aren’t confident that the project will provide them with benefits – in terms of carbon credits or the provision of alternative livelihoods.

The source of apprehension was a lack of inclusion. They weren’t actively engaged with REDD+ officials and didn’t have access to information. This fuelled the rumour mill within forest communities and led to allegations of bad practices within the REDD+ focal office.

Experiences elsewhere show there may be reason to worry. In Kenya, 80% of respondents in an assessment done on the corruption risks in the project expressed concern that funds would be misused by the central government and others involved.

So, what can be done to improve transparency?

Firstly, communication around projects should include all those affected.

In Nigeria, for example, workshops organised by institutions that manage climate funds tend to invite those who are seen as educated. There’s the assumption that information would trickle down to the communities on the ground - such as forest communities. Unfortunately this isn’t the reality in most of the project sites.

The result is that the rest of the community feels alienated and less motivated to join in conservation efforts. Hence, people continue in their usual practice of illegal logging and other forest extraction activities.

Secondly, there’s a need for constant updates between authorities and communities.

For example, mistrust is compounded when authorities don’t explain the reasons for delays in distributing project benefits, which had always been the high point of the REDD+ sensitisation campaign among the people. In addition, it reflects a lack of consideration towards the communities. Most are living in conditions of poverty in rural areas and are being asked to abandon their forest livelihoods without fulfilling promises on the alternatives promised.

Without trusting the process or the alternative income that carbon credits provide, communities will continue to plunder forests, rendering the climate interventions ineffective.

Recipients of climate finance also have a responsibility to improve their communication. They should be proactive in producing detailed reports on how they are spending funds entrusted to them. This has not been done sufficiently yet. This too increases mistrust.

While initiatives like REDD+ have transparency guidelines, my experience in Nigeria was that it’s difficult to follow up on whether local agencies or country focal offices are following them. It was difficult to access information, which will be problematic for reporting on progress.

External evaluators could be of use in these instances. It could prompt caution among project officials knowing that their activities are being monitored and ensure they follow guidelines more carefully – particularly when dealing with communities.