Climate crisis: ‘There has not been a cool month in 628 months’

If one was born in February 1986, s / he has actually never experienced a month with normal temperature. Each month after this has been a warmer than average one 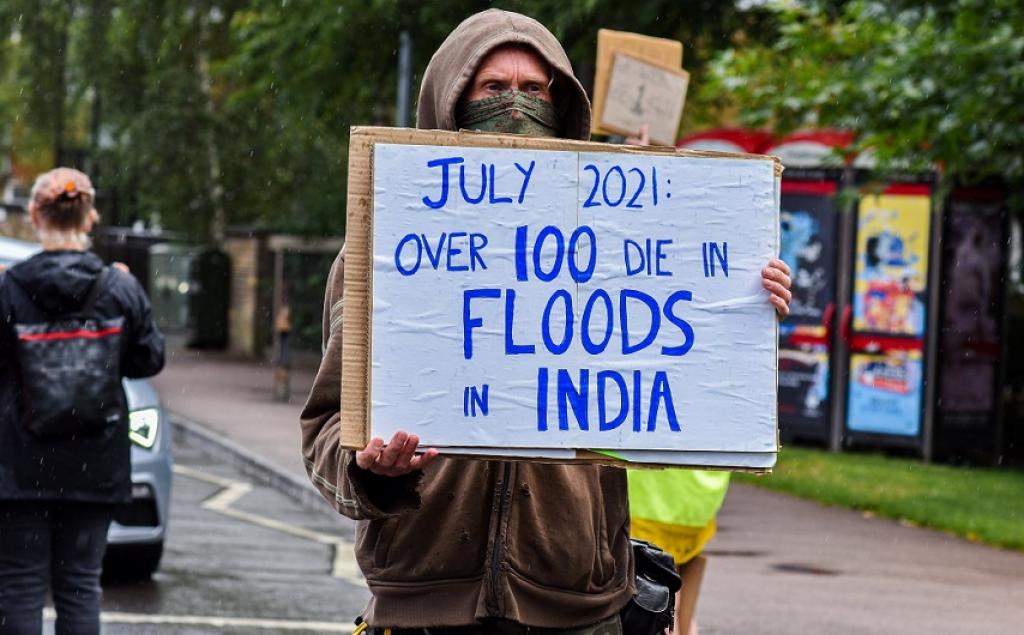 A recent protest by climate activists in the United Kingdom. Photo: @xr_cambridge / Twitter

June-July 2021. The two months are without an analogue in recent climate history. The world reported weather events that were not just extreme in intensity but also contrasting in nature.

They broke records so frequently and widely that scientists started using a new terminology to describe them — ‘record shattering weather events’. Some six billion people were put at risk of an extreme weather event, often enduring two contrasting ones consecutively.

The Intergovernmental Panel on Climate Change (IPCC) will release its much-awaited report on the science of climate change on August 9. This report will assess the impacts of climate change, an update since 2013.

For this period, the novel coronavirus disease (COVID-19) pandemic lost the unchallenged position of over one year front-page coverage in many countries, displaced by cataclysmic floods, unheard of ice sheet collapses in the polar regions, heat waves and forest fires.

“The climate currently behaves like an athlete on steroids,” Erich Fischer, a senior scientist at Institute for Atmospheric and Climate Science, ETH Zurich and a lead author of the UN climate science assessment currently under review, said. Fischer recently published a paper on such “record shattering” events due to global warming.

The global surface temperature for June was the fifth-highest in 142 years, according to the National Oceanic and Atmospheric Administration’s Global Climate Report June 2021. It was 0.88 degrees Celsius above the 20th century average. It was a record.

This month also marked another grim milestone for the warming planet. It was the 45th consecutive June on record to have temperature above the 20th century average; and the 438th consecutive month with above normal temperature.

In April 2017, scientists from Climate Central — an international association of scientists and journalists reporting and researching climate change — released a stunning chart depicting a month by month temperature rise since 1880. “There has not been a cool month in 628 months.”

If one was born in February 1986, s / he has actually never experienced a month with normal temperature. Each month after this has been a warmer than average one.

For this generation, it is an inheritance of a maligned planet. Over their lifetime, there has been consistent and unregulated increase in greenhouse gas (GHG) emissions, consequent rise in global temperature and the resultant change in the climate.

This change manifests in extreme weather events as the planetary atmospheric character changes drastically. To begin with, there were exceptional weather events. Soon, they became frequent and in recent years, they have become ferocious as well.

In 2018, the Special Report Global Warming of 1.5°C had estimated that two-fifths of the global population lived in regions with warming above 1.5°C.

“Temperature rise to date has already resulted in profound alterations to human and natural systems, bringing increases in some types of extreme weather, droughts, floods, sea level rise and biodiversity loss and causing unprecedented risks to vulnerable persons and populations,” warned the report.

All the years since 2015 have been the hottest years on record, each breaking earlier records. The year 2020 was the second-hottest year in history. Atmospheric concentration of GHGs like carbon dioxide, methane and nitrous oxide had also breached records in 2020 and in all possibilities, it would break the last year’s record in 2021.

In April this year, the carbon dioxide concentration in the atmosphere reached the highest-ever monthly level of 416 parts per million.

The world put up with a live demonstration of this in July 2021. This month was a rapid show of what the planet is going to endure as a new normal, defined by its destructiveness and unpredictability. It felt like as if the normal seasons had died and their geographical tags made inconsequential.

July 2021 saw the highest number of extreme events since 2011, with 52 significant disasters striking all the continents. This month, there were 132 per cent more hydrological and meteorological disasters — growing scientific studies often attribute these to climate change (more on this later) — in comparison to July 2020. This month has followed the trend of the last six months of 2021.

This was the highest reported in the first seven months since 2011. During these seven months, at least 18 natural disasters broke records of 10 to 1,000 years in 92 countries.

“No country — developed or developing — is immune. Climate change is here and now,” Petteri Taalas, the secretary-general of the World Meteorological Organization (WMO), said. There was not a single day in July that didn’t indicate neo-normal weather.

On July 13-14, storms in Germany poured down 15 centimetres of rain. The German National Meteorological Service said two months worth of rainfall fell in just two days.

It happened at a time when top one metre soils were saturated with moisture. This caused the deluge that Chancellor Angela Merkel reacted to saying, “The German language can barely describe the devastation.” Belgium, Netherlands and Luxembourg also reported devastating floods.

On the contrary, the Scandinavian countries baked in extreme heat. According to the meteorological department of Finland, June was the warmest month on record.

The town of Kouvola Anjala in Finland recorded the country’s longest heat wave since 1961. For 31 consecutive days, its temperature was above 25°C, the country’s upper limit to declare a heat wave.

Memories of the June heatwave in the United States and Canada were still fresh. On July 9, Death Valley in California recorded a historic 54.4°C; Las Vegas experienced its all time record 47.2°C.

Similarly, Brazil is experiencing one of the worst droughts recorded. The authorities have declared drought emergency for the Paraná Basin and all sectors affected by the drought in the region until November 2021.

By July 20, wildfires had in Siberia had burned at least 1.5 million hectares of lands in the north-east Yakutia region. Wildfires have been raging for the last five months in this region of Russia. Local media has quoted officials terming this summer as the driest in 150 years.

“Residents saw the physical manifestation of what monitors call one of the world’s worst-ever air pollution events when they personally witnessed day turn into night because of the thick smog from this season’s blazes,” reported the Moscow Times.

Dry and hot weather and increasing fires seemed to be the new normal for the planet’s coldest region. Yakutsk, the capital of Yakutia and the “only” city to be built on permafrost, recorded 35°C, in contrast to its maximum of 20°C. This was due to the heat wave triggered by wildfires.

Its impacts spread to faraway areas. According to Copernicus, the European Union’s Earth Observation Program, smoke from the wildfires had reached the North Pole on August 1 after drifting for over 3,200 kilometres.

This also marked a record: The first time plumes from this area had reached the polar region. By mid-August, this would have reached Canada, plunging the country into an air pollution crisis.

This, in turn, fuelled the global warming process by adding more carbon dioxide. The Copernicus Atmosphere Monitoring Service estimated that the forest fires in the Sakha Republic had resulted in the release of 65 megatonnes of carbon dioxide since June 1 this year. This was already above the 2003-2020 average level.

In 2020, wildfires in the Yakutia region resulted in the release of carbon dioxide equal to that of all the fuel consumption in Mexico in 2018. This was 35 per cent more than the 2019 level of carbon emissions due to Arctic wildfires. It is expected that this year, the record of 2020 would be surpassed.

“Rapid Arctic warming has intensified northern wildfires and is thawing carbon-rich permafrost. Carbon emissions from permafrost thaw and Arctic wildfires, which are not fully accounted for in global emissions budgets, will greatly reduce the amount of GHGs that humans can emit to remain below 1.5°C or 2°C,” warned a research paper Permafrost carbon feedbacks threaten global climate goals, published in the Proceedings of the National Academy of Sciences in May this year.

Asia remained the continent worst-impacted by extreme weather events in 2021. Since June, there have been a series of severe flooding events preceded by unprecedented rainfall. The Henan province of China recorded more than its annual cumulative rainfall in just five days starting July 17.

The province’s capital city of Zhengzhou was under water, with half of its annual rainfall dumping down in just six hours on July 20. Chinese media quoted weather officials in Zhengzhou saying the city’s rainfall was a “once in a thousand years” event. A few media reports described it as a “once every 5,000 years” event.

The southwest monsoon in India stalled till July 13. When it activated, it was a sweep of unusually high rainfall events. The state of Goa received rainfall that was 122 per cent above the average from July 10-23, 2021.

The state recorded an average rainfall of 1,047.3 millimetres (mm), against a normal of 471 mm, owing to the increased rainfall activity during the period, said Rahul M, a scientist with India Meteorological Department (IMD)-Goa.

Between July 23 and 24, the North and South Goa districts received up to 23 inches of rainfall over 24 hours. The torrential rains caused landslides and flooded low-lying areas of the state.

Maharashtra’s Ratnagiri district — a state that recorded one of its worst floods killing over 200 people — had broken a 40-year-old record for most rainfall in July. The district received 1,781 millimetres of rainfall between July 1 and July 22, according to data from IMD and the Floodlist website.

The June-July events this year are not just a wakeup call but a heavy jolt to acknowledge the new reality. Climate extreme events are now greater than war and biological events in number and cause more economic losses.

Between 1960 and 2018, the number of natural disasters was 25 times that of wars and 12 times that of financial crises like the one in 2008. Within the natural disaster category, climate-related disasters like cyclones and extreme weather events emerged as the most frequent ones to strike the world and thus, the economy and labour productivity, according to a study Global Productivity: Trends, Drivers, and Policies by the World Bank.

In this period, climate-related disasters accounted for 70 per cent of all natural disasters. And they occurred twice as often as biological disasters like the COVID-19 pandemic.