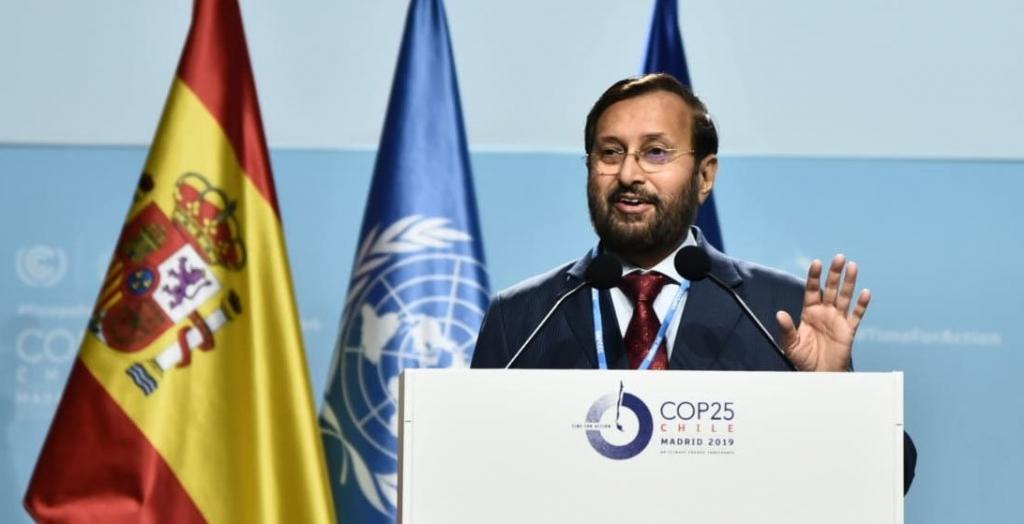 “India has reduced emissions intensity of GDP by 21 per cent and is on track to achieve the goal of 35 per cent emissions reduction as promised in Paris,” the minister said.

He also claimed India was one of the top six global performers when it came to taking climate action.

Javadekar claimed India had already installed 83 gigawatt out of the 175 gigawatt renewable energy target set for it in the Paris commitment, and was now planning to raise the target to 450 gigawatt.

He also pointed out that the government had put in place “a carbon tax on coal production at the rate of $6 per tonne”, and added that it was passed unanimously by Parliament. Incidentally, the said tax was brought during the regime of Manmohan Singh.

The minister rolled out a list of achievements by the government including:

“We have promised the creation of additional carbon sinks of 2.5 to 3 billion tonnes of carbon equivalent through increasing green cover. In the last five years, our green cover has increased by 15,000 square kilometre,” said Javadekar.

“India will be investing about $50 million in water conservation. It has also taken up a target for restoration of 26 million sq km of degraded land by 2030,” the minister said.

Once through with India’s achievement card, Javadekar also asked countries to “concentrate on the implementation of the Paris Agreement and not digress”.

“Unfortunately, annexed countries have not met their Kyoto Protocol targets … I propose that we have three more years to fulfill pre-2020 commitments till the global stocktake takes place for bridging emission gaps,” he said.

He also criticised developed countries for giving “not even 2 per cent … of the promised $1 trillion in the last 10 years,” and for not allowing technological transfer to developing countries at affordable costs.

On Article 6, the carbon market mechanism to be set up under the Paris Agreement, the minister ticked in favour of both market and non-market mechanisms and said the guidelines for the Article should ensure transition of clean development mechanisms under the Kyoto Protocol, a similar carbon trading mechanism that failed.

He thus effectively demanded the carryover of untraded emission reduction certificates that Indian companies hold, including private sector companies but have not been able to sell in the absence of appropriate carbon price.

“We also urge financial support for vulnerable communities worldwide with a strong Warsaw International Mechanism for Loss and Damage,” he said.

“The lecture apparently had everything but lacked focus. The minister merely ticked the boxes,” an Indian climate analyst said.

“It is amazing that while the world has been talking about the climate-triggered disasters which happened in India during 2019, the minister did not say anything about them — neither the heat wave nor the likes of cyclones Fani or Bulbul,” the analyst added.