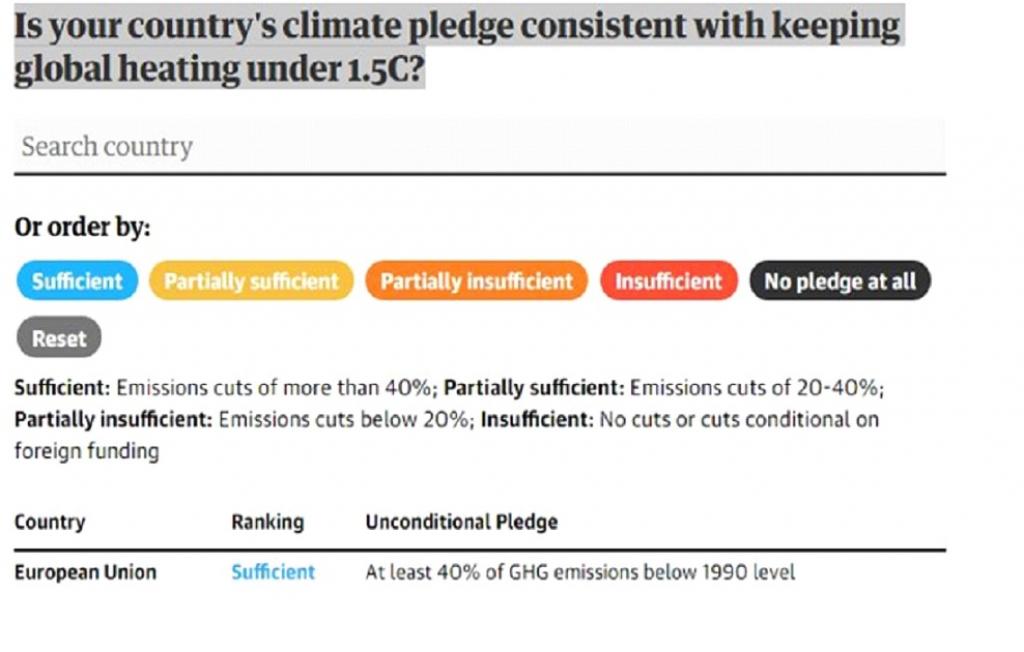 “Is your country’s climate pledge consistent with keeping global heating under 1.5°C?” screams a headline on a webpage of the left-leaning British newspaper, The Guardian covering United Nations Secretary General Antonio Gutteres' pre-CoP speech on December 1, 2019.

Considering how the newspaper has long sought to use its coverage of the climate emergency to push for meaningful change, the answer it gave its core readership (whether they defined themselves as British or European) was surprisingly not a action-engendering “No” but a complacency-inducing “Yes”.

The source of that answer was a report titled The Truth Behind the Climate Pledges by the United States (US)-based Universal Ecological Fund (FundaciónEcológica Universal or FEU-US, a partner of the older Argentinian organisation with the same name). Its headline grabbing finding, that almost 75 per cent of the pledges made by various countries under the Paris Agreement were insufficient to slow climate change was widely reported, including in The Guardian.

That, in itself, was not news. The Paris commitments were made four years ago and it is well-known (and documented) that most countries' climate ambition is just not up to the mark, as edition after edition of UNEP's annual Emissions Gap Report has estimated over the last decade.

The tenth edition, released last week, found that even if all countries meet their climate targets, warming cannot be limited to 1.5°C or 2°C as mandated in the Paris Agreement. We are on track to a 3.2 °C warmer world.

What, then, was the novelty in The Truth About the Climate Pledges? It found that just the European Union (EU) and six other European countries had targets sufficient to slow climate change. For anyone with a passing knowledge of climate change issues, this finding should have raised a red flag.

For it is well-known that the EU's plan is inadequate to limit warming to 1.5°C or even 2°C by the end of the century. Climate activists (including those that write for The Guardian) have long called for the countries in the bloc to go for more aggressive climate action.

The report’s strange findings stem from its methodology. In ranking all countries’ efforts based on a reductionist criteria of whether they had committed to an absolute emission curtailment target of 40 per cent over 1990 levels by 2030, the report is notable in its abandonment of the principle of Common But Differentiated Responsibilities and Respective Capabilities enshrined in the 1992 United Nations Framework Convention on Climate Change (UNFCCC), the bedrock of all global climate action, and reiterated in the Paris Agreement.

The report puts the EU on the same platform as poor countries in Africa, Asia and Latin America, which share none of those attributes. Similarly, Canada, which continues to aggressively build fossil fuel infrastructure and whose per capita emissions are higher than even the US (the traditional climate villain) is better ranked than all of the poor world. Indeed, the ranking actively punishes poor countries by penalising the use of international finance for mitigation, which is also enshrined in climate agreements. 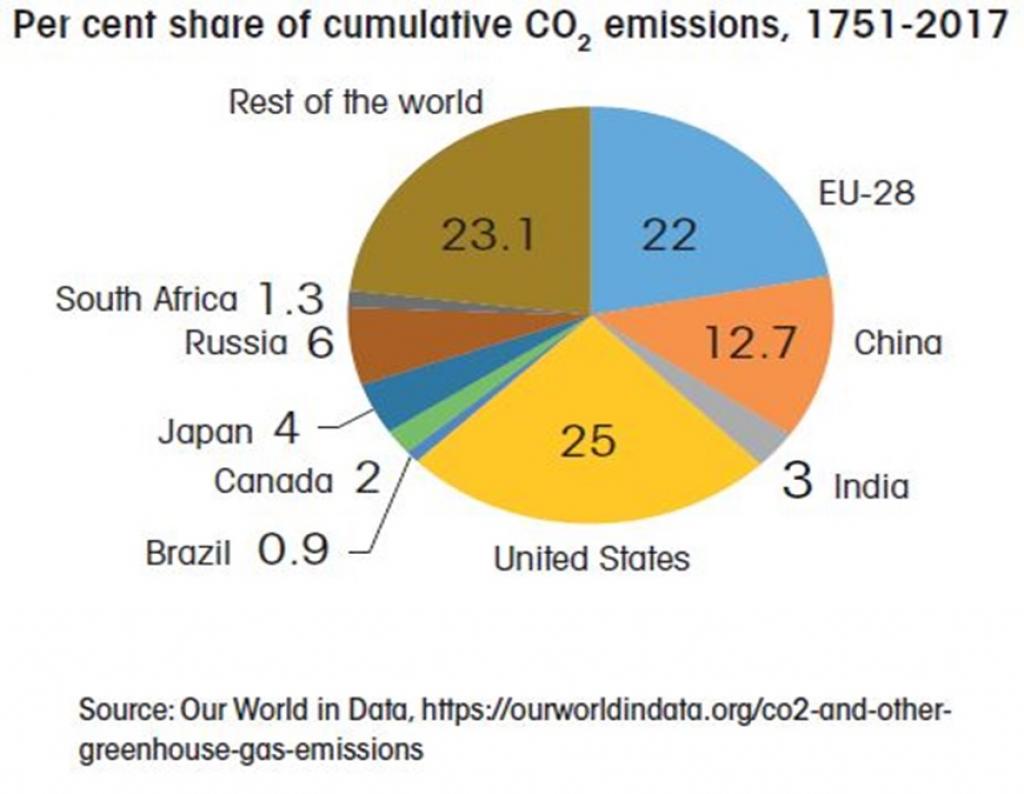 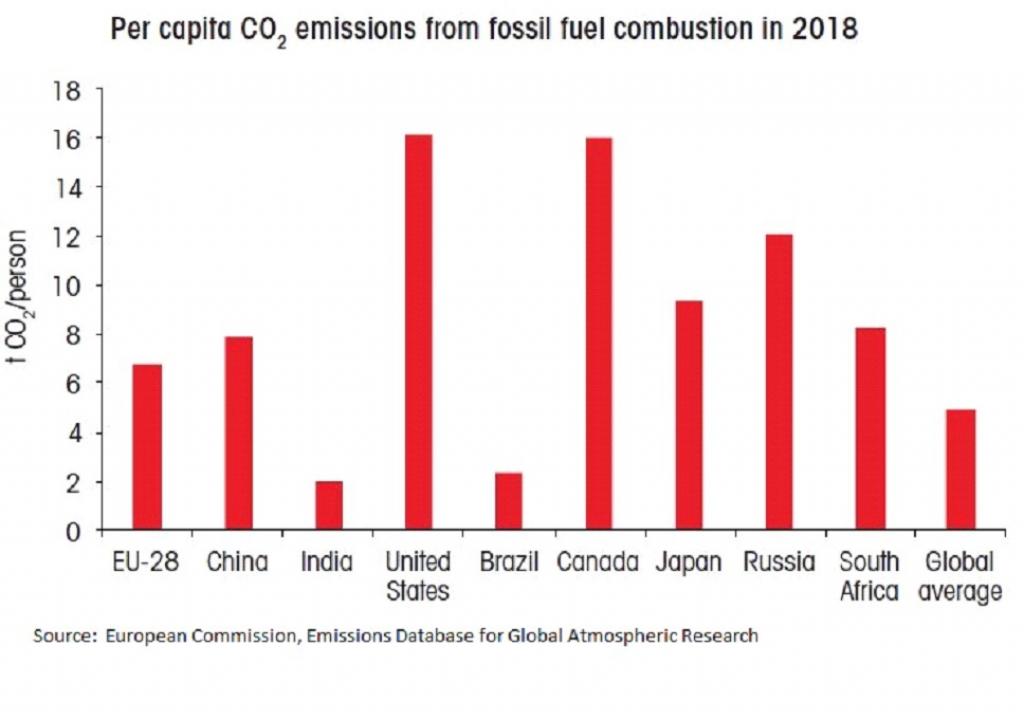 The Guardian is not alone in its uncritical coverage of the FEU-US report; similar stories have appeared in other respected outlets such as Deutsche Welle. This underlines the skepticism that journalists must adopt in technical reporting, rather than just taking an “experts have said” approach. But more generally, it highlights a complete lack of sensitivity in western media for the equity question even in seemingly progressive media outlets.

This lack of sensitivity was exemplified in the reporting of “net zero by 2050” legislation in the UK and in New Zealand earlier this year. Both were uncritically celebrated without recognising that the IPCC’s 2018 report on Global Warming of 1.5°C had set 2050 as the target year to achieve the net zero goal for the world as a whole; developed countries need to do this earlier, around 2030.

For the UK in particular, the country’s official Committee on Climate Change estimated that the cost of net zero was within the cost envelope of estimates for the UK’s old long-term target of 80-95 per cent emissions reductions over 1990 levels by 2050. In other words, the UK’s net zero legislation effectively resulted in no ambition enhancement at all.

Having said all that, there are well known ratings of countries’ climate pledges which take equity into account, which makes The Guardian’s choice of source even more surprising. One such rating is Climate Action Tracker (CAT, a collaborative effort between Climate Analytics and the New Climate Institute, both based in Germany), whose analysis is regularly cited by the BBC, which is hardly known to be an anti-establishment climate justice warrior.

CAT uses a base of 40 studies referred to by the IPCC to construct a rating to measure climate efforts which reflects many varying visions of equity. No major economy of the world was on track to limit warming to 1.5°C. The EU’s “Insufficient” rating was far behind India's “2°C compatible” (see How ambitious are G20 climate targets?). 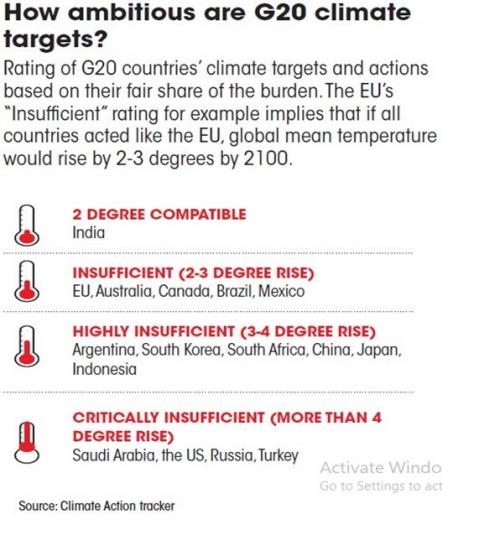 All countries, including India, need to raise their climate ambition. But responsibility, equity and what the Paris Agreement called “differing national circumstances” need to be considered to determine by just how much.

The Guardian has led the way on semantics, having declared a policy of preferring the use of the phrase "climate emergency" to "climate change" in order to engender the required sense of urgency. It now needs to come up with a policy on being sensitive to equity.