Climate Emergency CoP 25: Loss and damage ‘fighting out’ in Madrid 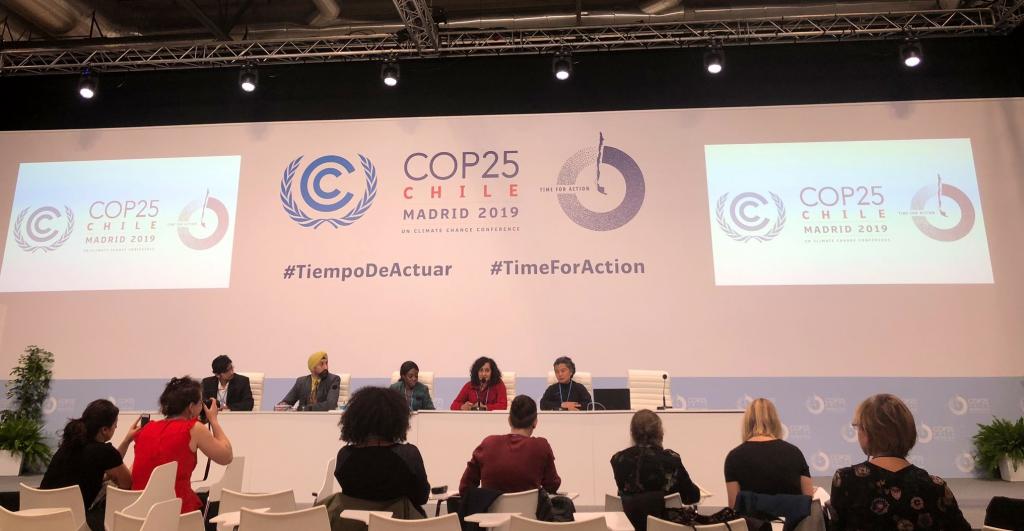 Linking climate financing to a ‘loss and damage’ mechanism seemed to have regained some lost ground at the 25th Conference of Parties (CoP 25) to the United Nations Framework Convention on Climate Change (UNFCCC).

It has been a key demand of developing countries, particularly the least-developed (LDC) and vulnerable countries. But there seemed little hope due to pressure from the United States-led develop countries bloc.

Counter pressure from LDCs, vulnerable and small island countries, however, seemed to have marginally turned the tables, going by a latest draft released early December 13, 2019.

The demand has been a key negotiation agenda along with settlement of new market mechanism under Article 6 of the Paris Agreement from the beginning of the Madrid CoP.

The issue pitch-forked to the front as part of a review this year of the existing Warsaw Institutional Mechanism (WIM) for Loss and Damage.

The mechanism was set up at the 2013 Warsaw CoP under pressure from developing countries to address climate liability of developed countries in addressing the damages already incurred by developing and vulnerable countries.

The US-led group, however, kept it from becoming a financial instrument, fearing it would open a Pandora’s box. Not having a dedicated funding mechanism associated with ‘loss and damage’ will be like a car without fuel, developing and vulnerable countries have always argued.

The final draft, released at 4.50 am, by Simon Stiell (Grenada) with Minister Ola Elvestuen (Norway) recognised “the urgency of enhancing the mobilisation of action and support, including finance, technology and capacity building”. It added long-term and non-economic damages under the category, a long term demand of the climate workers.

The draft sought an expert group to be set up in 2020; a ‘Santiago network’ to catalyse technical support; developed countries to scale up finance; and Green Climate Fund to provide financial support.

“It is marginally better than before but still far less than it should have been. There is much more reference to available finance than generating new finance. It hardly makes sense as available finance is found inadequate to support existing requirements like mitigation and adaptation, agendas other than loss and damage” said Harjeet Singh, global lead of climate change in Actionaid and a ‘loss and damage’ expert.

“Rich countries responsible for climate change, particularly the US, Australia and Japan, are using every opportunity to water down proposals (of financial linkage),” he added.

An Indian expert explained the relevance of loss and damage in India’s perspective: “Take the recent cyclone that devastated Sundarban in southern fringe of state of West Bengal in India — It is well known that Sundarban, spread across India and Bangladesh, is a hotbed of climate change and has been repeatedly affected by extreme weather events in recent time,” the expert said.

“The latest cyclone, named one of the six biggest cyclones in 2019 by World Metrological Organisation in Madrid , caused financial loss in tune of Rs 23,000 crore. Who will take responsibility of this huge financial loss?” the analyst asked.