Two of south Asia’s megapolises, Mumbai and Karachi lie in the path of Cyclone Tauktae 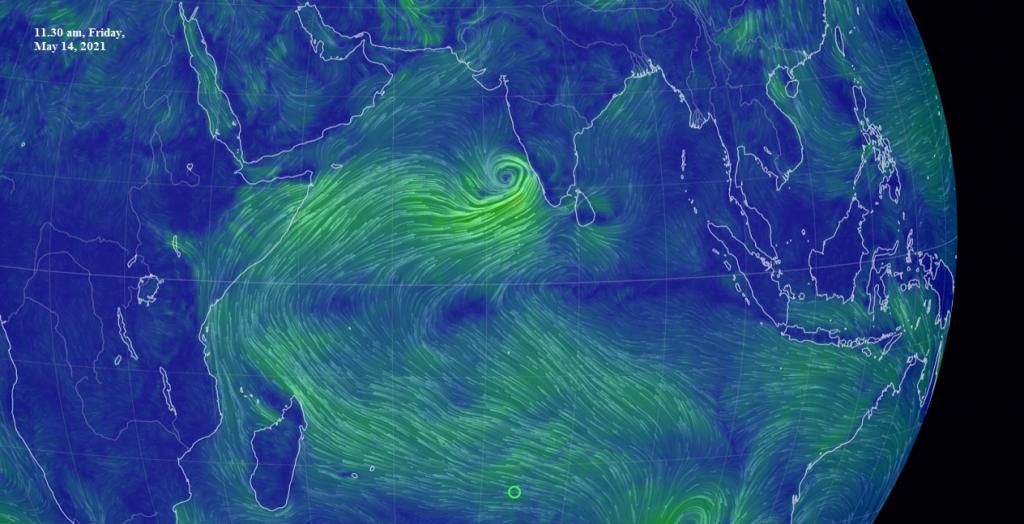 The first cyclone of 2021 may be here, and quite a storm it can be. Cyclone Tauktae is likely to form May 16, 2021 in Arabian Sea. The system must be watched closely for rapid intensification, which can make predictions tough.

The current characteristics of the storm indicate rapid intensification. The India Meteorological Department (IMD) said in its latest update on the cyclone that a low pressure area had formed in the south eastern Arabian Sea close to Lakshadweep on the morning of May 13.

The IMD, in its latest cyclone update issued on the afternoon of May 14, said a depression had formed in the early morning hours of the same day. The depression, which lies 360 kilometres west-south west of Kannur in Kerala, is likely to intensify into a deep depression by the evening of May 14 and a cyclone by the morning of May 15.

IMD has forecast that the track of the cyclone will take it in the north-north eastward direction till the evening of May 14 and in a north north-westward direction after that, towards the Gujarat coast.

But this scenario is changing in a quick and uncertain way due to unusual warming of the Arabian Sea which itself could be a consequence of global warming resulting from the emissions of greenhouse gases from human activities.

Global Forecasting System data from the United States’ National Centers for Environmental Prediction, visually represented on two different online platforms (Earth Nullschool and Windy), shows that a depression has already formed and that Cyclone Tauktae might form by the evening of May 14.

This would be much ahead of the timeline forecasted by IMD, indicative of rapid intensification and putting in imminent danger, the western coastal states of India.

IBM’s The Weather Channel reported that the cyclone formation might happen Friday (May 14) or Saturday (May 15), much ahead of IMD’s current May 16.

IMD’s current prediction for the track of the cyclone is in a north-north westward direction from its current position towards the Gujarat and Pakistan coasts. The agency said the cyclone might strengthen further and reach the Gujarat coast by the evening of May 18.

Many of the weather models predict that the track of the cyclone will be really close to the coast which means that coastal areas of Kerala, Karnataka, Goa and Maharashtra will experience heavy rainfall beginning May 14 and continuing over the weekend, according to The Weather Channel.

The private weather monitoring company also predicts that the cyclone would be one of the strongest that the western coast of India has witnessed in over two decades. Two highly populated megapolises of south Asia, Mumbai and Karachi will be on the path of the cyclone over the weekend.

Roxy Mathew Koll, a climate scientist at the Indian Institute of Tropical Meteorology, Pune and a lead author of the Intergovernmental Panel on Climate Change’s Special Report on the Ocean and Cryosphere in a Changing Climate, told Down To Earth:

The frequency and intensity of cyclones in the Arabian Sea have increased in the recent years. This is because of the rapid warming that has made the relatively cooler Arabian Sea (compared to the Bay of Bengal) a warm pool region that can actively support cyclone formation.

Scientists from the National Oceanic and Atmospheric Administration and Princeton University in the United States and University of East Anglia in the United Kingdom analysed 90 peer reviewed articles to understand the impact of a changing climate on tropical cyclones — a combined named used for hurricanes, cyclones and typhoons.

They concluded that there could be a five per cent increase in maximum cyclonic wind speeds if the world warms by two degrees celsius by 2100. The study was published in the ScienceBrief Review in March 2021.

Ocean warming has made some new challenges also. Cyclones are now intensifying rapidly since warm ocean waters act as a fuel for them. Extremely severe cyclones like Fani and Amphan intensified from a weak to severe status in less than 24 hours due to warm ocean conditions. State-of-the-art cyclone models are unable to pick this rapid intensification because they do not incorporate the ocean dynamics accurately.

Rapid intensification happens when there is an increase of maximum sustained winds of a cyclone by at least 55 kilometre per hour within 24 hours.

All these conditions are true for Tauktae as well. “It developed into a low-pressure system earlier than forecasted. As of now, it is forecasted to develop into a cyclone by May 16. Given that the ocean and atmospheric conditions are now favourable, chances of early cyclone formation and rapid intensification cannot be ruled out,” warned Koll.