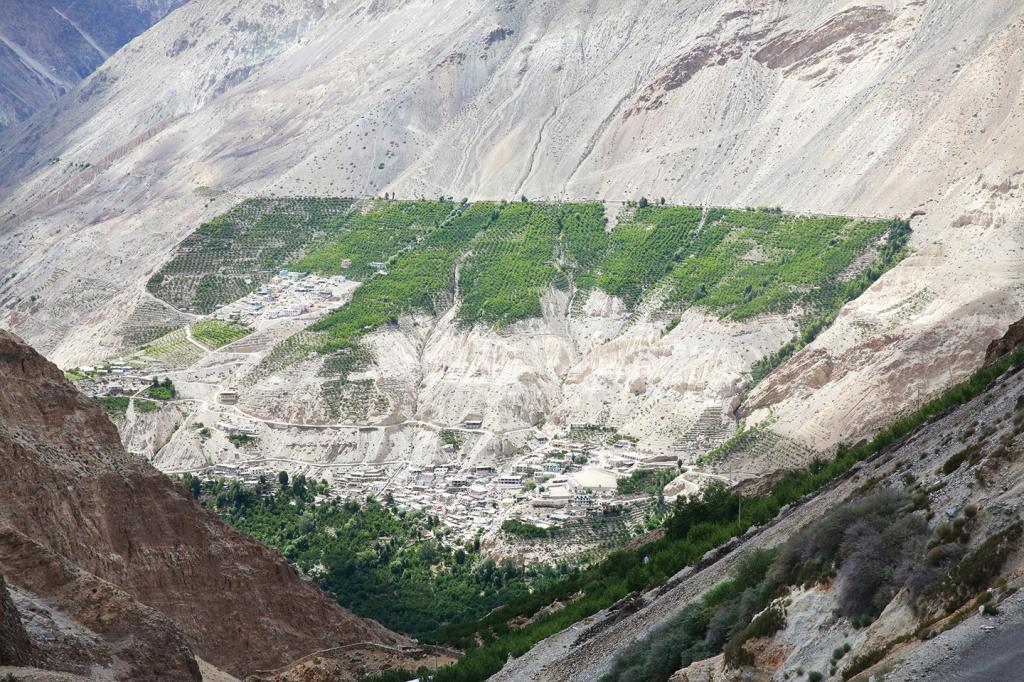 Santoshi Negi, a 45-year-old farmer from Chango village of Kinnaur district, is grappling with a problem that she was not familiar with a few years ago. “Is there any pesticide available for red spider mite,” she asked the officer manning the recently set up horticulture office in her village. Hearing a no, she hurried to the block headquarters 40 kilometres away in Pooh.

Negi is in search of chlorpyrifos, an organophosphate pesticide banned in several countries, to save her 0.5-hectare apple orchard.

Devinder Singh Loctus, a 62-year-old farmer in Pooh, has an explanation for her problem. “Good soil moisture is needed to keep apple trees’ roots healthy. But it has been reducing due to lesser snowfall. Even the permafrost, which ensures year-round moisture in the soil, is decreasing,” he said. In his orchard, the apple trees are infected with all kinds of pests — stem borer, wooli aphids and red spider mites.

Increasing use of pesticides is disturbing the mountain ecology. It also kills the lady-bird beetle and green lacewing bug that are natural predators of pests, compounding the crisis. But most farmers are neither bothered about this, nor about the fact that land is fast degrading in their district.

According to the SAC Atlas, more than 72 per cent of the district is undergoing desertification and degradation. The mountains which once remained snow-clad now look green, dotted with patches of apple orchards and pea farms. This was not the case earlier.

Residents say traditionally they used to grow barley, wheat and potatoes in the cold arid region of upper Kinnaur, while apple orchards were grown only in lower Kinnaur.

With rising temperatures, upper Kinnaur has become suitable for apple. Indigenous trees like juniper, pine, wild apricot and Robinia pseudoacacia can rarely be spotted in the landscape.

Along with rising temperatures, the region has witnessed other climatic changes. While snowfall has reduced affecting the soil moisture, the intensity of rains has increased aggravating soil erosion.

The average annual rainfall in the district is 816 mm. Increased rainfall causes soil erosions and reduced snowfall causes loss of moistures in the soils. According to IMD data between 2014 and 2018, Kinnaur has hardly witnessed normal precipitation.

In last five years, except couple of months in winter season, there has been departure of up to 100 per cent precipitation. Also, precipitation in winter months became quite erratic.

After three years of lull in November 2018 the precipitation was 104 per cent than normal.

The change in climate pattern over the years brought change in lifestyle of the people. Water guzzling apple orchards and rampant tourism has been affecting the region.

“Since apple trees are water guzzling, the demand for water supply in upper Kinnaur has shot up,” said Sushil Sana, deputy village head of Pooh gram panchayat. He explained that there was traditional system of water sharing through Kulh, a canal system to bring meted snow water to field.

An apple plant requires 250 litre of water in a week. “Communities do not even share any water with the forest department for afforestation,” said RB Negi, a forest range officer of Pooh block.

This May, scarcity was so severe that people employed trucks to bring water from distant springs for their orchards. Panchayat members initiated a Rs 45-lakh project to bring water from the Sutlej river using power generators and pipes, but the project failed due to high silt.

“In the late 19th century, our ancestors had to leave Rishidogra village and settle in Pooh due to water crisis. If the situation prevails, history might repeat,” said Sana.

(This was first published in Down To Earth's print edition dated September 1-15, 2019)