Diet to save: Our food system is fuelling climate change; are we ready to switch to a new diet? 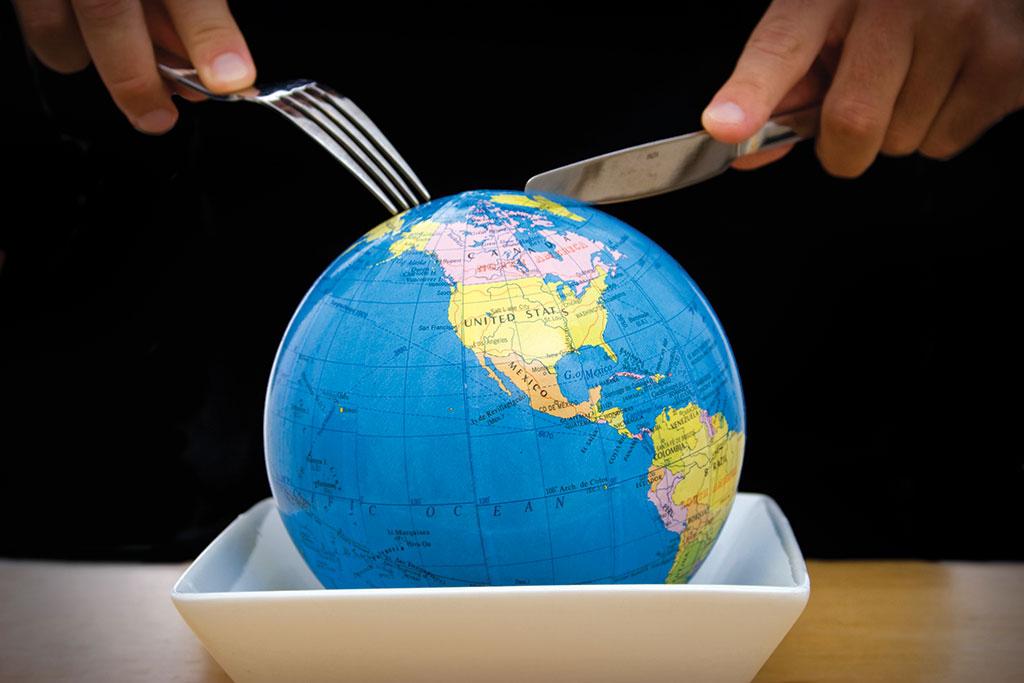 It is the world’s largest production line: Starts with growing and harvesting crops, moves on to processing food, then transporting and marketing it; eventually the consumption and disposal of the waste. But the process that sustains 7.8 billion people also emits 21-37 per cent of all greenhouse gases a year that can be traced back to human activities.

This was flagged by Enhancing NDCs For Food Systems Recommendations For Decision-makers, a September 2020 report by United Nations Environment Programme (UNEP) in association with non-profits World Wildlife Fund and EAT as well as policy advisor Climate Focus BV.

Our food system is thus as polluting as sectors that generate electricity and heat (25 per cent of greenhouse gases emitted) and industries (21 per cent); it is also more polluting than transportation (14 per cent) and buildings and energy usage (16 per cent). Now, try to gauge the additional emissions as we churn out more to feed 10 billion mouths by 2050. 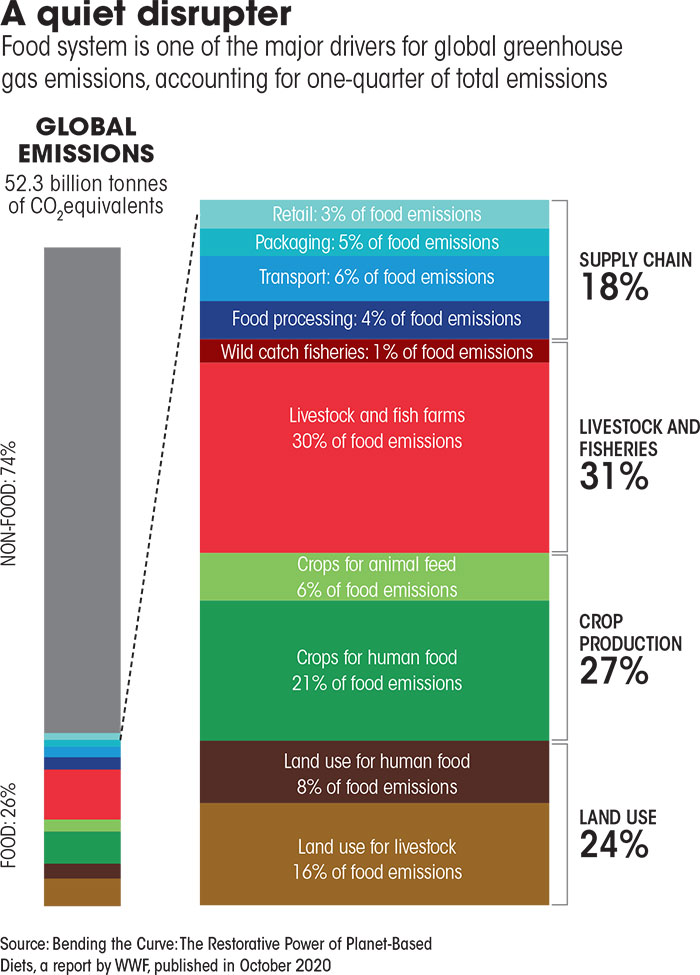 Researchers from the United Kingdom and the United States recently created an experimental model to estimate emissions from food production. They created a climate-utopian condition in which all sources of greenhouse gases other than food production were halted; it was a world completely shifted to renewable energy, electric vehicles, sustainable buildings and non-polluting manufacturing.

Yet, the food system alone contributed enough greenhouse gases to heat up the planet above the 1.5 degree Celsius target under the Paris Agreement sometime between 2051 and 2063, they noted in the November 2020 issue of the journal Science.

This may come as a surprise to those who think of plants as carbon sinks. It is true that plants remove carbon dioxide from the atmosphere through photosynthesis. But they release large amounts of carbon dioxide when decompose.

Then there are several other stages in a food system directly or indirectly responsible for carbon emis sions. For instance, felling forests to make way for farms and pastures removes a major carbon sink and thus indirectly contributes to emission load in the atmosphere. Running farm machinery on fossil fuels and manufac turing of agrochemicals and fertilisers too emit greenhouse gases. Even cattle burps release methane, which is a far more potent greenhouse gas than carbon dioxide.

According to the September 2020 UNEP assessment:

But the authors of the Science study say global warming cannot be limited to 1.5°C just by employing any one of the emission reduction strategies. They recommend a dramatic food transformation in addition to a complete transition away from fossil fuels to avert harmful impacts of climate change.

The onus is now on the food plate. Unfortunately, unlike other emission-intensive sectors where cleaner and viable alternatives are available for switching to low-carbon energy — electricity can be sourced from photovoltaic systems instead of coal-based power plants; one can use electric vehicles instead of diesel cars — the ways to decarbonise food are less clear. Carbon emissions are integral to the biological system. Besides, one cannot just stop eating.

Since 2018, scientists from world over have been working overtime to understand the unexplored links between food systems, human health and climate change, and figure out how and where this essential element of life has gone awry. 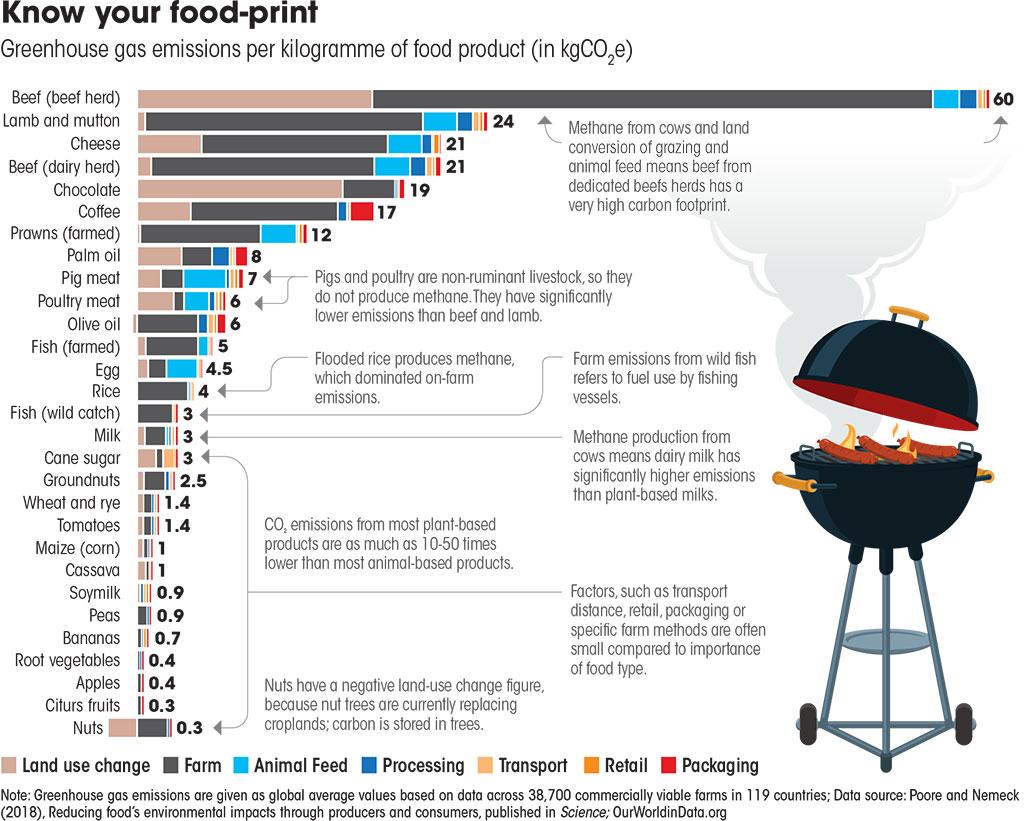 A crack in the plate

Some 200 years ago, English economist and demographer Thomas Robert Malthus predicted that population growth will always outrun the food supply. The modern food system has proved him wrong; it has managed to keep pace with the exploding population; famine has ended in much of the world.

Between the 1960s and 2010s, the global population rose by 142 per cent, whereas cereal yields increased by 193 per cent and calorie production by 217 per cent, says a report in journal Global Sustainability in April 2019. Yet neo-Malthusians spot worrying signs; hunger, malnutrition and diseases continue to haunt us.

“More than 820 million people have insufficient food and many more consume low-quality diets that cause micronutrient deficiencies and contribute to a substantial rise in the incidence of diet-related obesity and diet-related non-communicable diseases, including coronary heart disease, stroke, and diabetes,” according to Food in the Anthropocene, a report published in February 2019 by the EAT-Lancet Commission on Food, Planet, Health.

The commission brought together 37 leading scientists from worldwide to answer one question: Can we feed a future population of 10 billion people a healthy diet within planetary boundaries? It set global targets for food systems that are environmentally sustainable and benefit human health.

Since all of the 14GtCO2e from the food system cannot be eliminated by 2050, as it is intrinsic to the biological processes in plants and animals, the commission has set the planetary boundary for food production emissions, or carbon budget, at a maximum of 5GtCO2e. The remaining 9Gt would need to be mitigated through activities like shifting diets, changes in production practic es, decarbonising food value chain and reducing food loss and waste.

However, no combination of improved productivity and reduced waste is sufficient to bring greenhouse gas emissions within the planetary boundary under the “business as usual” dietary scenario. The commission has thus proposed the first global diet, Planetary Health Diet, which can reduce urban emissions by 60 per cent in 10 years.

This diet is based on healthy and sustainable ingredients produced within planetary boundaries and adaptable to local contexts. It discourages over-consumption of any food to the extent that it impacts biodiv ersity, environment and human health, and proposes a shift to more plant-based diets and reduce consumption of meat-based diets. 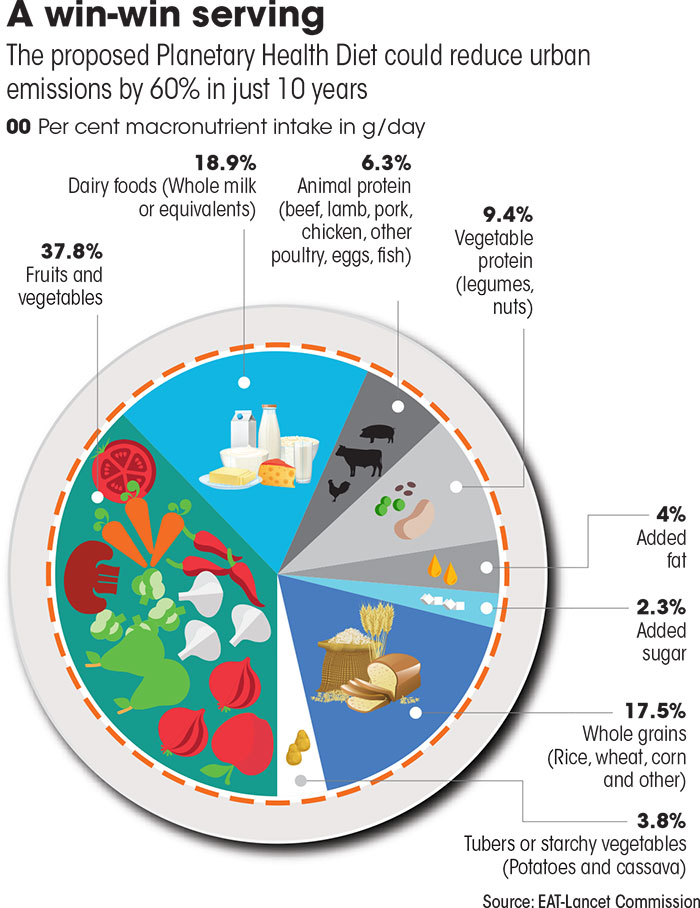 “Transformation to healthy diets by 2050 will require substantial dietary shifts. Global consumption of fruits, vegetables, nuts and legumes will have to double, and consumption of foods such as red meat and sugar will have to be reduced by more than 50 per cent,” writes Walter Willett, professor at the Harvard TH Chan School of Public Health, who is also the first author in the EAT-Lancet report.

Since the report, several organisations have come forward to explore the potential of planet-based diets and recommend how it can be implemented.

Equity back on the table

EAT says increasing consumption of fruits, vegetables, legumes and nuts and lowering consumption of meat and dairy that goes beyond current national dietary guidelines (NDG) would reduce the G20 food-print to 40 per cent of the carbon budget for food. However, NDGs of G20 countries will have to be ambitious enough to free up part of the carbon budget for food to create space for poor countries so that they improve diets and increase their consumption of animal-source foods to tackle undernutrition without further destroying the planet.

A similar report by WWF in October 2020 also highlights that global cooperation would be imperative to ensure a healthy population in a healthy planet. For instance, Malawi has to increase its consumption of dairy, fish, and fruits and vegetables to reduce the prevalence of under-five overwei ght and under-five wasting, says the report that analysed food consumption patterns in 147 countries and six regions and NDGs of 75 countries.

This would lead to an increase in per capita emissions by 30 per cent. This can be compensated by countries like Sweden, Australia, Argentina, Brazil and France who need to reduce food-emissions. Sweden’s per capita food-emissions are over double Malawi’s. To reduce it by 50 per cent, Sweden would need to reduce consumption of red meat by 90 per cent and dairy by 69 per cent, notes the report Bending the Curve: Restorative Power of Planet-Based Diets.

Both the reports, however, highlight that NDGs are not aligned with those of a healthy diet and most countries are not ambitious enough to bring food systems within planetary boundaries. While the EAT-Lancet Commission says countries will have to make an effort to mitigate the 9GtCO2e emissions outside the carbon budget for food, the WWF report says current NDGs would help reduce it only by 1Gt.

“Dietary changes take place at the local level, so it is important to translate the global agenda into actionable national-level analysis,” says Brent Loken, WWF’s Global Food Lead Scientist and lead author of the report.