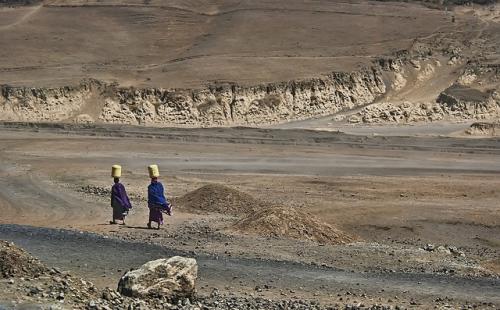 In view of the devastating effects of El Niño, United Nations leaders on Wednesday stressed on strengthening resilience to safeguard the livelihoods of poor people worldwide.

More than 60 million people—about 40 million in east and southern Africa alone—are projected to be food insecure due to the impact of the extreme weather event.

The heads of three United Nations (UN) agencies urged for greater preparedness to deal with the possible occurrence of a La Niña climate event later this year.

The Horn of Africa, southern Africa, Central America's Dry Corridor, the Caribbean islands, South-east Asia and the Pacific islands have been hit the hardest.

Scientists have predicted an increasing likelihood of the opposite climate phenomenon, La Niña, developing. This will increase the probability of above-average rainfall and flooding in areas affected by El Niño-related drought.

The UN estimates that the number of people affected by the combined impacts of El Niño and La Niña could top 100 million.

Participants noted that almost US $ 4 billion was required to meet the humanitarian demands of El Niño-affected countries. Almost 80 per cent of this is for food security and agricultural needs.

FAO Director-General José Graziano da Silva warned that the impact of El Niño on agricultural livelihoods had been enormous and with La Niña on the doorsteps the situation could worsen.

“The massive impact of this global El Niño event, exacerbated by persistent poverty and chronic hunger in many countries, threatens the food security of millions of people who are the least able to cope,” WFP Executive Director Ertharin Cousin said.

International Fund for Agricultural Development Associate Vice President Lakshmi Menon reminded the global community not to forget about small-scale farmers, who are the most vulnerable to extreme weather events.

Drought has gripped large parts of east and southern Africa and affected Indonesia, Papua New Guinea and Viet Nam. El Nino-associated storms have wiped out harvests in Fiji and some of its neighbouring island states.

Participants noted that in southern Africa a three-month “window of opportunity” exists before the 2016-17 planting season begins and that adequate interventions, including agricultural input distributions, are needed to avoid the dependence of millions of rural families on human aid.

In Southeast Asia, drought and saltwater intrusion are threatening the livelihoods of farmers in Viet Nam and impacting household food security and cash availability.

In the Pacific region, the Federated States of Micronesia, Marshall Islands and Palau have already declared a state of emergency. Below-normal rainfall is forecast to continue across the northern and western Pacific areas, threatening the livelihoods and well-being of 1.9 million people.