Nineteen extreme weather events in 2019 claimed 1,357 lives, with heavy rain and floods accounting for 63 per cent of these deaths, revealed Down To Earth’s State of India’s Environment 2020: In Figures report.

The most lives were lost in Bihar, with people dying from floods and heavy rain (306), thunderstorms (71) and heat wave (292) between May and October.

Neighbouring Jharkhand was the least-affected by the calamities, with 12 people dying from thunderstorms and 13 dying from heat wave between March and October.

In Maharashtra, 136 people died from floods and heavy rain, 51 died from lightning and 44 died from the heat wave between June and September.

There was a 69 per cent increase in the number of heat wave days between 2013 and 2019 as well, the report said. Over 5,300 people died from heat waves in the past seven years, the report pointed out.

Cold waves increased by 69 per cent within a year, between 2017 and 2018, with the latter year reported to have an extremely cold winter, with the most casualties (279) in the past seven years. The Union government decreased its expenditure on natural disasters, even as the impact suffered by people from them increased, according to the report. 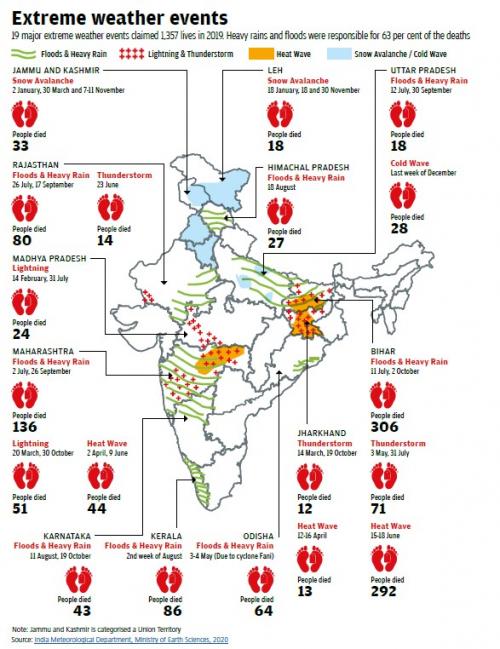 Source: Down To Earth’s State of India’s Environment 2020: In Figures

More than 2,000 people lost their lives from natural calamities in 2018-19, with more than a million houses damaged and 123,014 cattle lost in the same period, the report said.

Kerala, with the most lives lost between 2018 and 2019 at 477, had the greatest number of houses damaged at 654,062 and the most number of cattle lost as well, at 76,830. Floods in the state in 2018 resulted in a large number of people dying and significant property damage as well.

The southern coastal state saw a sharp increase in these parameters, compared to 2017-18, when 130 people died from natural calamities, 5,880 houses were destroyed and just 77 cattle were lost.