Heavy rains in Assam and Meghalaya, as well as unplanned embankments cited as reasons for flooding 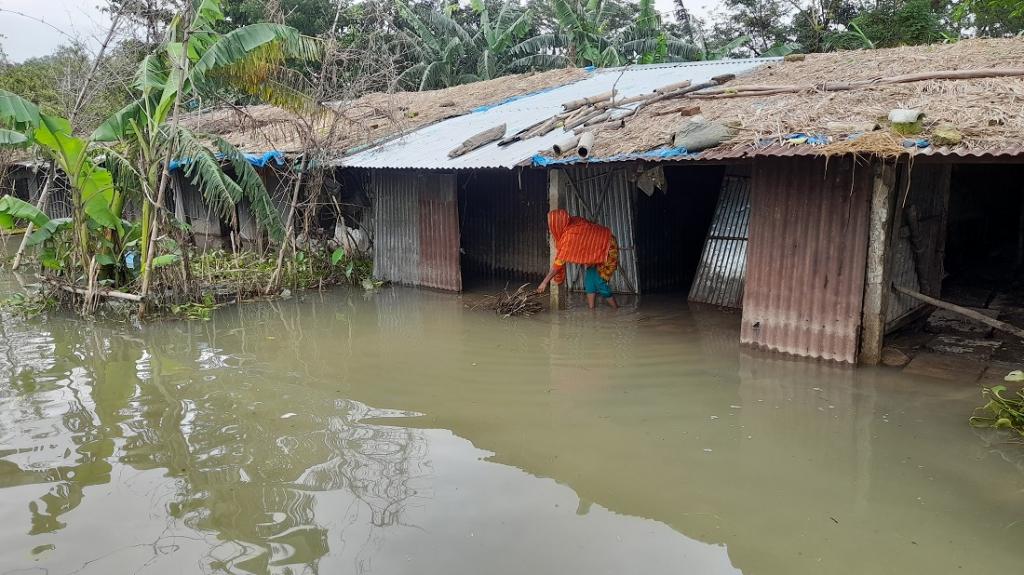 Two rounds of flooding within a month in northeastern Bangladesh’s Sylhet division have left four million people fighting for survival, with their houses, paddy fields, fish ponds and livestock washed away.

The floods have affected Sylhet city and district and neighbouring Sunamganj and Moulvibazar districts. All three districts are located in the Sylhet division, one of the eight divisions of Bangladesh. Sylhet city is Bangladesh’s fourth-largest.

The Bangladesh Flood Forecasting and Warning Centre has cited extremely heavy rains in Meghalaya and Assam, as well as unplanned embankments as the causes for the two rounds of floods. The two Indian states are the locations of catchments for most rivers flowing into the Sylhet division.

Assam, home to the valley of the Barak (Surma) river, which flows into Sylhet, has also been receiving heavy rains for three days. Haflong in Assam’s North Cachar Hills, upstream of Sylhet, had also recorded devastating floods recently.

Residents and officials of Companiganj and Gowainghat upazilas or subdistricts of Sylhet district said there was knee-deep or waist-deep water in many places June 16 afternoon.

Many people were forced to take shelter on the roofs of their houses on the morning of June 17. They have no boats to be transported to safer locations despite continuous rain.

The Bangladesh Army is currently being deployed to help marooned people in both upazilas. The government has also postponed the Secondary School Certificate examination, scheduled for June 19, due to the deteriorating flood situation.

The situation is also dire in neighbouring Sunamganj district. Almost all upazilas of the district as well as Sunamganj town are now flooded. Direct road communication has been cut off. More than 100,000 people have been affected by the floods in the district.

Nader Bakht, mayor of Sunamganj Municipality, said, “I have not seen so much water in this town since 2004. The water level in the second phase of flooding this month is higher than in the first phase in May.”

Bakht said if the water level rose further, the situation could take a serious turn.

Stories of property and livelihood losses due to the two rounds of flooding are emerging from the region.

“Last month’s floods submerged our house for 11 days. My eyes were always on the television screen in anticipation of good news. I prayed that the flood waters would recede quickly. They did. But just three weeks later, our house sank again,” Dipti Rani, who lives in the Chalibandar neighbourhood of ​​Sylhet city, told this reporter.

Khaleda Begum, a resident of Sultanpur village in the Sadar upazila of Sunamganj district, has also suffered. The first round of flooding destroyed her house.

Flood waters have re-entered the structure in the second phase. Begum, who lives with her two children and mother-in-law, is now having an even harder time managing her family’s survival.

Jalfu Mia, a farmer who was twice affected by the floods, said, “We suffered a double whammy. We have no food, no shelter and no money. Where will we go now?”

Mia had planted boro paddy, which is grown as a Rabi crop in West Bengal and Bangladesh. His crop was submerged in water during the first phase. He then lost his house and is now destitute.

The first phase of the floods destroyed the houses of 12 families in Vadertek village of Bishwambharpur upazila in Sunamganj district. Many of them have taken shelter on the roadside.

Mohan Mia, a resident of Vadertek, said, “We are poor people. I have lost my house along with the paddy. Now, I work as a daily-wage labourer. If I get work, I can eat, otherwise not. We don’t know what will happen in the next few days.”

Civil society leaders fear the two floods could trigger a humanitarian catastrophe in the region. They called on people to stand by flood victims.

“It is important that Bangladeshis within the country and overseas come forward to help the victims. The rivers of Sylhet need to be dredged to avoid floods,” Chamir Mahmud, joint general secretary of the Sylhet branch of the Bangladesh Environment Movement, said. Sylhet has a large diaspora worldwide.

Mishfaq Ahmad Chowdhury, president of the Sammilita Natya Parishad’s Sylhet branch, said, “We appeal to the rich and the expatriates to come to the aid of flood victims. We demand the government declare Sylhet a disaster-prone area.”

Mojibar Rahman, deputy commissioner, Sylhet, said the administration was working to deal with the flood situation.

“Initiatives have been taken to evacuate those whose homes have been submerged, to shelters or safe places. Relief assistance is being provided to overcome the food crisis. The Army is engaged in rescue operations,” he said.