From apples to vegetables in Sikkim

Apple orchards are travelling up the mountains in Sikkim and elsewhere in the Himalayas, as climate change makes the lower slopes too warm 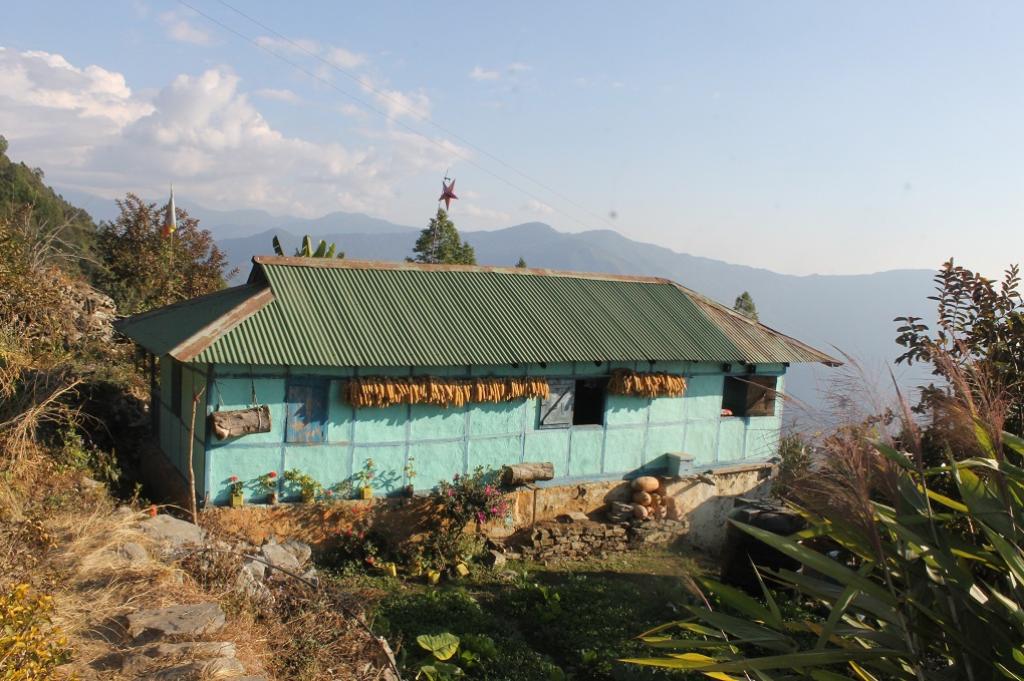 A house of a farmer in Sikkim. Credit: Nita Narash

The winter was at its peak when I made my visit to the village of Lachung, in the Indian state of Sikkim, in 2017. Lachung means “small mountain pass” in Tibetan, and is situated 2,900 metres above the sea level. It is unbelievably beautiful, with snow-capped peaks visible from the main town. Though it is still categorised as a village, it is as big as any town in Sikkim. This area is dominated by the Bhutia tribal group, and comprises of the villages of Lachen, Lachung and Chungthang.

Shaken by the 2017 floods and landslide, they shifted to nearby areas. Even after months, the 14 houses and office buildings that were submerged in June 2017 were still under water. The community was working to drain water from a lake formed by boulders blocking the river.

Once upon a time Sikkim depended upon Lachen–Lachung for its main cash crop, apples. Over the past few years the apple yield has fallen drastically. Instead, as infrastructure has developed, many Bhutia families are now engaged in village tourism. Most of the families have started hotels. Along with the hotel business the local inhabitants have diversified into growing vegetables. This produce is also used in hotels. The demand from tourists for Rajma (red beans) has led to its cultivation, and greenhouses have been set up to meet the demand for tomatoes and green chilis, crops that were rarely grown earlier. 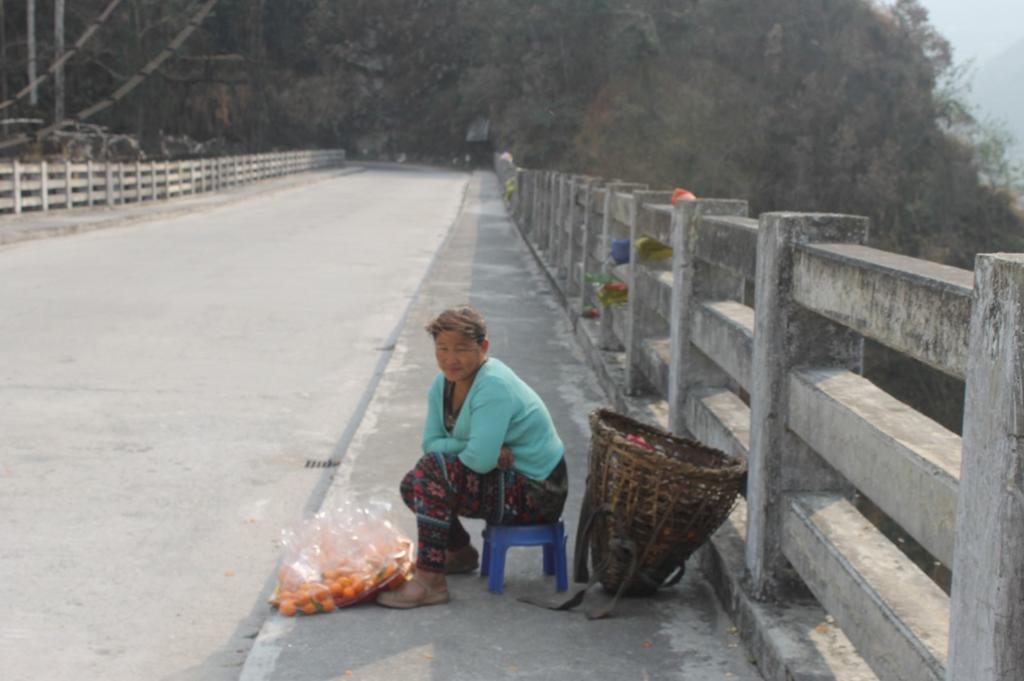 Another change is happening as traditional arts disappear. Women who were experts in weaving blankets, pangdens (part of a married women’s dress in the area) and carpets find that it pays little for the amount of work they have to put in. The skill is rarely passed on to the younger generation any more.

But the main change is the death of apples. Rainfall has become erratic, and rising temperatures have meant limited snow. Dawa Doma has a vague memory of her parents plucking many basketsful of green and red apples during her childhood. But now, she says, “It’s a forgotten dream.” Almost every second house with any vegetation has an apple tree but the trees no longer bear fruits worth anything.

Sonam, a homemaker, says, “Crops were normal this year and so was the harvest. We do not look for anyone to work for us .We do it ourselves. Our potato, cabbage, wheat and maize were all satisfactory. Apple growth was not good. Apple trees are above Thalarla (at a higher altitude).”

She runs a Home Stay. The traditional cattle at this altitude is the yak. But now Sonam makes tea for visitors with cow’s milk since her yaks are far away in the forest. Pipon, the elected head of the local body, said the village no longer has fodder sufficient for yaks, so the residents keep them in the forest. Earlier yak tents and tails were sold to Tibet, but this is another trade that has disappeared as the border to Tibetan areas closed. No exports have survived. But other products from yak still sell. Butter and churpi (cottage cheese) made of yak milk is sold in the big towns of Gangtok or Kalimpong in West Bengal. 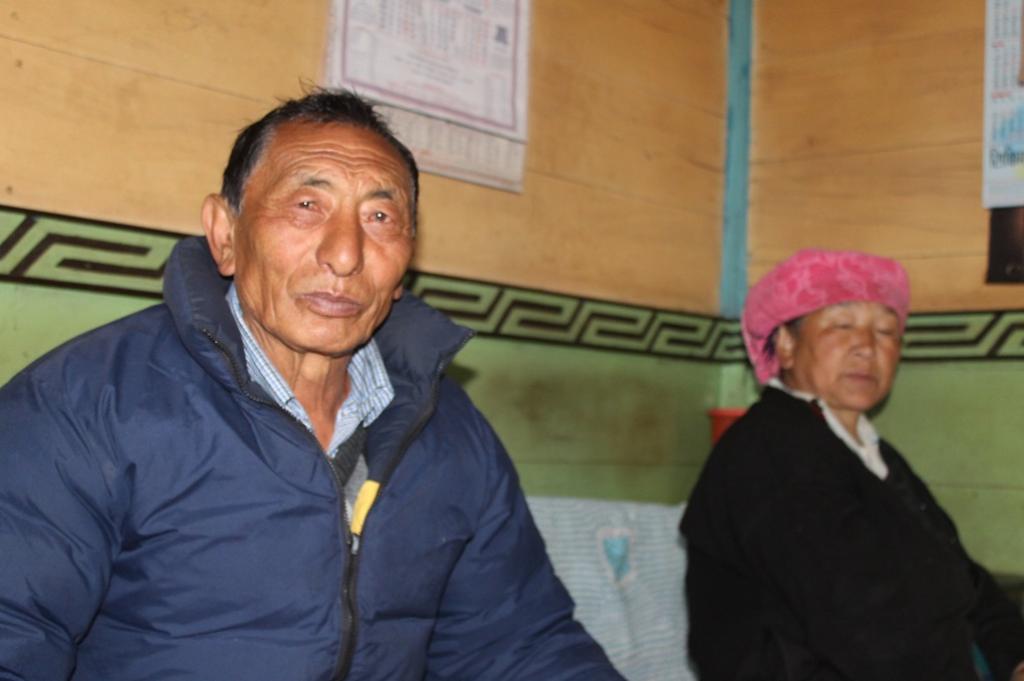 The people of Lachen–Lachung have plenty of vegetables for their own consumption. They sell the surplus – organically grown potatoes and cabbages – to neighbouring villages.

Women do most of the work in Lachung. In the farms, they do the sowing, pruning, applying manure, watering and harvesting. They work in their own hotels, some manage the reception desks. The greenhouse is a new technology for the area, for chilis and tomatoes that cannot be grown in the cold climate. 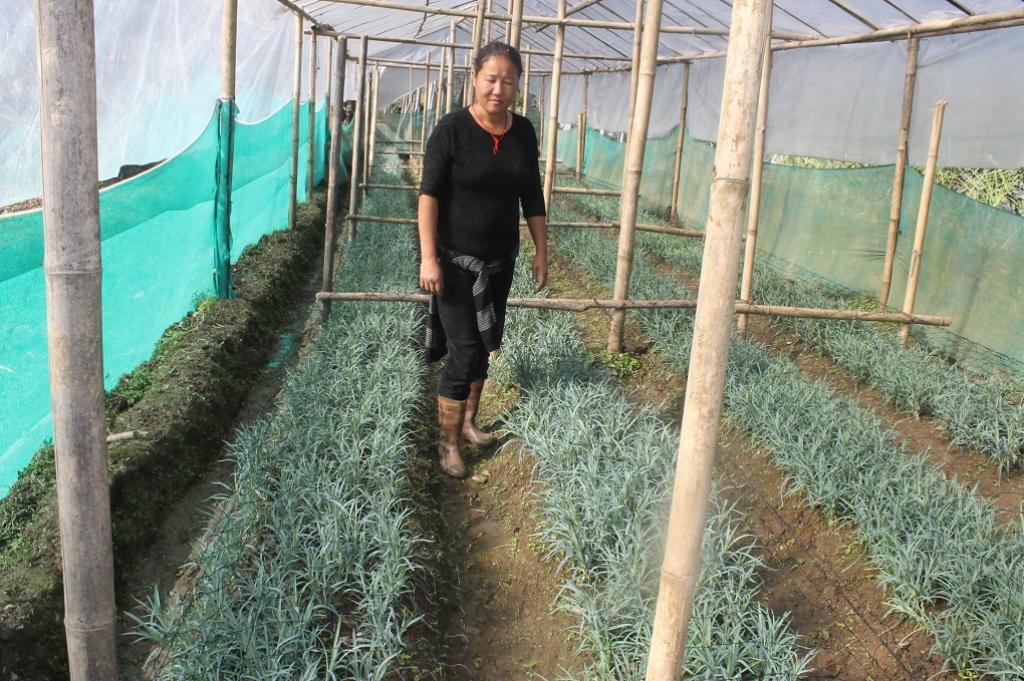 Tshering Lhamu, in her seventies, living in her one roomed house, half of which is used for selling biscuits and other snacks, finds time to relax a bit during winter after sowing potatoes. She has just come back from a pilgrimage to Bodh Gaya. She sat counting beads in a corner of her room, with the door left wide open for anyone to drop in and buy what is available in her small shop. She has invested her income from selling potatoes in the shop and managed to employ a tribal girl from Bengal, a rare event in Lachung.

Kunga Chuden Lachungpa has a small space attached to her house where she grows beans during winter. She has preserved maize for consumption until July. Most of it will be used as ‘makai chewra’, beaten corn. Her daughter-in-law joins her in making makai chewra. Two sets of traditional pestle and mortar are used.

The move away from apples to vegetables has worsened the financial security of people in this area. Hissey, a well-educated farmer, said, “The snowfall was late this time, but the rains have started early. Rhododendron and Primula flowers normally bloom in February-March, this season those were seen blooming early.” The family has farms on which they grow cabbage and potatoes. He said the potato produce was 70% less in 2017 than in the preceding year.

The farmers of Lachung-Lachen are apprehensive of the adverse impacts of climate change, with the fear of floods and landslides, as well as the poor yield of their crops, “Snowfall has been less and rainfall was also less than in 2016. Now the snow is only ankle deep. It used to be knee deep,” said a resident who wanted to remain anonymous. For her the explanation is not global warming or climate change but black magic. “A Dhwaja (prayer flag) has been fixed by someone to stop the rain. We are getting rain and a bit of snow only due to our puja (prayers),” she said.

This is the fifth in a special series of reports by women journalists, done in partnership with ICIMOD, showing how vulnerable communities innovate and adapt in the face of climate change.

The Hindu Kush Himalaya (HKH) region is one of the world’s youngest, highest and most fragile mountain systems. It is one of the areas most vulnerable to climate change, where temperatures are rising much faster than the global average. It is also an area of huge cultural diversity – where some of the poorest communities face huge challenges.

The Himalayan Adaptation, Water and Resilience Research (HI-AWARE) is a research consortium that has carried out scientific and participatory research to better understand the impacts of a changing climate in the region. As part of this project, HI-AWARE reached out to women journalists across the region to capture local experiences – from high in the icy mountains to the sandy plains. The stories that emerged are now being published on thethirdpole.net as part of a special series to be published over the next few months.

From farming silt on the banks of the Gandaki, to harvesting water through artificial glaciers in the mountains, these stories capture the innovative adaptation strategies people are using and that can serve as lessons for communities elsewhere.