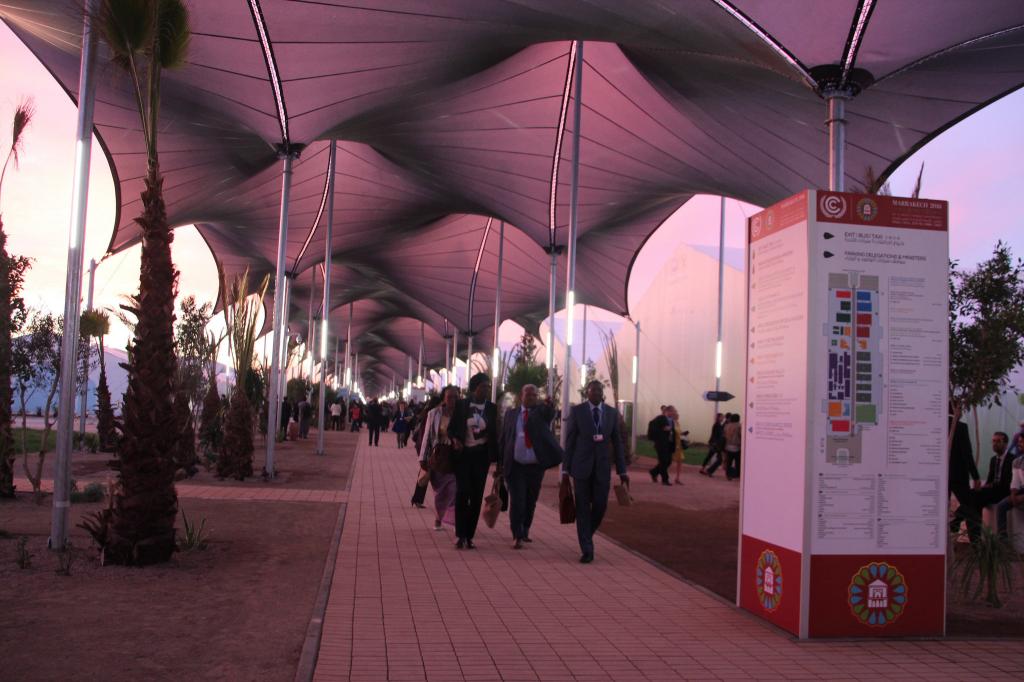 Speaking at its side event in Marrakech, Chandra Bhushan, deputy director general of the Delhi-based Centre for Science and Environment, presented the case of a farmer from Agra who suffered huge potato crop losses due to unseasonal rain and hailstorm. He spoke about the importance of agricultural insurance mechanism in supporting such farmers and helping to increase their resilience. In fact, data also shows that at present less than two per cent people in developing countries have some kind of climate risk insurance.

Referring to the alarming increase in extreme weather events, Bhushan said that “freak events have become a norm” with number of extreme weather events rising to average 350 in the decade of 2000-2010 as against the average of 2.5 in the decade of 1900-1910. Further, citing an FAO report, he pointed out that the number of poor can increase by between 35-122 million by 2030.

In his presentation, he harped on the need to address vulnerability and highlighted that “there are limits to adaptation”. Unaffordability of the farmers to buy such insurance is one of the main barriers to agricultural insurance. In the US and Canada, 73 per cent of the agricultural insurance premiums are borne by their governments. In India, US$13 billion is required for agriculture annually of which US$1O billon must be subsidy.

According to Bhushan, the Warsaw International Mechanism (WIM) was the right platform for creation of globally supported agricultural insurance mechanism and it was a welcome step that countries at Marrakech have agreed to discuss channels of funding to address loss and damage.

He mentioned that there was a momentum for risk insurance by developed and developing countries opting for pilot projects or full-scale agricultural insurance programmes depending upon the circumstances. He also argued that global agricultural mechanism must be government-led with no profit motive. While equity and climate justice must be its core principles, the funding for such a mechanism should be assessed as per responsibility and capability. The importance of sustainable agricultural practices was also talked about. However, he cautioned that insurance is the last response and efforts must also be made to reduce risks.

Gottfried von Gemmingen of InsuResilience Initiative—which aims at covering 400 million people in developing countries by 2020—was sceptical about globally supported agricultural insurance mechanism as there were lot of questions regarding delivery mechanisms and funding issues. Instead, he endorsed aligning with sovereign risk pooling plans and schemes and then scaling down to micro-insurance. The emphasis was on development micro-insurance products. He agreed that sustainable agricultural practices were a pre-requisite to successful agricultural insurance. He, too, upheld that insurance was one of the many options for managing risks.

Teresia Powell from Fiji spoke about the loss and damage and coping of communities in Fiji. She underlined how the island country was heavily exposed to climate impacts and communities have been re-located to cope with climate impacts, which she described as successful governmental initiative. She acknowledged the decision to treat loss and damage in a separate Article 8 of the Paris Agreement and hoped that Warsaw International Mechanism could take up the work of loss and damage in a meaningful manner. According to her, an integrated approach is required with community leadership and government assistance. In her presentation, she also highlighted that financial resources were the biggest barrier to help communities and endorsed Bhushan’s view that agricultural insurance could be the right step forward.

Sabine Minninger, representing Act Alliance, supported the idea of global agricultural insurance mechanism which can be one useful financial instrument to address loss and damage. She emphasised the importance of subsidised premium related to agricultural insurance. She welcomed the discussions of adaptation and loss and damage under the UNFCCC but highlighted that adaptation finance is only 20 per cent of the total finance. Besides pointing out that there was no money for loss and damage, she stressed on the role of humanitarian organisations in ensuring that no one is left out.