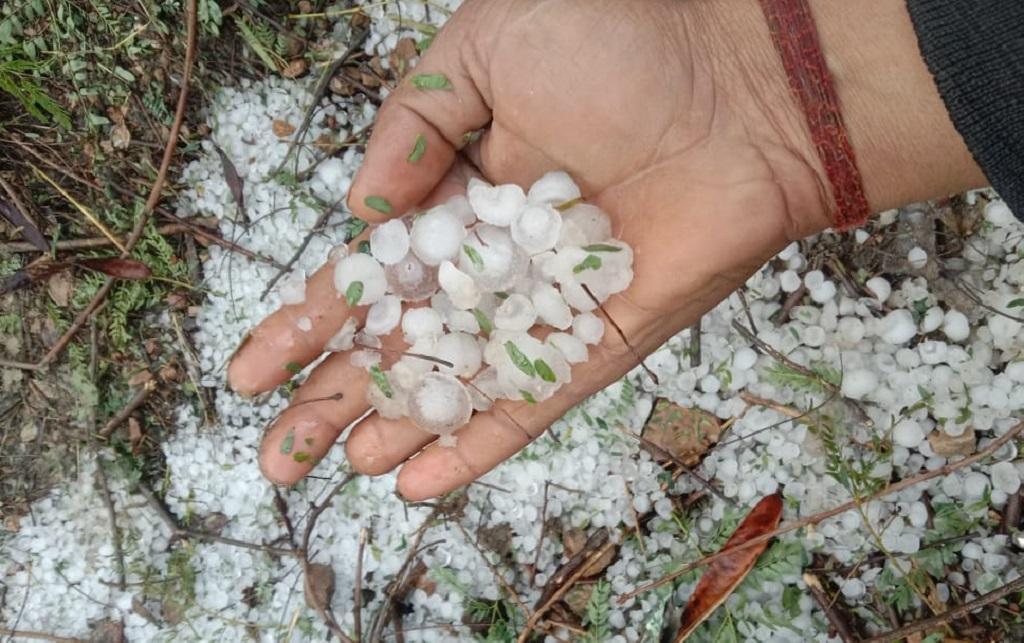 Farmers in Madhya Pradesh’s smallest district of Niwari, home to the tourist town Orchha, are ruing the complete loss of their standing rabi crop due to a hailstorm January 9, 2022.

The powerful storm hit several villages of the district at 8 am January 9 and continued for 30 minutes. Wheat, peas, mustard, sorghum and other crops in at least a dozen villages in the district have been completely destroyed, according to sources.

“The weather had been bad since 2-3 days. The hailstones weighed 10-50 grams. They did not melt even by the evening. I have never witnessed such a hailstorm ever before,” Sanjeev Prajapati, a farmer from Kalothra village in the district told this reporter.

Anil Jain, the member of the state legislative assembly elected from Niwari, visited the affected areas along with district collector Narendra Kumar Suryavanshi and other officials.

Niwari is not alone. It has rained in all but nine of Madhya Pradesh’s 52 districts since Christmas Day. Farmers welcomed the rain at first as being beneficial to the rabi crop. But now, rain and hail have wrought havoc in a number of districts.

Far away from Niwari, the district of Harda in the Narmada valley too has suffered damage. The village of Paanlatai is the most affected.

Nisha Ramkuche, who works with the village Panchayat said the chickpea and wheat crop were flowering when a hailstorm struck the village. They have now been damaged.

Reports of damage have also come in from Vidisha and Chhatarpur districts.

Irfan Jafri, the head of the Kisan Jagriti Sangathan (Farmers’ Awakening Association) non-profit, said he had received reports of damage.

“The government should immediately conduct a survey and order insurance companies to compensate farmers. However, these firms have been making various excuses and not paying compensation to farmers in recent years,” Jafri said.

The ongoing cold wave in the state is due to western disturbances, according to PK Saha from the Bhopal Meteorological Department. The wave will continue till January 12, after which the weather is expected to improve, he said.

Madhya Pradesh Agriculture Minister Kamal Patel said officials from the revenue and agriculture department were surveying the affected villages. He said 25 per cent of the compensation money will be paid immediately to farmers.