Heatwave: think it's hot in Europe? The human body is already close to thermal limits elsewhere

The challenges ahead are stark. Adaptation has its limits. We must therefore slash greenhouse gas emissions to keep to the Paris warming limits 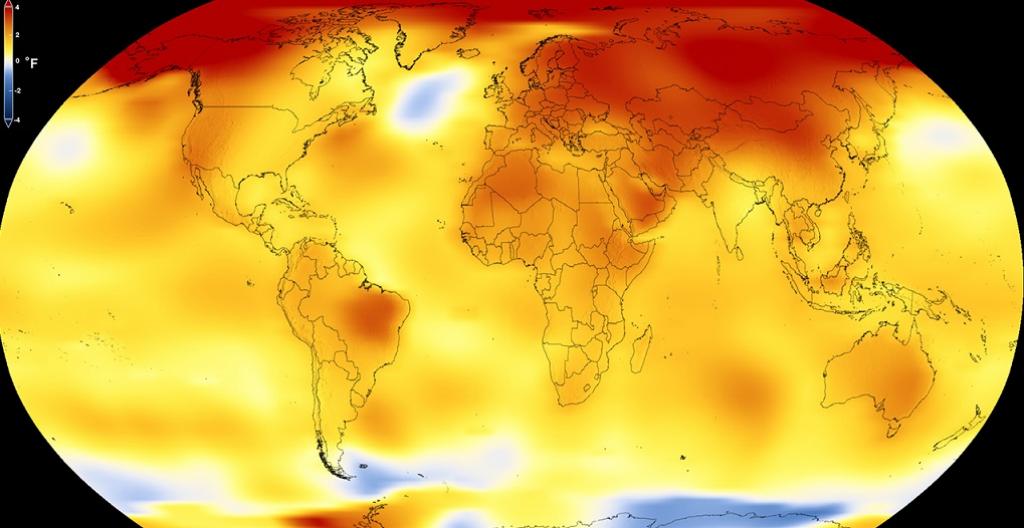 Average global temperature from 2013 to 2017, as compared to 1951–1980 baseline. NASA’s Scientific Visualization Studio

I am a scientist who researches climate hazards. This week I have published research on the potential for a catastrophic cyclone-heatwave combo in the global south. Yet over the past few days I have been approached by various media outlets to talk not about that hazard, but about the unfolding UK heatwave and climate change. It is always satisfying to respond to public interest around weather extremes, but there is a danger that key messages about extreme heat globally are not receiving enough airtime.

It is by now very well established that hot extremes are more likely in the changed climate we are living in. Yet there is a seemingly unquenchable thirst for this story to be retold every time the UK sweats. Narratives around such acute, local events detract from critical messages about the global challenges from extreme heat.

Make no mistake, maximum temperatures of 35°C or more are hot by UK standards, but such conditions are familiar to around 80 per cent of the world’s population. The headline-grabbing 46°C recently experienced by Britain’s neighbours in France is indeed unusual, but still falls short of the 50°C recorded in India earlier this summer, and is somewhat temperate relative to the 54°C confirmed for both Pakistan (in 2017) and Kuwait (in 2016). People in these hotter climates are better at coping with high temperatures, yet such heat still kills.

Deadly heatwaves are, of course, no stranger to Europeans. The infamous 2003 event claimed as many as 70,000 lives, and 2010 saw more than 50,000 fatalities in western Russia. Fortunately, lessons were learned and authorities are now much better prepared when heat-health alerts are issued.

But spare a thought for less fortunate communities who are routinely experiencing extraordinary temperatures. In places like South Asia and the Persian Gulf, the human body, despite all its remarkable thermal efficiencies, is often operating close to its limits.

And yes, there is a limit.

When the air temperature exceeds 35°C, the body relies on the evaporation of water – mainly through sweating – to keep core temperature at a safe level. This system works until the “wetbulb” temperature reaches 35°C. The wetbulb temperature includes the cooling effect of water evaporating from the thermometer, and so is normally much lower than the normal (“drybulb”) temperature reported in weather forecasts.

Once this wetbulb temperature threshold is crossed, the air is so full of water vapour that sweat no longer evaporates. Without the means to dissipate heat, our core temperature rises, irrespective of how much water we drink, how much shade we seek, or how much rest we take. Without respite, death follows – soonest for the very young, elderly or those with pre-existing medical conditions.

Wetbulb temperatures of 35°C have not yet been widely reported, but there is some evidence that they are starting to occur in Southwest Asia. Climate change then offers the prospect that some of the most densely populated regions on Earth could pass this threshold by the end of the century, with the Persian Gulf, South Asia, and most recently the North China Plain on the front line. These regions are, together, home to billions of people.

As the climate warms in places like the UK, people can take sensible precautions against heat – slowing down, drinking more water, and seeking cool refuges. Air conditioning is one of the last lines of defence but comes with its own problems such as very high energy demands. By 2050, cooling systems are expected to increase electricity demand by an amount equivalent to the present capacity of the US, EU, and Japan combined.

Provided that electricity supplies can be maintained, living in chronically heat-stressed climates of the future may be viable. But with such dependence on this life-support system, a sustained power outage could be catastrophic.

So what would happen if we combined massive blackouts with extreme heat? Two colleagues and I recently investigated the possibility of such a “grey swan” event – foreseeable but not yet fully experienced – in a global study of storms and heat, published in the journal Nature Climate Change.

We looked at tropical cyclones, which have already caused the biggest blackouts on Earth, with the months-long power failure in Puerto Rico after Hurricane Maria among the most serious. We found that as the climate warms it becomes ever more likely that these powerful cyclones would be followed by dangerous heat, and that such compound hazards would be expected every year if global warming reaches 4°C. During the emergency response to a tropical cyclone, keeping people cool would have to be as much a priority as providing clean drinking water.

The UK is moving into new territory when it comes to managing extreme heat. But the places that are already heat stressed will see the largest absolute increases in humid-heat with the smallest safety margin before reaching physical limits, and they are often least-equipped to adapt to the hazard. It is therefore hardly surprising that extreme heat drives migration. Such mass displacement makes extreme heat a worldwide issue. Little Britain will feel the consequence of conditions far away from its temperate shores.

The challenges ahead are stark. Adaptation has its limits. We must therefore maintain our global perspective on heat and pursue a global response, slashing greenhouse gas emissions to keep to the Paris warming limits. In this way, we have the greatest chance of averting deadly heat – home and abroad.

Tom Matthews is a lecturer in climate science at Loughborough University.