The sea levels in areas could be rising (or falling) due to the land’s movement relative to the sea; the Earth’s surface mass in August 2020 deviated from the average for all months between 2004 and 2009; there were spatial variations in the rate of sea-level rise between 1993 and 2018. 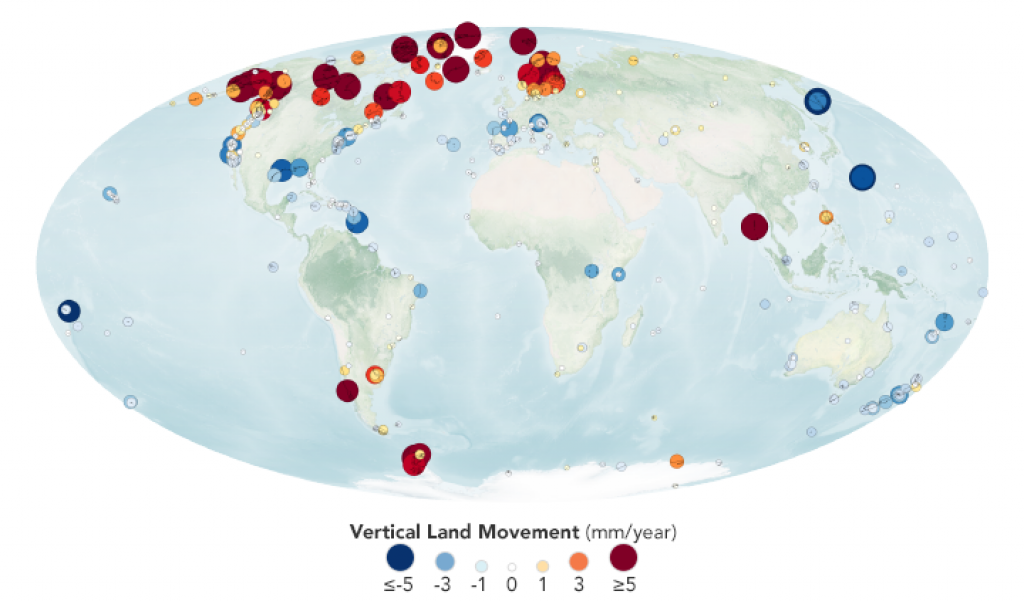 Scientists at NASA used multiple tools to piece together where and why the uplift and subsidence happen — both natural and human-driven processes were important, they found.

Natural drivers such as the shifting of Earth’s tectonic plates and compression of buried ocean sediments produced gradual motion that spread over broad areas.

Human-driven processes such as oil production, groundwater extraction and draining and drying of peat soils also cause land motion, but most changes were localised, scientists found.

In the map above, 328 Global Navigation Satellite Systems (GNSS), co-located with tide gauges (to measure the height of the sea), helped analyse the land movement. It also helped understand whether waters were rising in a given area or the land was sinking.

According to NASA, groundwater extraction and oil production can produce rates of subsidence in centimeters per year, compared to the millimeters per year in the case of natural processes. 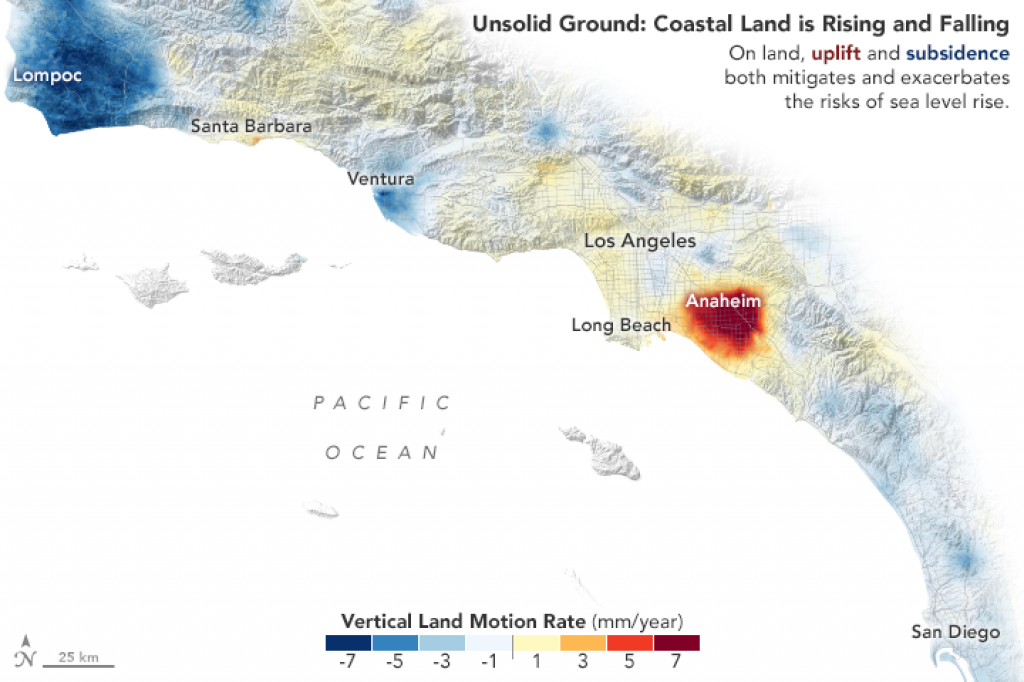 The map of southern California (above), for instance, shows a zone of strong uplift around Santa Ana, a valley just south of Los Angeles, where groundwater management systems have replenished underground aquifers in recent years.

Other parts of coastal California were subsiding due to sediment compaction, oil extraction and tectonics, according to NASA. 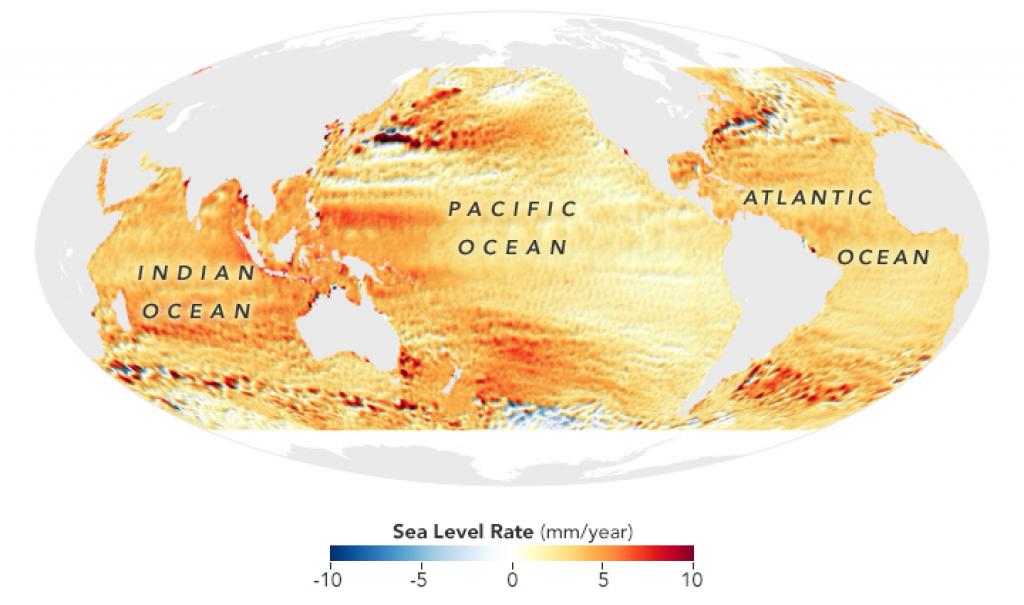 The map shows global trends in sea level around the world as observed from 1993 to 2018 by four altimetry missions.

Altimetry missions are used to know the ocean surface topography — the shape and height of the ocean’s peaks and valleys.

Radar altimeters continually send out pulses of radio waves (microwaves) that bounce off the surface of the ocean and reflect back toward the satellite. The instrument calculates the time it takes for the signal to return, while also tracking the precise location of the satellite in space. From this, scientists can derive the height of the sea surface directly underneath the satellite.

There are spatial variations in the rate of sea level rise, with some parts of the ocean rising faster (depicted in red and deep orange) than the global rate. 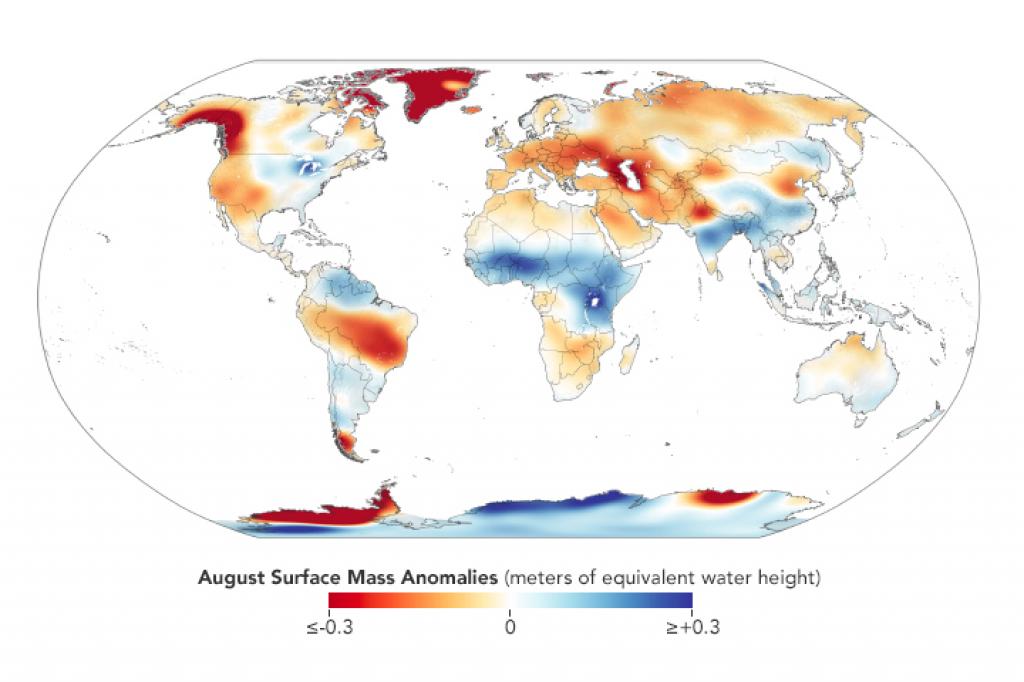 The Earth’s surface mass in August 2020 deviated from the average for all months between 2004 and 2009. Shades of red and orange indicate where Earth’s mass declined, mostly due to changes in the amount of water, including snow and ice.

Blue areas show where mass grew. Some major changes were focused in the ice-rich areas of West Antarctica, Greenland and southeast Alaska.

Gravimetry is a process of using ice’s gravitational pull on a pair of satellites. It helps estimate ice loss and its contribution to sea-level rise.

The main tools for this measurement have been the Gravity Recovery and Climate Experiment Follow On (GRACE-FO) satellites as well as and GRACE, a predecessor mission between NASA and the German Aerospace Center (DLR) from 2002 to 2017.

(GRACE-FO) is a joint mission launched in 2018 by NASA and the German Research Center for Geosciences (GFZ).

Such increases or decreases can be caused by changes in groundwater storage or by the decay of ice sheets and glaciers.

The GRACE mission from 2002 to 2016 found the mass losses across the Greenland Ice Sheet. It showed that during the span, the ice sheet shed about 280 gigatonnes of ice per year, causing global sea level to rise by 11.2 millimeters (0.4 inches) per year.

Melting ice in Antarctica also contributed to sea-level rise. Between 2002 and 2017, mass losses from the Greenland and Antarctic ice sheets combined to contribute about 1.2 millimeters per year to global mean sea level. That’s about a third of the total rise in sea level over that time. 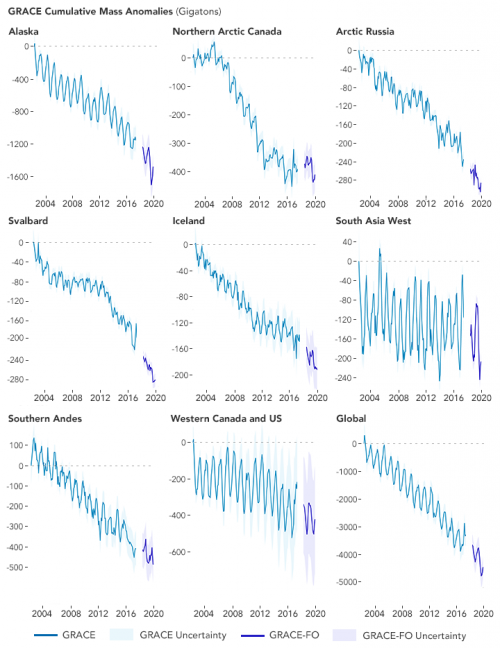 The figures above, derived from GRACE, show the largest mass losses occurred in Alaska. Other areas such as western Canada and the United States saw changes that were relatively small until 2012, followed by a period of larger losses.

NASA scientists have projected that ice losses from the Greenland and Antarctic Ice Sheets will play a large part in sea-level rise in the upcoming century.

One key measurement to assess the health of glaciers is ice height, which scientists use to calculate mass changes over time.

Mass losses in Greenland exceeded those in Antarctica during between 2003 and 2018. Researchers found that Greenland lost an average of 200 gigatonnes of ice per year, much of it from coastal glaciers. 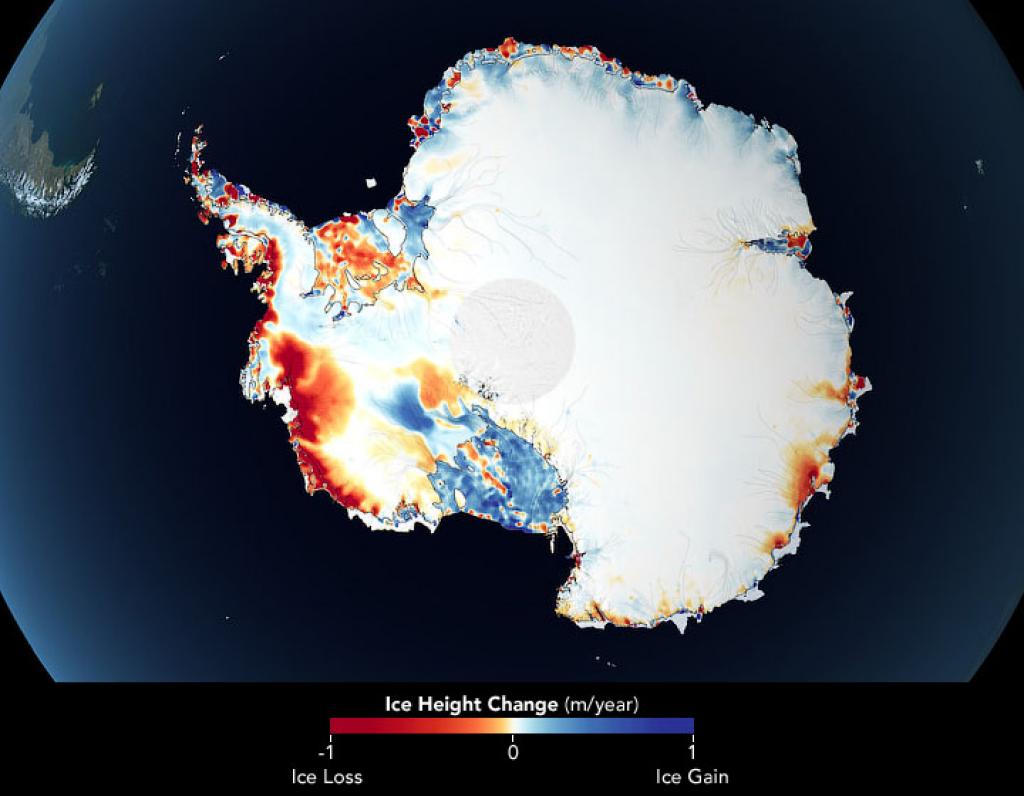 Analysing various datasets, the scientists found that the main driver of loss in Greenland was surface melting due to ever-warmer summer temperatures. Warmer ocean water also eroded the glaciers at their fronts in some basins.