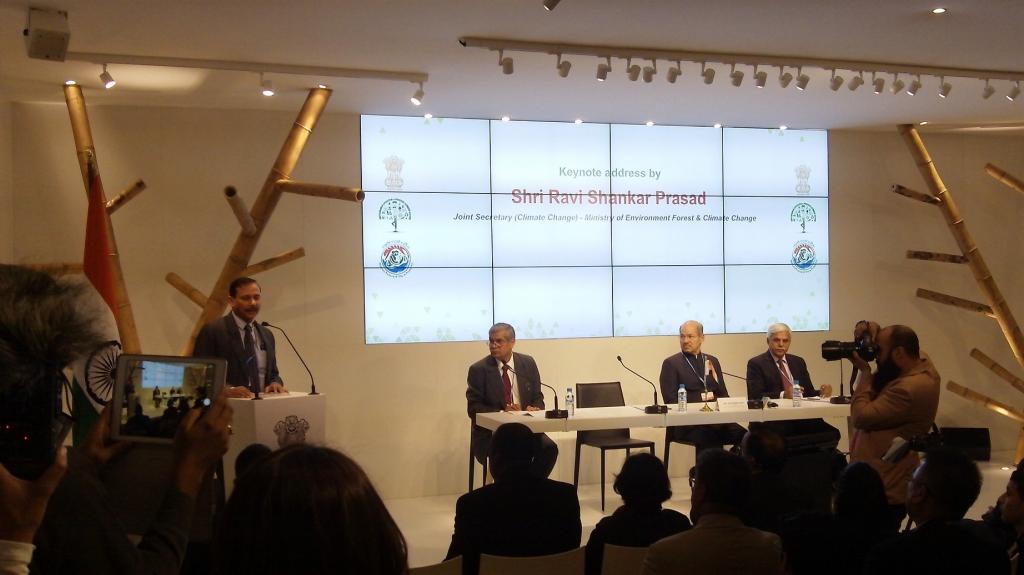 The India Pavilion was set up to stage events hosted by the Indian government and other Indian participants. Credit: Shreeshan Venkatesh/ DTE

The India pavilion at the COP22 was inaugurated today (November 8) at the Bab Ighli village, the venue of the summit. The Pavilion was inaugurated by the Minister of State for Environment Anil Madhav Dave in the presence of additional secretary R R Rashmi, director of Climate Change Division S Satpathy and joint secretary for climate change Ravi Shankar Prasad.

With moving LED displays, several synchronised large screens displays, water curtains and a revolving globe as the centerpiece, The India Pavilion is the biggest ever set up by the government at any COP event so far. The pavilion has been set up as the staging area for activities and events undertaken by the Indian government and other Indian participants at the summits. It is an attempt at building a technology-intensive interactive stage for information on India’s climate initiative. Despite the extravagant set up, the pavilion was inaugurated under the theme of “Sustainable Living”.

The environment minister upheld the Indian view of environmental conservatism and the sustainability of the Indian lifestyle as an extension of Gandhian philosophy and more broadly as an inherent part of the Indian way of life. He further underlined the need to spread climate change awareness and the importance of collective action. The minister further highlighted the responsibility of youth in tackling climate change. “Climate action needs to happen beyond the walls of this five star conference set up. What happens here is fine but what matters is how much we can incorporate suitable practices on the ground, in our daily lives. Climate change must be a topic among the common people, not just among the privileged and the highly educated. I hope the youth take charge in this endeavour. In future, the Indian Pavilions should not only be bigger but full of youngsters who can take the Indian agenda for climate awareness and action forward.”

The minister also, somewhat obtusely, referred to an Indian fable and stressed the need to tweak and ease out any inadequacies instead of doing away with the process altogether.

The minister made a fleeting mention of Delhi’s air pollution woes in recent weeks to illustrate his involvement at all levels in India’s fight against climate change. He further solicited Indian scientists from premier research and scientific institutes to engage more deeply in the process of climate negotiations. "I call on scientists and policy influencers to get more involved in this process and I assure you that all obstacles in the path to this will be cleared by me."