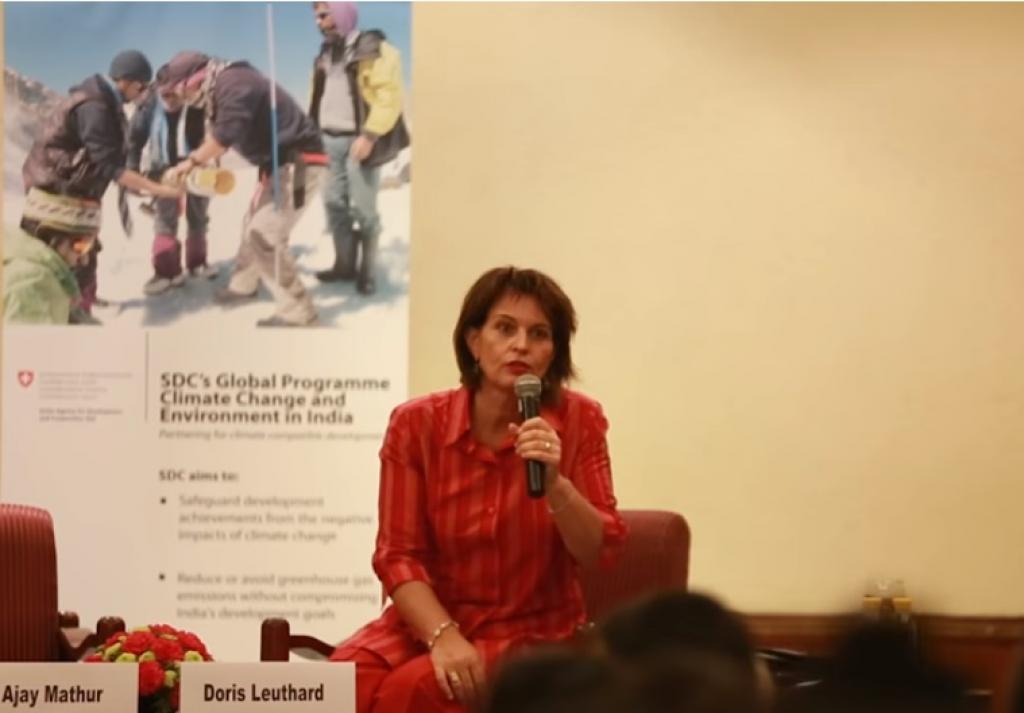 "By the end of this century, we would need 2.8 planets to survive if we are not able to change people’s mindset, industrial processes and our behaviour,” said the President of Switzerland, Doris Leuthard, during her address at a town hall organised by The Energy and Resources Institute (TERI) at the India Habitat Centre on September 1, 2017. She was perhaps alluding to the goal of restricting global temperature rise to well below 2.8°F (1.5°C) by the end of this century.

Taking the audience through the history of Switzerland’s energy policy, Leuthard highlighted how the country phased out coal as early as the 60s and switched to nuclear plants. But the accident at the Lucens reactor in 1969 was a rude awakening for the people who started talking about the safety concerns of nuclear power plants. ”We realised that the risk was not very attractive,” she added.

For a country, whose one-third of power supply comes from nuclear power plants, it was a bold move that Switzerland took this May when its people voted for phasing out nuclear energy and switching to renewables. That would mean large investments in subsidies for renewable energy, no new construction of nuclear plants and decommissioning of the country’s five existing ones. The first one has been earmarked for closure in 2019.

“We are heavily dependent on fossil fuel import and that’s why this transition is essential for us to become less dependent. Energy efficiency is the main pillar of our strategy and we are trying to find out how to reduce energy consumption through energy-efficient mobility and housing,” the Swiss President added. Switzerland levies carbon tax, especially for those who use gas and oil for heating purpose. This money is used for refurbishing homes and making them more energy-efficient.

Speaking about the challenges that her country is facing in terms of access to clean energy that’s adequate and affordable, Leuthard said, “We have to soon find out ways to store energy. Sunshine is not abundant in Switzerland. So, whatever power is generated during the summer months—when there is wind and sun—should be stored for the use in winter, when the energy demand peaks.” According to her, it's a major opportunity for start-ups to explore.

Urging young researchers and experts from different faculties to collaborate on innovating new technologies to make energy affordable and accessible, she mentioned how the Swiss government is encouraging experiments and research in this domain. “We have seven competence centres to make the move towards more carbon-less economy”. A certain amount has been earmarked for these competence centres as a part of the action plan to promote research into energy.

“India can also replicate this strategy. You have to get politicians’ mandate on encouraging close collaboration between research institute and policymakers, and investing in research even though there’s a risk of the final outcome not turning out to be worth commercialising,” she said.

In the recent years, Switzerland has been feeling the heat of changing climate. “We have melting glaciers and our average temperature rise is 3.5 degrees, which is much higher than global average. But we talk about climate change only when disasters strike,” said Leuthard. In the last week of August this year, a large chunk of rock broke off an Alpine mountainside, triggering mudslides in a village in south-eastern part of the country. Climate scientists have attributed this event to "weakening of the permafrost" in many Alpine peaks due to climate change.

Building on Swiss President’s observations, Ajay Mathur, director general of TERI, said that the challenges and objectives of India and Switzerland are not very different. “We want adequate and affordable energy that is not based on carbon. The upcoming innovators have to take up the challenge of coming up with a solution to this,” he remarked. Expressing hope at the prospect of clean energy transition, he pointed out how the solar power tariff has fallen to a record low, making it even cheaper than coal.

In her concluding remarks, the Swiss President explained why it is important to maintain a database for managing climate change risks. She also had a word of advice for India: “Please don't repeat the mistake that we did as industrialised world.”