A group of 88 investors have written to corporate giants such as Bharti Airtel, Reliance Industries and 20 others to disclose their impact on climate crisis, water shortages and deforestation

An alliance of global investors with a combined asset of over $10 trillion have accused 22 Indian companies, which include Bharti Airtel, ITC and Coal India, of not revealing the full extent of their impact on climate crisis, water shortages and deforestation.

CDP, an environmental disclosure campaign platform, on behalf of 88 investors has written to 707 multinationals, including 22 Indian companies, spread across 13 sectors in 46 countries to disclose environmental impact information.

The non-profit claims many of the companies in the list do not use standardised environment data in their sustainability reports which prohibits any form of comparison.

The companies need to respond by July 31 by filling up an open questionnaire developed by CDP.

“Indian companies need to be more cognisant of the growing environmental disclosure norms of global investors in order to attract capital. However, there are a group of 22 high-impact companies that have not yet stepped forward,” said Damandeep Singh, director of CDP India.

“We are engaging them along with the BSE Top 200 and hope they become partners in addressing the climate emergency that is engulfing us,” he added.

The companies are being asked to disclose information on: 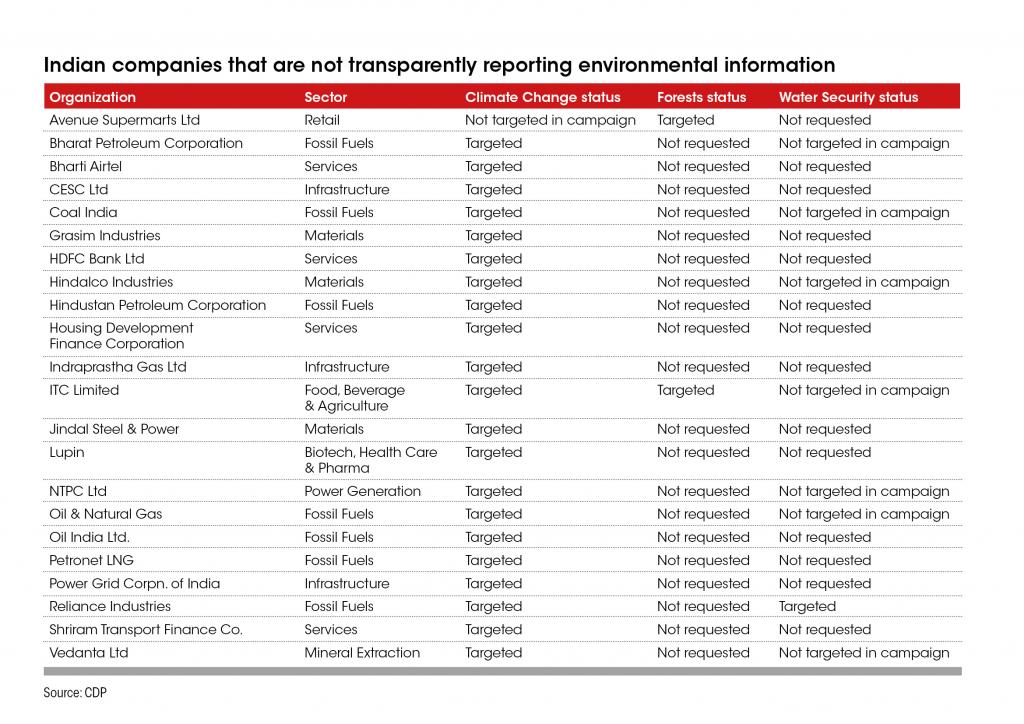 “Companies must disclose their role in addressing the climate crisis we face. We know that climate change, water security and deforestation present material risks to investments, but these risks cannot be managed without proper information,” said Emily Kreps, global director of Investor Initiatives at CDP.

She added that the action taken demonstrates that investors care about climate change.

The most targeted industry for climate change disclosure this year is the services industry (27 per cent of all companies), followed by manufacturing (18 per cent) and fossil fuels (12 per cent).

Overall, the US is home to most companies being targeted in the campaign (20 per cent) closely followed by Australia (16 per cent). Three per cent of the companies are in India.