Cracks in a paddy field in Odisha due to lack of rainfall. Photo: Ashis Senapati

A total 24 of Odisha’s 30 districts are facing a drought-like situation due to the lack of rains this monsoon. This is according to the rainfall report from June 1-August 25, 2021 by the office of the Special Relief Commissioner, Odisha.

Only six districts — Cuttack, Nayagarh, Ganjam, Koraput, Malkangiri and Khordha — have witnessed normal rains according to the report.

The monsoon has been inactive this month in the state.  Rainfall has been deficient by:

However, HR Biswas, director, India Meteorological Department’s Regional Meteorological Centre in Bhubaneswar, stated that out of 30 districts, only three districts — Koraput, Nuapada and Malkangiri — received normal rains in this monsoon. 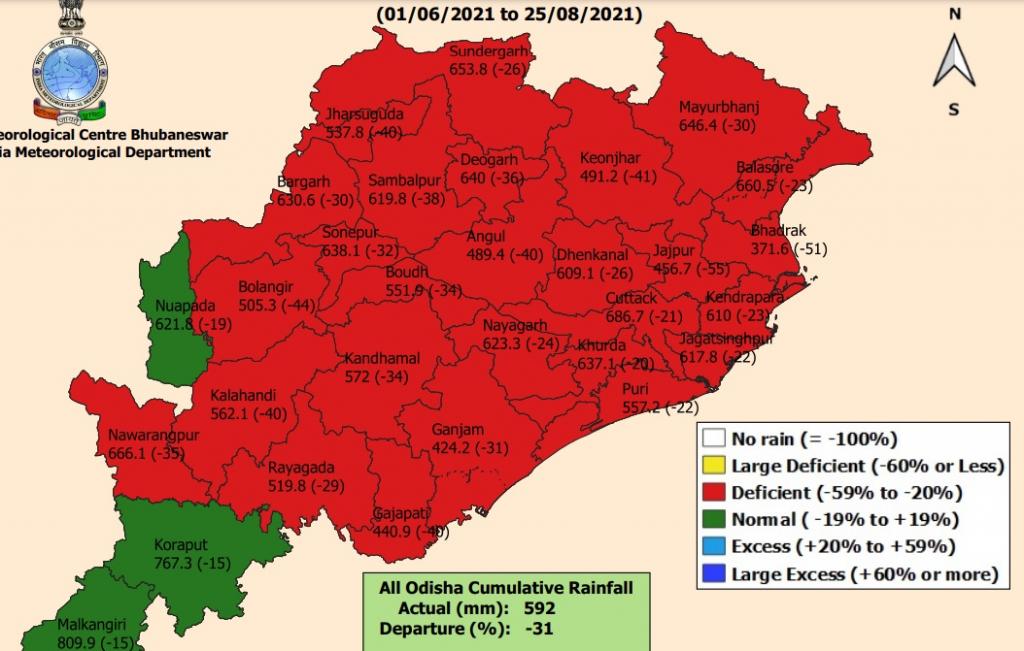 Odisha’s Chief Secretary, Suresh Chandra Mohapatra, has stated that the state received 50 per cent less rain in August. Mohapatra recently directed all collectors to come up with measures to tide over the drought-like situation prevailing in the districts.

Deficient rainfall this monsoon has become a major cause of worry for Odisha’s farmers. The standing crops of paddy have started drying up due to a lack of water. Farmers will suffer huge losses if the monsoon remains elusive in the coming days as well.

“The deficient rainfall has made it difficult for farmers to take up sowing operations for paddy, especially in the non- irrigated parts of the state,” Umesh Chandra Singh, a farmer leader and the vice-president of the Odisha Krushak Sabha or Odisha Farmers Assembly told this reporter.

He added that rainwater should remain stagnant in the fields as this helped in paddy cultivation. Rainfall was deficient in June; it has been lesser still in July and August. As a result, a large number of farmers were in deep trouble.

Many farmers were trying their best to save their paddy saplings from damage by lifting water from the ground or nearby water bodies through motor-pumps.

“In our village, some rich farmers have irrigated their fields with the help of deep pump machines. But poor farmers like me cannot afford to do this. As a result, paddy saplings over large tracts have wilted and cracks have developed in many fields,” Manas Rout, a farmer of Sukinda in Jajpur district, said.

Akshay Kumar, a farmer leader and the convener of Nava Nirman Krushak Sangathan, said farmers in Odisha were seething with anger as promises made by their elected representatives to irrigate land were proving hollow.

He added that excess rain and floods in May due to cyclone Yaas had damaged summer paddy crops and vegetables, while less rain from June to August was now dealing a second blow to farmers.