Monsoon watch: The 2019 season has the sure-shot imprint of climate change

The monsoon has played truant this year, with many areas now under floods, which were facing drought earlier

The 2019 Southwest Monsoon season has so far played truant. It has resulted in floods in many places which were previously suffering from drought. Photo: Getty Images

If there is any more evidence that deniers need about the existence of climate change, they should look at the 2019 southwest monsoon season.

The monsoon has played truant this entire season. It began with a week’s delay after which it had a sluggish start with a decreased intensity up until the first week of July.

The delay was caused either by the extended presence of westerly winds, especially western disturbances, in the northern parts of the country or by the presence of weak El Niño conditions in the equatorial Pacific Ocean.

It has a strong correlation with the southwest monsoon season in India but no direct cause and effect. According to DS Pai of the India Meteorological Department (IMD), El Niño could have had a role to play in this delay. But sometimes, the monsoon has arrived early even during El Niño years so nothing can be said for sure. 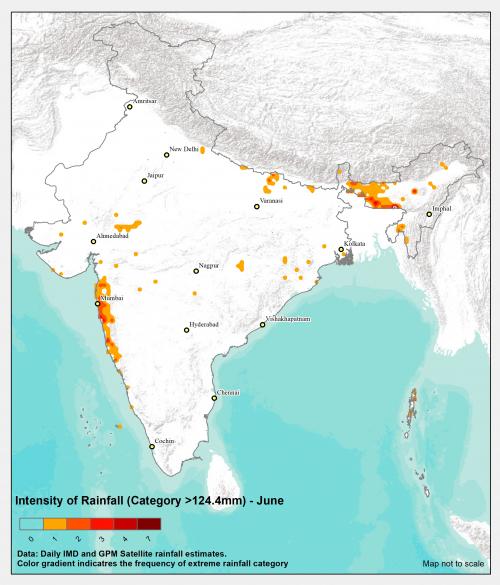 The progress of the monsoon in June, 2019. The legend values are between 0 to 7. The frequency of value says 7, which means it has repeated 7 times with rainfall category >124.4mm which is noticed in parts of Mumbai and Meghalaya including Cherrapunji. Photo: Giriraj Amarnath/International Water Management Institute, Colombo

By June 18, the monsoon winds had not moved past Kerala and Karnataka. The slow progress of the monsoon winds was brought about by the development, propagation and dissipation of very severe Cyclone Vayu in the Arabian Sea over nine days from June 9 to June 17.

The winds of the cyclone disrupted the regular trade winds in the region, which are the carriers of monsoon. This kept the monsoon arrested in Kerala, Tamil Nadu and Karnataka till June 21.

Only when these winds blow at a normal speed, can the monsoon progress into the Indian Subcontinent. Due to this, the country-wide deficit in rainfall until June 18 stood at 44 per cent.

The formation of a cyclone during the monsoon season usually indicates warmer-than-usual sea surface temperatures which means that the temperature difference between land and sea was reduced. This could also cause the monsoon winds which specifically depend upon this difference to not move forward.

The scanty rain scenario changed in the last week of June when some regions had started receiving intermittent rainfall. Due to this, the rain deficit figure dropped to 33 per cent by June-end and 28 per cent by July 3.

The first heavy spell of rains began around July 7. Up until then, rainfall deficiency was 40 per cent or more in 266 districts. For nearly half of them, the deficiency was greater than 60 per cent; in 46 districts it exceeded 80 per cent.

Many of the high-deficit districts were in north India, where the monsoon arrived recently, but the situation was dire even in the south and the east, where the winds have been there for a while.

Kerala and Tamil Nadu, where the monsoon arrived by June 8, were reeling under large deficits of 45 and 48 per cent respectively. After this extended period of lull, the rains suddenly changed character and heavy rains with isolated incidents of extremely heavy rainfall were recorded in the eastern and north eastern parts of the country. 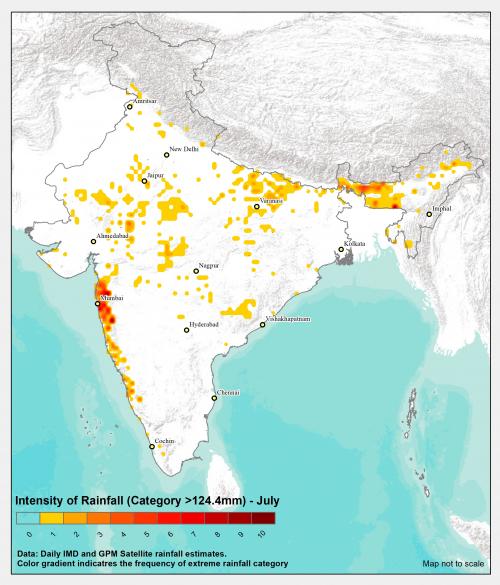 In July the message is same, but there was more frequency of rainfall category >124.4mm across the Western Ghats and Northeast India. Photo: Giriraj Amarnath/IWMI, Colombo

These spells were intense and crowded over a few days which precipitated floods in many regions across the country killing hundreds of people, displacing millions and impacting their livelihoods.

The first states to face the wrath of rain were Bihar and Assam. In Bihar alone, more than a hundred lives were lost and 7.2 million people were affected. Till July 7, as many as 27 of the 38 districts in Bihar recorded over 40 per cent deficit rainfall. Over the next week, seven of these rainfall-deficit districts were under flash floods.

The second spell of heavy rains began in the first week of August. Due to these, Kerala, Karnataka, Andhra Pradesh, Maharashtra, Gujarat and Goa have suffered the fury of floods. In Kerala, 88 people have died in rain related incidents in the past week.

Currently, the rains are on a break in the state but IMD has already issued a red alert for heavy rains in many districts in the coming days.

If this is not climate change, what is? 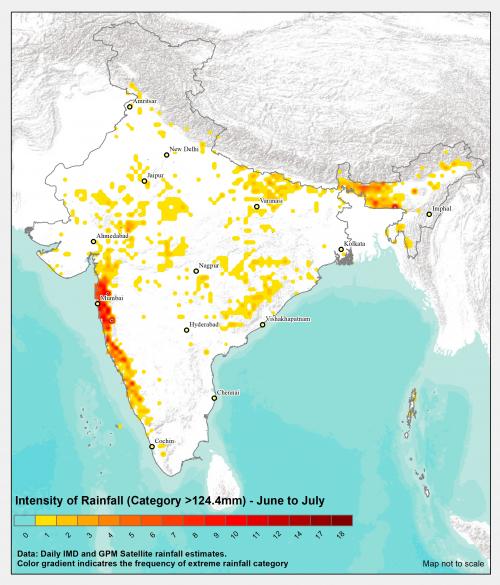 The frequency value between 0 to 18 with a combined month of June and July. Photo: Giriraj Amarnath/IWMI, Colombo

Many regions have had very less rainfall for extended periods of time and when it has indeed occurred, it has been aplenty. The usual nature of a monsoon with rains occurring frequently over an extended period in time can no longer be seen. This has pushed these areas to be either under drought or flood at any given point of time.

The IMD was also not sure about the existence of weak El Niño conditions up until March. This is when forecasters from around the world had declared that the conditions were prevalent since early this year.

Even when IMD finally declared that the conditions were prevalent, it had said that they would abate by early summer. But El Niño has persisted and continues till date. The temperatures will come back to warm neutral conditions only by the end of the monsoon, if at all IMD gets it right this time.

The relationship between El Niño and the distribution of monsoon rainfall remains tenuous but some research has indicated a strong correlation. A study published last year in the journal Climate Dynamics had established that the distribution of rainfall over the Indian Subcontinent has large scale patterns which are influenced by global sea surface temperature anomalies like the El Niño.

But more research is required on the subject to ascertain how exactly the different phases of El Niño impact the distribution of rainfall in India, especially during monsoons and to what extent global warming might be playing a part in this.