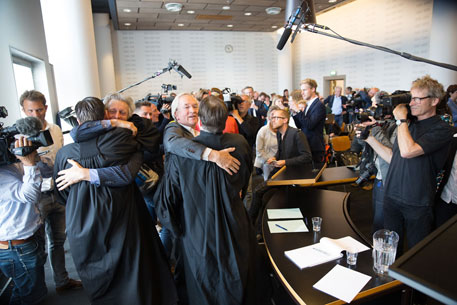 In a landmark ruling, a district court in Netherlands has ordered Dutch government to cut its emissions by at least 25 per cent within five years. Current policies of the country would lead to reduction of 17 per cent.

The ruling has come as a surprise to policy makers and environmentalists as legal systems usually keep away from matters of international politics. “The Dutch court ruling is clear: the government has a legal duty to protect its people against the threat of climate change,” Faiza Oulahsen of Greenpeace Netherlands said in a statement provided to news website ThinkProgress.   “Litigation against governments who fail to take climate change seriously will spread around the world.”

The ruling was organised by Urgenda, an international sustainability advocacy group. “Urgenda and nine hundred co-plaintiffs were victorious in the climate case today, forcing the Dutch government to adopt more stringent climate policies. The district court of The Hague has granted the plaintiffs’ claims, and the government is now required to take more effective climate action to reduce the Netherlands’ considerable share in global emissions,” says a statement published by the group.

“All the plaintiffs are overjoyed by the result. This makes it crystal clear that climate change is a huge problem that needs to be dealt with much more effectively, and that states can no longer afford inaction. States are meant to protect their citizens, and if politicians will not do this of their own accord, then the courts are there to help,” adds Urgenda director Marjan Minnesma, who in 2013 initiated this case against the Dutch State with a team of lawyers and nine hundred co-plaintiffs.

In February this year, the Norwegian government has pledged to cut greenhouse emissions by 40 per cent of 1990 levels by 2030. With the recent development, more countries are expected to follow suit.

Order of the Hague District Court regarding action to reduce the greenhouse gas emissions in Netherlands, 24/06/2015