Until now the scientific opinion was that converting CO₂ from gas to solid would take thousands of years, but it took less than two years 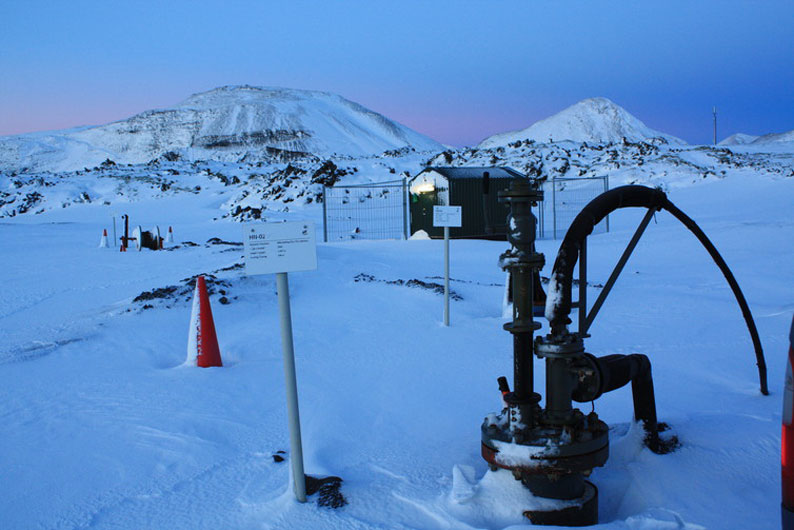 In a paper published today in Science my colleagues and I report on a successful trial converting carbon dioxide (CO₂) to rock and storing it underground in Iceland. Although we trialled only a small amount of CO₂, this method has enormous potential.

Here’s how it works.

Our paper is the culmination of a decade of scientific field and laboratory work known as CarbFix in Iceland, working with a group of international scientists, among them Wallace Broecker who coined the expression “global warming” in the 1970s. We also worked with the Icelandic geothermal energy company Reykjavik Energy.

The idea itself to convert CO₂ into carbonate minerals, the basis of limestone, is not new. In fact, Earth itself has been using this conversion technique for aeons to control atmospheric CO₂ levels.

However, scientific opinion had it up to now that converting CO₂ from a gas to a solid (known as mineralisation) would take thousands (or tens of thousands) of years, and would be too slow to be used on an industrial scale.

To settle this question, we prepared a field trial using Reykjavik Energy’s injection and monitoring wells. In 2012, after many years of preparation, we injected 248 tonnes of CO₂ in two separate phases into basalt rocks around 550m underground.

Most CO₂ sequestration projects inject and store “supercritical CO₂”, which is CO₂ gas that has been compressed under pressure to considerably decrease its volume*. However, supercritical CO₂ is buoyant, like a gas, and this approach has thus proved controversial due to the possibility of leaks from the storage reservoir upwards into groundwater and eventually back to the atmosphere.

In fact, some European countries such as the Netherlands have stopped their efforts to store supercritical CO₂ on land because of lack of public acceptance, driven by the fear of possible leaks in the unforeseeable future. Austria went even so far as to ban underground storage of carbon dioxide outright.

Our Icelandic trial worked in a different way. We first dissolved CO₂ in water to create sparkling water. This carbonated water has two advantages over supercritical CO₂ gas.

First, it is acidic, and attacks basalt which is prone to dissolve under acidic conditions.

Dissolving basalt means elements such as calcium, magnesium, and iron are released into pore water. Basaltic rocks are rich in these metals that team up with the dissolved CO₂ and form solid carbonate minerals.

Through observations and tracer studies at the monitoring well, we found that over 95% of the injected CO₂ (around 235 tonnes) was converted to carbonate minerals in less than two years. While the initial amount of injected CO₂ was small, the Icelandic field trial clearly shows that mineralisation of CO₂ is feasible and more importantly, fast.

Storing CO₂ under the oceans

The good news is this technology need not be exclusive to Iceland. Mineralisation of CO₂ requires basaltic or peridotitic rocks because these types of rocks are rich in the metals required to form carbonates and bind the CO₂.

As it turns out the entire vast ocean floor is made up of kilometre-thick oceanic basaltic crust, as are large areas on the continental margins. There are also vast land areas covered with basalt (so-called igneous provinces) or peridotite (so-called “ophiolitic complexes”).

The overall potential storage capacity for CO₂ is much larger than the global CO₂ emissions of many centuries. The mineralisation process removes the crucial problem of buoyancy and the need for permanent monitoring of the injected CO₂ to stop and remedy potential leakage to the surface, an issue that supercritical CO₂ injection sites will face for centuries or even millennia to come.

On the downside, CO₂ mineralisation with carbonated water requires substantial amounts of water, meaning that this mineralisation technique can only succeed where vast supplies of water are available.

However, there is no shortage of seawater on the ocean floor or continental margins. Rather, the costs involved present a major hurdle to this kind of permanent storage option, for the time being at least.

In the case of our trial, a tonne of mineralised CO₂ via carbonated water cost about US$17, roughly twice that of using supercritical CO₂ for storage.

It means that as long as there are no financial incentives such as a carbon tax or higher price on carbon emissions, there is no real driving force for carbon storage, irrespective of the technique we use.

*Correction: The sentence has been corrected to note that gas volume rather than density decreases when it is compressed. Thankyou to the readers who pointed out the error.