Of the obvious, the banal and the rerun

Two Country Statements—by India and the US—emerged on the penultimate day of the ongoing COP23, but neither had anything new to say 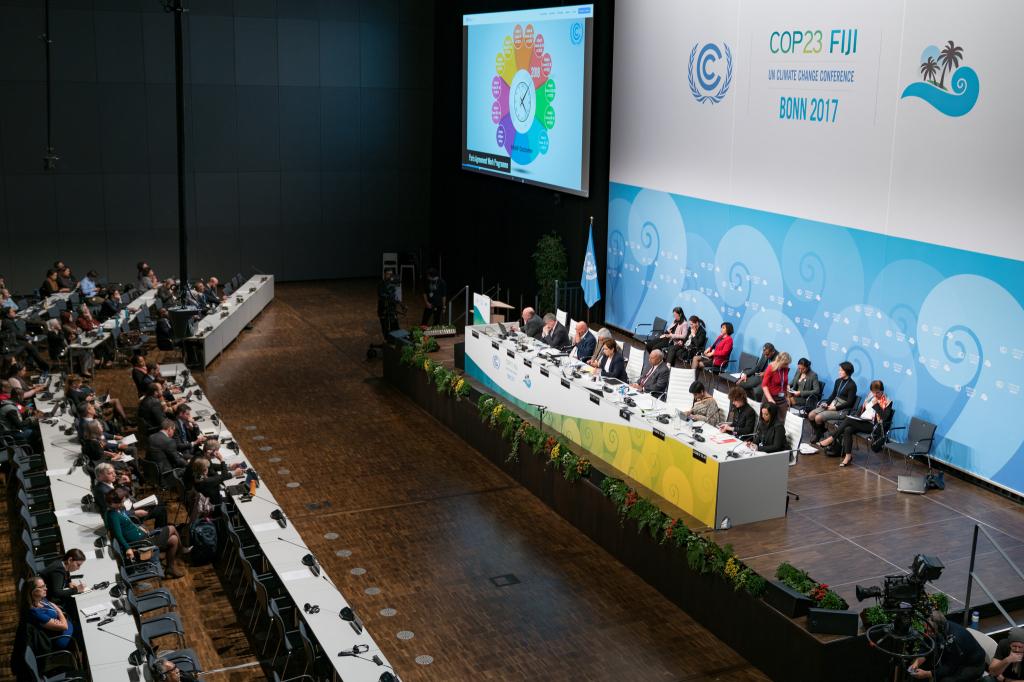 Without an ambitious commitment from the US, the Paris Agreement will neither be equitable nor ambitious. Credit: UNclimatechange / Flickr

The penultimate day of the 23rd Conference of Parties (CoP) on climate change in progress in Bonn, Germany, was marked by the presentation of Country Statement by India. In a high-pitched narration, India’s environment minister Harsh Vardhan read out a note which merely stated the obvious: reposing its faith in the process of the Paris Agreement. The statement said, “The task ahead is effective operationalisation (of the Agreement) in accordance with agreed principles of Equity and Common But Differentiated Responsibilities and Respective Capabilities (CBDR-RC).”

Vardhan went on to say, “…we expect that the CoP23 outcomes are balanced and reached upon through a Party-driven process. They should not result in reinterpretation of the Paris Agreement and equal progress should be made on all pillars.” Earlier, outlining what was expected of the conference, he had said that CoP23 “would set the stage for the 2018 Facilitative Dialogue, accelerate pre-2020 action and firm up the modalities for implementation of the Paris Agreement.”

Besides waxing eloquent on how India’s traditional knowledge can become a “beacon of light” at this stage, the statement also stressed on energy actions. It said that India has taken ambitious mitigation and adaptation actions in the field of clean and renewable energy as well as enhancement of energy efficiency. “Planned actions and economic reforms have contributed positively to the rapidly declining growth rate of energy intensity in India and steps are being taken to decouple the Indian energy system from carbon in the long run.”

Commenting on the statement, Chandra Bhushan, deputy director general, Centre for Science and Environment said, “We all know that equity and CBDR are important and so is ambition. The minister has said nothing new. However, the fact remains that in pre-2020 action, without any commitment from the US, equity and CBDR are meaningless. In fact, without an ambitious commitment from the US, the Paris Agreement will neither be equitable nor ambitious. No one at CoP23 in Bonn is stating this obvious fact.”

The presenter of the US Country Statement was Judith Garber, acting assistant secretary for oceans and international environmental and scientific affairs. She began her statement with the now oft-repeated position adapted by her country: while the US intends to withdraw from the Paris Agreement as made clear by President Trump, it remains open to the possibility of rejoining the process at a later date, “under terms more favourable to the American people”.

For its major part, the US Statement dwelt on the energy actions and the partnerships that the country had built up: “the US is working bilaterally with countries such as China and India to advance power sector transformation and smart grid technologies, energy efficiency and carbon capture utilisation and storage,” the Statement asserted, adding that the US wanted to support the cleanest and most efficient power generation, “regardless of the source”.

Garber ended by saying that the US intends to remain engaged with its partners and allies around the world on these issues”. The question that remains is whether this chest-thumping and unilateral assertion of engagement will amount to anything in resolving an issue which needs collective and coordinated action.