Ladakh’s Average temperature has increased in last 3 decades while precipitation had reduced; Rainfall has also decreased in Lahaul-Spiti & Kinnaur 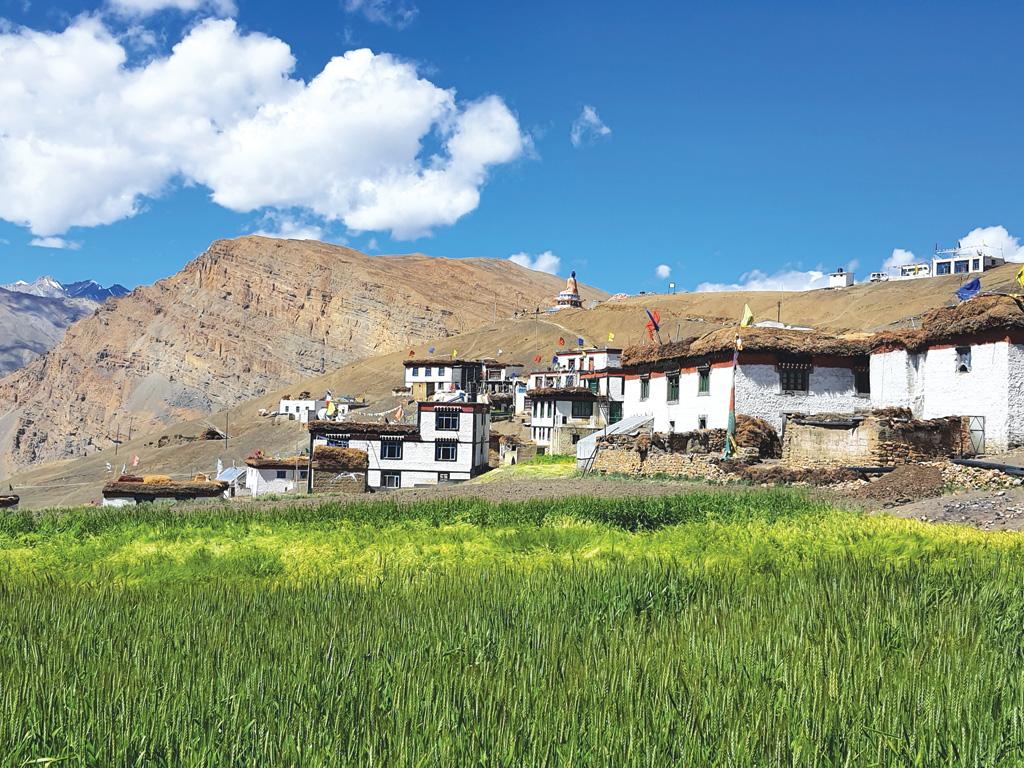 The harvesting season of the green pea crops in the cold deserts of Komik village in Himachal Pradesh is progressively getting delayed due to changing precipitation patterns (Photograph: Raju Sajwan)

Located high in the Himalayas, our lives and livelihoods are intertwined with snow. But the sudden snowfall in January, following a warm December, was unexpected and has left us all in shock,” says Sonam Targi, president of Spiti Civil Society in the town of Kaza, which at 3,650 metres above sea level is the largest commercial centre of Spiti Valley.

Surrounded by desert-like rugged terrain on all sides, Kaza is the gateway to the Himalayan cold desert that spans Lahaul-Spiti and Kinnaur districts of Himachal Pradesh in the south to Ladakh in the north.

Targi says the warm winters and unexpected snowfall are symptomatic of a bigger problem: The changing precipitation in the entire cold desert region. Even 15 years ago, November would bring with it the season’s first snowfall in the Valley and by March, there would be a healthy snow cover of 1.5 metres.

Last winter season (November 2020-April 2021), the snowfall started as late as March and by April, the snow cover was only 0.5 metres, which melted almost as soon as it fell, says 49-year-old Tepka, a resident of Komik, the world’s highest motorable village, situated just 18 kilometres from Kaza.

He says the changing precipitation is impacting farming, which is already difficult in the harsh climatic conditions of Spiti. The 110 families in Komik grow jowar, vegetables and black peas for personal consumption, and green peas for the market.

April is the sowing season as the soil remains moist from the melting snow. In June and July, the region receives scanty monsoon rainfall which complements the water from the melting snow, before harvesting begins in September. Residents claim even this scanty rainfall has almost halved over the years.

The overall rainfall in Lahaul-Spiti has gone down “significantly” in the past three decades (1989-2018), suggests an analysis by the India Meteorological Department (IMD). A significant decrease means more than 95 per cent weather monitoring stations in the district have recorded a downward rainfall trend (see 'Waiting for a normal shower'). 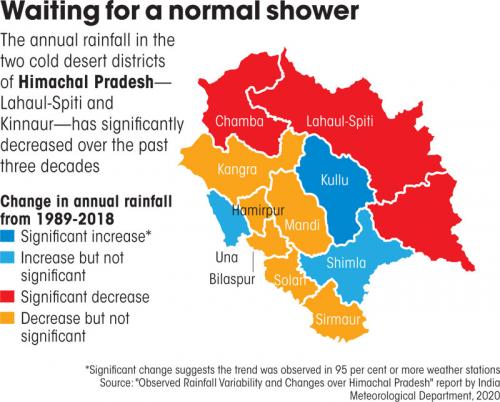 “For the past decade or so, we have started relying on a kool (an artificial water channel) that brings water from a spring 14 km away,” says Tekpa, adding that this arrangement is unsustainable. “The water in the spring also started decreasing in the past few years,” Tepka adds.

During the 2021 monsoon season, Lahaul-Spiti received 122.8 millimetres of rainfall, which is 68 per cent lower than the normal level, according to IMD.

The snow cover area also shrank from 23,542 square km in 2019-20 to 19,183 sq km in 2020-21, a decline of 18.52 per cent, as per a report by the Centre on Climate Change of the Himachal Pradesh Council for Science Technology and Environment and the Space Applications Centre, Ahmedabad.

The Beas basin has reduced by about 19 per cent. The Ravi basin has seen an overall reduction of 23 per cent in the total area under snow cover, while the snow cover in the Sutlej basin has shrunk by 2,777 sq km (23 per cent) to 9,045.51 sq km.

The impact of the changing precipitation pattern can also be seen in the livelihood of the residents in Spiti's Langcha and Hikimm villages, which have the highest post office in the world.

Most families in the region own livestock including yaks, cows, sheep, goats and donkeys. “Earlier, fodder was easily available here but now we need to travel 5-6 km for it as the natural vegetation has changed,” says Angdui Norbu from Langcha.

Ishita Khanna, who heads non-profit Ecosphere in Spiti, says in many villages across the region, traditional springs remain dry for years because of the dipping precipitation levels. “In 2017-18, the valley did not receive any snowfall. Many villages now rely on artificial glaciers to keep the springs alive,” she says. In the Lahaul part of the district, which is warmer than Spiti, residents say cloud burst events are on the rise.

On July 27, 2021, the Udaipur sub-division in Lahaul recorded an unprecedented 20.8 mm rainfall that triggered a flash flood which washed away most bridges in the district. “We had never seen so much rain in a single day. It impacted the crops,” says Sudershan Jaspa, a farmer and member of the Lahaul Potato Society.

The impact is equally evident in the cold deserts of Ladakh, where the temperatures are consistently rising and the warm weather now lingers on much longer. Precipi- tation in the form of rain and snowfall is also on the decline.

Researchers from the Jawaharlal Nehru University in Delhi and the National Institute of Hydrology in Jammu in 2016 found a “rapid” and “significant” temperature increase over Leh in 1991-2013 after a “short period of cooling” between 1979 and 1991.

“The current two decades (1991-2013) show a significant and steep increase in the temperature over Leh, possibly foreshadowing further warming of the environment over the region,” reads the report published in Springer. The researchers also found a declining trend in the annual precipitation between 1995 and 2012. 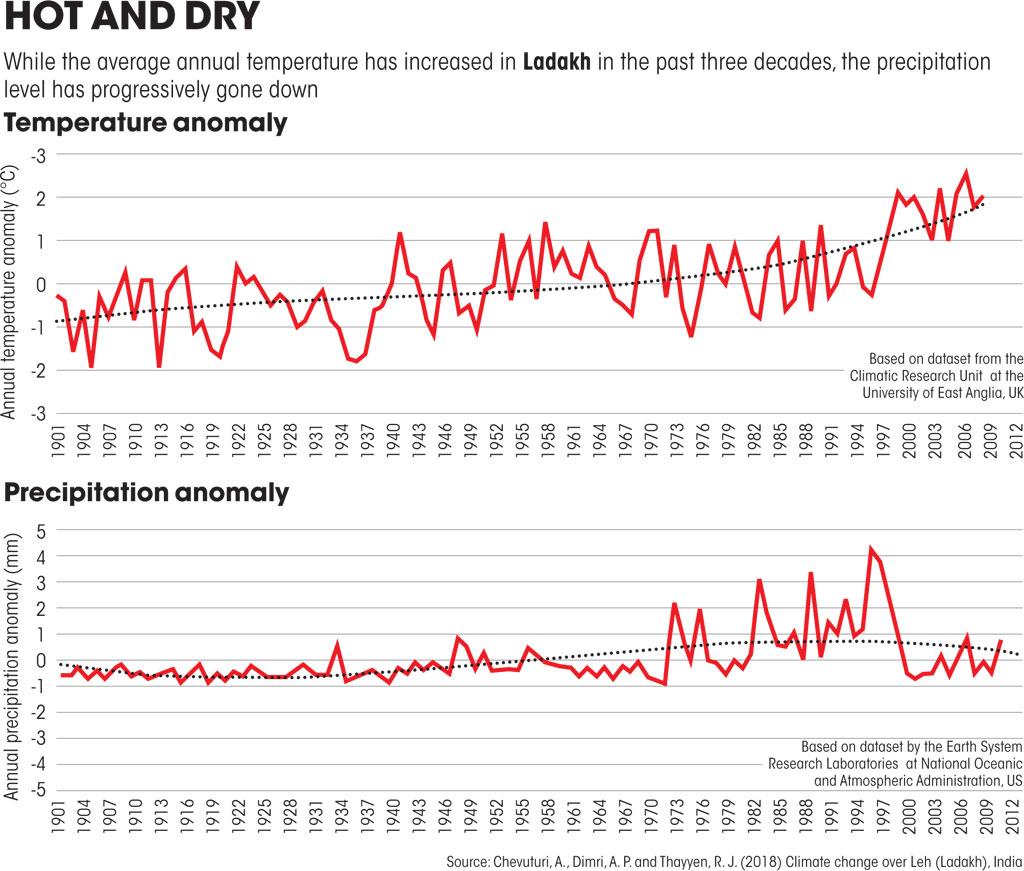 The impact of the changing temperature can be seen in the glaciers. The Pensilungpa glacier in the Zanskar Valley Ladakh’s Kargil district had shrunk by 36 per cent between 1962 and 2012, says a study released on August 6, 2021, by the Wadia Institute of Himalayan Geology, Dehradun, under the Union government’s Department of Science and Technology.

The study found that increasing temperature and low winter precipitation were responsible for the shrinking of the glacier between 2015 and 2019 at a rate of 6.7 m per annum.

When Down To Earth travelled in September 2021 to Leh, the administrative headquarters of Ladakh, the region was recording a daily maximum temperature of about 25 degrees Celsius. This is unusual as winter begins by this time, and the temperature is around 15°C. Leh and its surrounding mountainous regions were also experiencing short bursts of rainfall, which is abnormal as the monsoon season occurs between May and August.

Residents say the overall rainfall during the monsoon season is also reducing. The normal monsoon rainfall for the region is 37.6 mm, but this year it was even lower at 21.9 mm, a deficit of 42 per cent, suggests IMD.

“Even 15 years ago, every village household around Leh would grow barley, potatoes, peas and maintain livestock. Now most of the residents have quit farming and shifted to tourism and other trades,” says Ishey Paljor, executive director of non-profit Leh Nutritional Project (LNP) that helps villages build artificial glaciers. He says the situation is dire in villages on the south facing slopes (towards the Indian subcontinent) of the mountains that are completely dependent on rain and snow for water.

It has also had an impact on the region’s biodiversity, especially around its lakes and wetlands. “These lakes are mostly fed by the springs and streams flowing down from the melting snow in the mountains and glaciers. Bird species like the magpie, sparrows and red-billed chough have decreased in number,” says Chotak Gyatso, programme manager at LNP.