Overpopulation is not the source of all our ills

In these times of climate change, the world needs fresh ideas to get out of the logjam over whether population is a curse or a resource 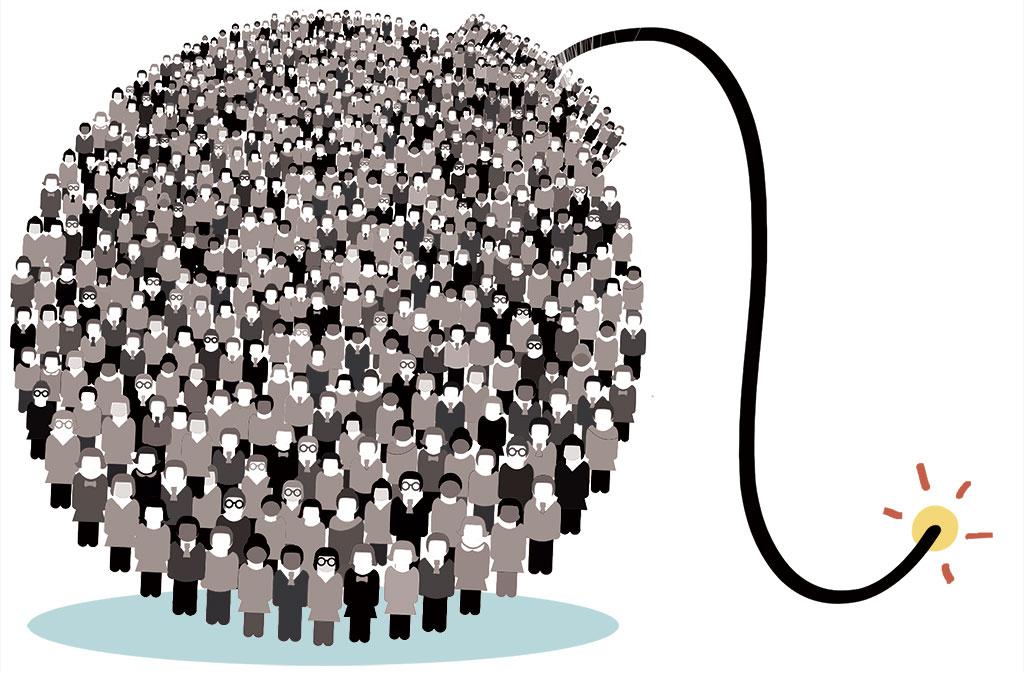 In 1968, a young American butterfly expert named Paul Ehrlich published The Population Bomb in which he made the controversial claim that “the battle to feed humanity is over”, and that hundreds of millions will “starve to death” in the following two decades. He also prophesied that should we fail to contain the population juggernaut, not to mention our obsession with economic growth, Earth itself would go into terminal decline.

His “bomb”, however, turned out to be a damp squib, as he underestimated the power of human ingenuity (read modern science)—the Green Revolution managed to produce enough food to save the surging millions from the jaws of the proverbial wolf.

It is 50 years since the book came out, but despite being proven wrong, the septuagenarian, who was once slurred as “worse than Hitler” for advocating forced sterilisation, is crying wolf again. He recently told The Guardian “the collapse of civilisation is a near certainty within decades…as long as perpetual growth of the human enterprise remains the goal of economic and political systems.”

Ehrlich is the posterboy for the neo-Malthusians who have revived the debate about the catastrophic consequences of runaway population growth first articulaed by an English Reverand T R Malthus in his 1798 Essay on the Principle of Population. Malthus, appealing to the powerful metaphor of an inexorable machine, essentially argued that the progress of populationtends to be geometric (that is, 1, 2, 4, 8, 16, 32, 64…), while available food, even if we account for the extra impetus of more farms hands, increases at most by arithmetic amounts (1, 2, 3, 4, 5, 6, 7, 8…). Anyone, even those unschooled in basic arithmetic, can figure out the eventual, albeit fallacious, outcome of this discrepancy.

Clever demographers can see it for what it is—statistical sophistry, yet this metaphor of a human machine that reproduces exponentially has endured in public imagination. China’s One-Child Policy and India’s long-running family planning programme are grim reminders of the insidious power of numbers. On March 9, the Supreme Court dimissed a petition that sought to ration babies to only two per family. The Court prudently put the matter in the court of Parliament. At least five more petitions seeking a similar sanction on Indian wombs are in the queue, all of them based more or less on the imagined premise that “overpopulation” is the source of all our ills—dwindling resources, unemployment, crime, environmental damage, disease, and poverty.

We forget it was Indira Gandhi who, in 1972, had painted poverty, and not population, as the greatest polluter. Ironically, it was her government that committed one of the most heinous excesses in the name of population control during the Emergency. Likewise, in 1974, Karan Singh, her minister, had famously described “development as the best contraceptive”, but did a U-turn later calling “contraceptive as the best development.”

This ambivalence about population lies at the heart of the academic debate over whether it is a curse or a resource. In one of the best-known wagers of the 20th century, in 1980, Ehrlich agreed to bet Julian Simon, a business professor who treated population as a resource, that the price of five key industrial metals—chromium, copper, nickel, tin, and tungsten—would go up in the next decade. This was, as Paul Sabin put it in The Bet, “a contest that directly tested their competing visions of the future, one apocalyptic and fearful of human excess, the other optimistic and bullish about human progress.”

Ehrlich lost, yet again. The price of all the five metals went down despite the world adding 800 million to its census. For doomsayers like Ehrlich, an important takeaway from this smarting was that abundance doesn’t necessarily lead to scarcity: dwindling resources and rising prices spur markets to innovate or find substitutes.

It is true that for the most part Ehrlich’s dire predictions about the population bomb haven’t come to pass. On the contrary, as a recent World Bank report suggests, most countries’ population is on the decline. Indeed, and this for those who love spreading the canard about the so-called ªMuslim growth rateº, fertility rates in Muslim-dominant countries like Iran, Saudi Arabia, Bangladesh and Indonesia have more or less stabilised, while Egypt and Pakistan are not far behind. Africa is the only outlier but there are signs it is going the way of the rest.

That said, the total population is still growing, even if not as rapidly. At current rates, it is likely stabilise at 11 billion by the end of this century. For neo-Malthusians like Ehrlich, this is way above what the Earth can sustain—for him, two billion is the upper limit. Ehrlich and fellow travellers like the Harvard biologist E O Wilson want half the planet emptied of human beings and shoved into cities lest we push the planet over the tipping point.

Most environmentalists agree on the alarming symptoms but many disagree on the diagnosis. For them, the real elephant in the room is not human rabbits in the poor world, but human caterpillars with gargantuan appetites in the rich world. To get a sense of how unfairly the global consumption pie is sliced up, pitcure this: the richest half billion (about 7 per cent of the global population) account for 50 per cent of the world’s emissions, while the poorest 50 per cent contribute a mere 7 percent. The scale of “ecological footprint”—the number of hectares needed to eke out necessary resources such as food and clothes for an average person—betrays the same sense of inequity: 9.5, 7.8 and 5.3 respectively for the US, Australia and Britain, against 2 for China and 1 each for India and Africa.

For many, this unconscionable disparity is the real source of our social and environmental malaise. The poor breeding like rabbits are mere scapegoats. For, it is easy, yet facile, to imagine a distant tomorrow in which a spiralling human count outstrips available food supply. But, if only we were to peep into history, we would find that the real culprit for our present-day wants and woes has more to do with inequality, wars, and colonisation of other, arguably more sustainable and just, worldviews.

From this angle, the narratives of doomsayers like Malthus and his modern-day acolytes appear guilty of what the French literary theorist Rene Girard called scapegoating—stories in which “the victimisers see themselves as the passive victims of their own victims.”

As neo-Malthusians and cornucopians lock horns, there seems little hope of solving the logjam. Clearly, we have no choice but to drastically alter our lives lest all of us are swamped by the imminent environmental avalanche.

However, as British environmental critic Larry Lohmann argues, “Deep down, the conflict is less about numbers than about rights, the impossible ideal of a self-regulating market, and the differing demands of centralised and decentralised power. It is a political and cultural clash, not a dispute between the informed and the uninformed.” American philosopher Richard Rorty once wrote: “It is pictures rather than propositions, metaphors rather than statements,which determine most of our philosophical convictions.” Perhaps what the world needs is a new metaphor to start a fresh conversation on population.

(This article was first published in the 16-30 April issue of Down To Earth under the headline 'The Malthusian Muddle').