On February 13, the combined Arctic and Antarctic sea ice numbers were at their lowest point since satellites started measuring sea ice in 1979 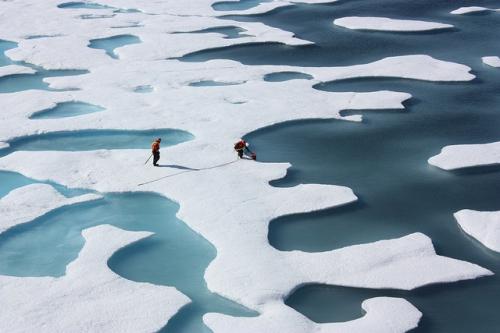 In what seems like the effect of warmer temperatures on our poles, both the Arctic and the Antarctic witnessed a dip in sea ice extent earlier this month. The Arctic sea ice appears to have reached a record low wintertime maximum extent on March 7. Similarly, on March 3, Antarctica experienced its lowest ice extent at the end of summer.

Ice floating on top of the Arctic Ocean and the surrounding seas shrinks in a seasonal cycle from mid-March to mid-September. As Arctic temperatures drop in autumn and winter, the ice cover grows again until it reaches its yearly maximum extent in March. The ring of sea ice around the Antarctic reaches its maximum in September and its minimum in February.

This winter, a combination of warmer-than-average temperatures, winds unfavorable to ice expansion and a series of storms halted sea ice growth in the Arctic.

“We started from a low September minimum extent,” said Walt Meier, a sea ice scientist at NASA’s Goddard Space Flight Center in Greenbelt, Maryland. “There was a lot of open ocean water and we saw periods of very slow ice growth in late October and into November, because the water had a lot of accumulated heat that had to be dissipated before ice could grow. The ice formation got a late start and everything lagged behind–it was hard for the sea ice cover to catch up.”

The Arctic Report Card does not paint an encouraging picture. According to researchers, the Arctic continues to warm up at an “astonishing” rate. “The Arctic as a whole is warming at least twice as fast as the rest of the planet,” says Jeremy Mathis, climate scientist at the National Oceanic and Atmospheric Administration.

Warming in the Arctic is causing permafrost (normally frozen ground) to melt. As the permafrost is carbon-rich, when it melts it becomes a source of greenhouse gases.