The IPCC’s Special Report on Climate Change and Land shines a spotlight on food consumption, modern agricultural practices and desertification where serious action has long been deferred

Nitrous Oxide emissions from land have more than doubled since 1961, with cropland soils emitting around three megatonnes each year, according to the latest IPCC Report. Photo: Getty Images

Humanity's agricultural tunnel vision has undermined climate equilibrium on a planetary scale, according to the latest report on the Intergovernmental Panel on Climate Change (IPCC), released on August 8, 2019.

While forestry has long been a focus of carbon sink creation, the report shines a spotlight on three areas where serious action has long been deferred — food consumption, ‘modern’ agricultural practices, and desertification.

“With the help of our scientists, I will ensure the issues in this report that are within the scope of the United Nations Convention to Combat Desertification (UNCCD), are presented to ministers for strong and decisive action when they meet at the world’s largest intergovernmental forum where decisions on land use and management are made, the 14th session of the Conference of the Parties to the UNCCD, taking place in New Delhi, India, in three weeks’ time,” Ibrahim Thiaw, executive secretary of UNCCD, said in a press statement.

The global food system currently accounts for the majority of emissions from the ‘agriculture, forestry and land use’ (AFOLU) sector. If we include energy emissions from storage, transport, packaging, processing, retail, preparation, and waste, food accounts for 22-35 per cent of all anthropogenic emissions.

“Without intervention”, the IPCC finds, “emissions from the food system are projected to increase by about 30–40 per cent by 2050, due to increasing demand based on population and income growth and dietary change.”

The new report takes square aim at unsustainable patterns of food consumption. Despite an approximately 33 per cent increase in per capita calories consumed since 1961, 820 million people are still malnourished.

At the other extreme, two billion adults are overweight or obese. Most appalling, 25 to 30 per cent of total food produced is wasted. Eliminating that waste is a humanitarian imperative with a climate dimension.

The Food and Agricultural Organization estimates that food waste accounted for 4.4 gigatonnes and 8 per cent of CO2 emissions in 2011, giving lie to the notion that carbon consumption is a driver of human welfare.

In addition, the report identifies that dietary changes can mitigate between 1.8 and 3.4 gigatonnes of carbon dioxide equivalent per year by 2050.

Debates over diet often polarise into useless binaries between veganism and meat consumption or, worse, the dietary recommendations of different religions. But faith and culture can be a positive force for ethical consumption, which is why leaders across faiths (and political systems) would do well to heed the IPCC’s call for diversification, rather than demonisation of particular diets.

That means increasing access to coarse grains, legumes, fruits and vegetables, nuts and seeds, and reducing the carbon footprint of the meat industry. Along with the waste problem, these recommendations indicate the dire need for investment in redirecting food to those who most need it.

That supply chain management challenge presents billions of dollars in economic opportunity, but it must be accompanied by shifts in culture focused on common goods over private profits.

The IPCC is similarly clear about the excesses of ‘modern’ agriculture. This is most directly reflected in emissions of nitrous oxide, a greenhouse gas with nearly 300 times the warming potential of carbon dioxide.

Nitrous oxide emissions from land have more than doubled since 1961, with cropland soils emitting around three megatonnes each year. The IPCC attributes this to “inefficient nitrogen application (over-application or poorly synchronised with crop demand timings) to soils”. 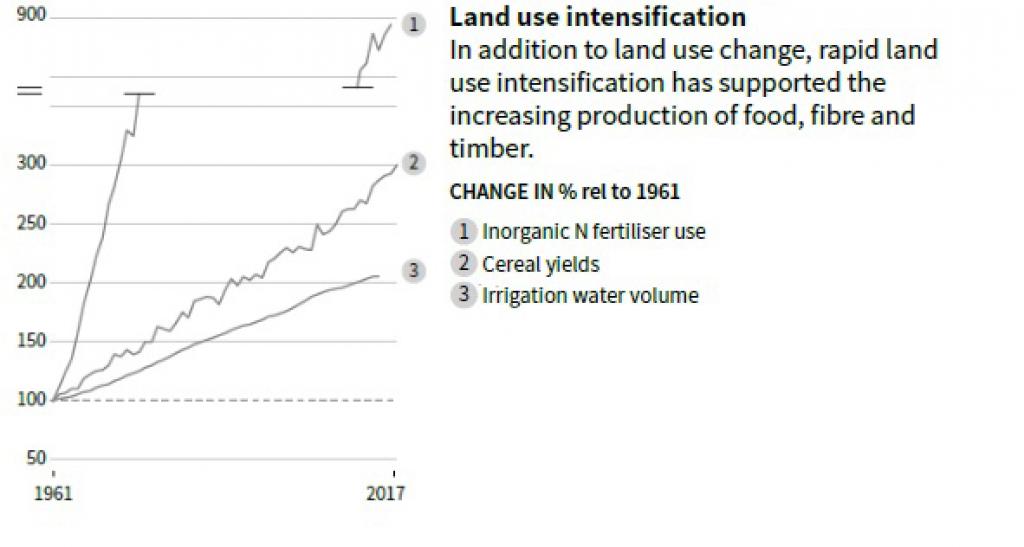 Simply, inorganic nitrogen fertilisers are being dumped into the soil in bulk, instead of investing in technology or labour which can apply them as needed. Our fertiliser fixation is failing to produce commensurate gains in crop yield, is polluting our groundwater, and is exacerbating economic inequality.

If more incentive was needed to act, the IPCC now presents an estimate of the climate change we could mitigate from crop and livestock activities — 1.6 to 4.6 gigatonnes of carbon dioxide equivalent per year until 2050.

The solution lies in revolutionising farm-level management, a challenge in developing countries with small land-holdings and limited capital to invest. So far, the government has attempted to hand-hold farmers with a suite of top-down services — crop calendars, weather and market advisories, technological demonstrations.

This approach has created a centralised agricultural administration with a wealth of accumulated knowledge and expertise, but which (1) reacts to rather than anticipating rapidly evolving climate challenges and (2) is unable to tailor its services to the farm-level.

Information technology solutions for farm-level management are emerging, including in India. Their services are not targeted at subsistence farming, but this could change if (as the IPCC recommends) the government invested in bridging the affordability gap.

The benefits to individual farmers are obvious; in addition, the creation of a real-time farm-level data eco-system would also be a public good, enabling the government, businesses and consumers to anticipate and respond better to climate-based disruptions.

Such a technology-driven approach has the potential to worsen the situation, if adopted only by high-income farmers to extract the last ounce of value from land with no concern for its long-term health. Yet, as part of a ‘sustainable land management approach’  (as the IPCC recommends), it is one of the few solutions with significant upside for mitigation, adaptation, as well as income generation.

Lastly, the IPCC’s report should motivate action on desertification and soil degradation. The population exposed to the risks associated with desertification has sky-rocketed since the 1960s.

By 2050, between 170 to 270 million people living in drylands will be vulnerable to water stress, drought intensity and habitat degradation. The United Nations has dedicated this decade to combating desertification, yet the climate benefits of this push are poorly understood.

The IPCC is highly confident that measures to combat desertification can promote soil carbon sequestration. It also highlights several co-benefits of such measures; for example “reducing dust and sand storms and sand dune movement can lessen the negative effects of wind erosion and improve air quality and health”. It is less clear what amount of carbon can be sequestered in drylands.

The report emphasises, though that “preventing desertification is preferable to attempting to restore degraded land”. That involves preserving the topsoil and soil quality in currently cropped land.

The local benefits of practices such as growing green manure crops and cover crops, crop residue retention, reduced/zero tillage have long been known. The report incentivises such practices by identifying their potential to mitigate climate change — the use of cover crops, for example, could sequester as much as 0.44 gigatonnes of carbon dioxide each year, even if applied over only a quarter of the world’s cropland.

The signature issue linking land and climate  tends to be forests — this is unlikely to change. However, using the land to manage climate change will require a broader re-alignment in the agriculture and food value chains.

Within the limited aims of the past century, these are highly successful systems with entrenched practices. Changing them will require an investment exceeding the ambition of the Green Revolution.

The country that leads on empowering its most vulnerable citizens with sustainable micro-management of food and agriculture value chains will find a global market for its solutions.

The Green Revolution has always been taught in Indian schools as the triumph of a budding scientific establishment over biology. Even today, the language of that revolution — better inputs to increase yields — doubles up as the language of progress.

For a growing nation home to nearly 200 million under-nourished people, that seems only natural. This IPCC report, though, is evidence that driving our soil resources to the brink will not solve hunger or malnutrition.

We can now move past the notion of ‘development’ as a shift away from agriculture and into services. In a time of climate change, technological and information services for agriculture will be the central pillar of resilient economies.