Indian scientists have confirmed and tracked the retreat—over 3kms—of an important Himalayan glacier, attributing it to climate change, and giving a shape to the changes to come 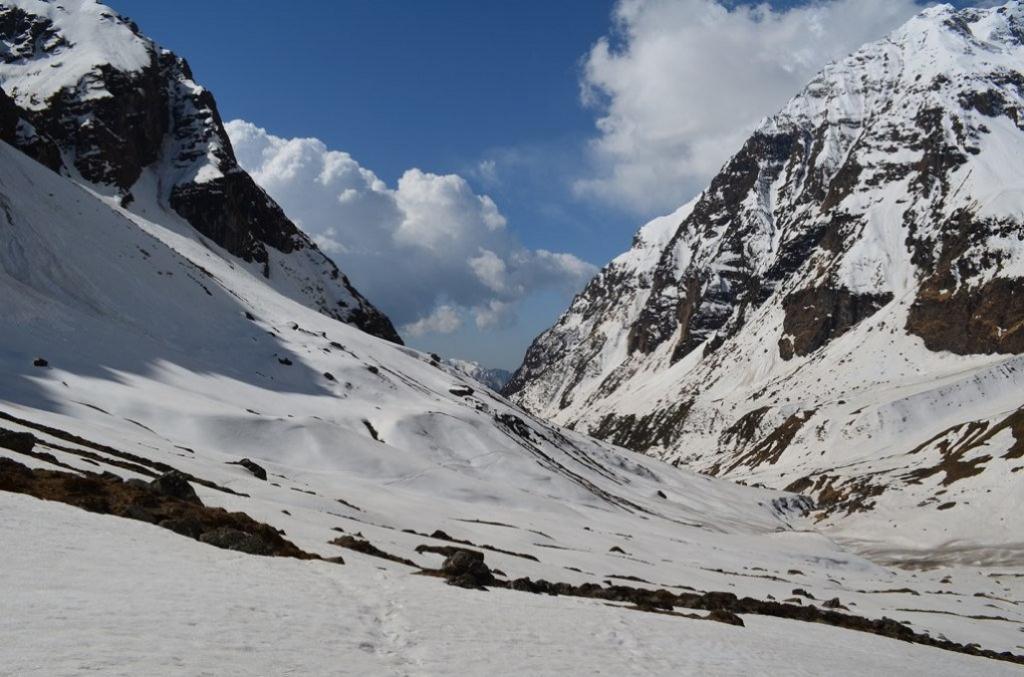 The Pindari glacier has retreated 51 metres each year since 1976. Credit: Laura7581/Flickr

The snout of the Pindari glacier, in the upper Himalayas of Kumaon region and the source to Pindar River, a major tributary of Alaknanda river, has retreated over four decades, according to latest scientific research that adds to the data officially confirming the Indian Himalayan glacier loss.

The findings of the joint research by scientists from Kumaun University, Nainital; Uttarakhand Space Application Centre, Dehradun; and Indian Institute of Science Education And Research Kolkata, may trigger more vigorous scientific studies on quantifying glacier retreat in Pindari as well as other glaciers of the Himalayas, the report in the journal Remote Sensing and Environment says.

The scientists assessed the retreat of the Pindari glacier from 1976 to 2014, using visual interpretation of remote sensing data. They used global positioning system (GPS) coordinates to determine the latest snout position in 2014, and marked the location of snout using a series of periodic Landsat images and manually digitized records.

They marked the snow area and snout point for different years, using satellite data, and compared the datasets to measure the changes in the glacier position and the distances to which the glacier shifted.

“High priority research fund(s) should be raised to conduct similar assessments in other mountain ranges situated across the entire Himalaya,” the report concludes.

Gajendra Singh Rawat, scientist from the Uttarakhand Space Application Centre, Dehra Dun and one of the study authors, says that while his team has not analysed the glacier mass balance, they have used “actual ground truth points for some years and we also used the old people’s observation and remote sensing data.”

“We found that small streams around the glaciers are accelerating the retreat process,” he told thethirdpole.net.

Scientists linked Pindari’s and other Indian Himalayan mountain glaciers’ retreat to climate change and cautioned over the implications for water storage in the region, given that Himalayas are the lifeline of water to at least two major Indian rivers, the Ganges and Brahmaputra.

Pindari’s retreat of about 1.5 kilometres estimated over a 40-year period “is consistent with what is happening to mountain glaciers around the world because of climate change, said Govindasamy Bala, climate change expert and professor at the Center for Atmospheric and Ocean Sciences at the Indian Institute of Science, Bangalore.

The consequent decline in the volume of water stored in this glacier could have major implications for water flowing in the Pindari river, he said.

“The retreat clearly indicates the effect of historical warming. If the greenhouse gas emissions continue to increase, it is likely that the retreat would accelerate in the future,” said Bala. “The long term decline in the glacier volume could have devastating effects on water resources in this region. There could be also threat from glacial lakes that form from the glacier melt”.

The new research is consistent with other recent research findings from the Himalayas. For example, in 2017 a team of scientists from Indian Space Research Organisation and geologists from Andhra University, Visakhapatnam, led by ISRO scientist Babu Govind Raj K, reported in Geomatics, Natural Hazards and Risk that “Himalayan glaciers are showing reliable evidences of climate change.”

These scientists had mapped the glacier status in Bhilangna basin of Garhwal Himalayas, also in the state of Uttarakhand, using Corona and Cartosat satellite images acquired in 1965 and 2014. Bhilangna river is the southernmost tributary of the Bhagirathi river and joins it near New Tehri.

They reported that the main Khatling trunk glacier that receded by 4,340 metres and had fragmented into multiple valley glaciers, increasing the number of glaciers in the basin from 20 to 33. About 10% of the glacier area was also lost from 1965 to 2014.

A team from Indian Institute of Science Education and Research (IISER), Pune, reported in Annals of Galciology in 2016, how glacier lengths have been changing in the Himalayas. The IISER, Pune team had analysed changes in the length of 43 glaciers, including the Pindari, across the Himalayan and Karakoram ranges, during the period from 1850 to 2010. “The analysis revealed that Himalaya and Karakoram has warmed up about 1.5 deg (sic) Celsius over the period. This is consistent with global glacier retreat since Little Ice Age.”

In their paper, they refer to other published estimates of the retreat of Pindari, which suggests a total retreat of 3.08 kilometres from 1906 to 2010. This means “a long-term retreat rate of almost 30 metres each year over a period of 104 years,” said Argha Benerjee, assistant professor at the division of earth and climate science at IISER, Pune.

Banerjee, however, has some reservations about the new 2018 study on Pindari glacier. One is the absence of estimation of uncertainty of the measurements. “So we do not know about the accuracy of their numbers.” Banerjee also pointed out that the scientists have not compared their data with other data on the Pindari glacier.

Banerjee also said that while the long-term retreat is indeed an undeniable sign of climate change, looking at only one glacier is not advisable for constructing accurate climate signals.

“Unfortunately, such calibration formulas are known to us only approximately. Therefore, to construct accurate climate signal, one has to consider a large number of glaciers spread across a large geographical area.”

Bala said that – similar to sea level change – glacier formation or melt is a very slow process in the climate system. “Therefore if greenhouse gas emissions take the ‘business as usual’ trajectory, climate warming is likely to result in irreversible change to the Himalayan glaciers and the natural and human systems that are associated with them.”