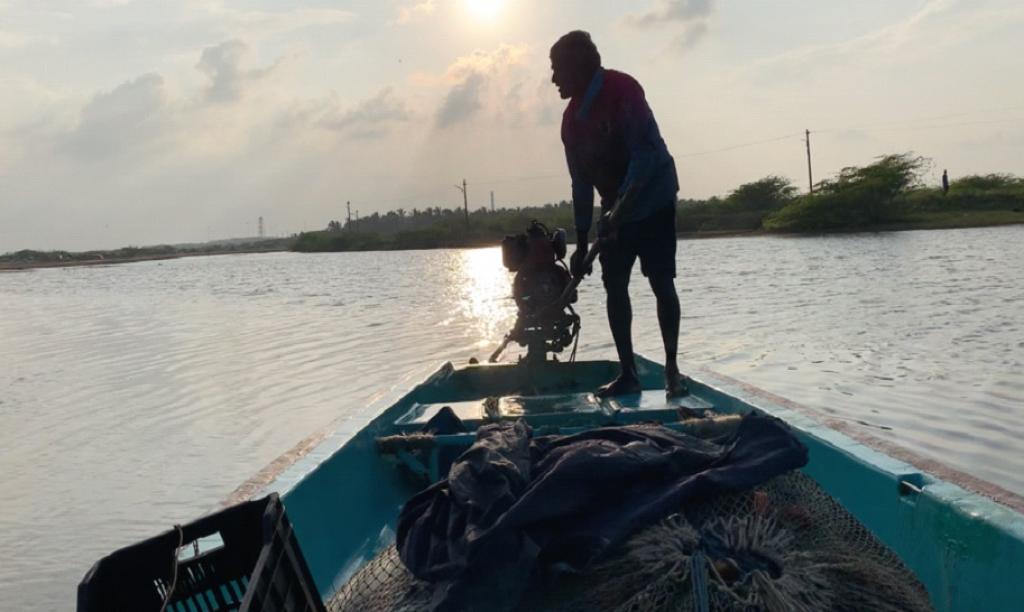 Thazhampettai village in Tharangambadi taluk of Tamil Nadu’s Mayiladuthurai district is home to 150 households, whose mainstay is fishing. But the worsening impacts of climate change over the past decade has made catching fish an increasingly unpredictable career, according to them.

Ocean currents in the area seem to be going awry due to the effects of climate change, leading to fewer catches for the fishermen. More frequent and deadlier cyclones as well as the construction of private harbours has only added to the woes of the fisherfolk.

Prasad R, 40, a third-generation fisherman, said his father and grandfather used to be able to accurately predict weather patterns, particularly wind direction, which can affect fish supply and safety. Now, sudden changes in weather, windspeed and currents make it difficult for the fisherfolk to safely bring their boats back to shore.

“When we throw our fishing nets, the flow of the underwater ocean current increases suddenly because of changes in the weather. If we spread our fishing nets over a particular area, the current drags them nets one or two kilometres away within a few minutes,” Prasad told this reporter.

“The river current is clearly visible to us, but we cannot tell the speed of the ocean current by looking at the surface water. The currents are becoming increasingly powerful nowadays because of climate change,” he claimed.

The ocean plays a major role in absorbing the sun’s radiation and distributing that heat across the Earth through ocean currents, according to the United States National Oceanic and Atmospheric Administration’s ocean exploration division. This leads to ocean evaporation, consequently, “increasing the temperature and humidity of the surrounding air.”

“Climate change has high influence over weather conditions which create more impact on coastal meteorology,” P Ravikumar, an assistant professor of geography at Presidency College, Chennai, said. Since ocean currents movements depend on factors like surface winds and temperature, changes above the sea are felt deep underwater.

He said currents in the Indian Ocean are dominated by the monsoon system. When the wind blows from the northeast to the southwest during the northeast monsoon season, the currents move from the Bay of Bengal to the Arabian Sea. Changes in the monsoon directly influence ocean currents.

The fishers feel these changes all too well. They cast their nets over the currents through which schools of fish travel. Prasad said fish came to the surface during the matthi (sardine), soora (tuna) and paara (Malabar King Fish) season.

They formed what the fishermen called a ‘mop’, allowing them to easily catch large quantities of fish. But over the past few years, less fish were being seen in the usual fishing spots, Prasad said.

“February, March, April and May are matthi season. During those months, income is good,” he said. The fisher families usually use that profit to survive for the rest of the year. “Only those four months are really guaranteed. After that season, income is not constant,” Prasad added.

Ravikumar said fishermen will throw their nets in the wrong places as ocean currents change. If the current is stronger than usual, the fish may move past the area earlier and faster than the fishermen expect. The currents and strong winds can also pull away or damage the nets — which the government does not provide any compensation for.

The longer the fishermen stay out, the higher their catch usually is. But longer hours on their three-blade propeller boats and rising diesel prices can lead to more expenditure than profit.

Prasad said he can earn up to Rs 5,000 on good days. But he must deduct fuel prices from that amount and split the earnings with the other fishermen on board. “If there is a loss on one day, we cannot afford go to sea for the next three or four days,” he said.

The fisherfolk get Rs 10,000 in compensation during the four-month-long hiatus and rainy season, according to Prasad.

“We need Rs 500 per day to take care of our family. That comes to roughly 15,000 per month,” he added. The government compensation is not commensurate to this as it equates to Rs 83 per day. 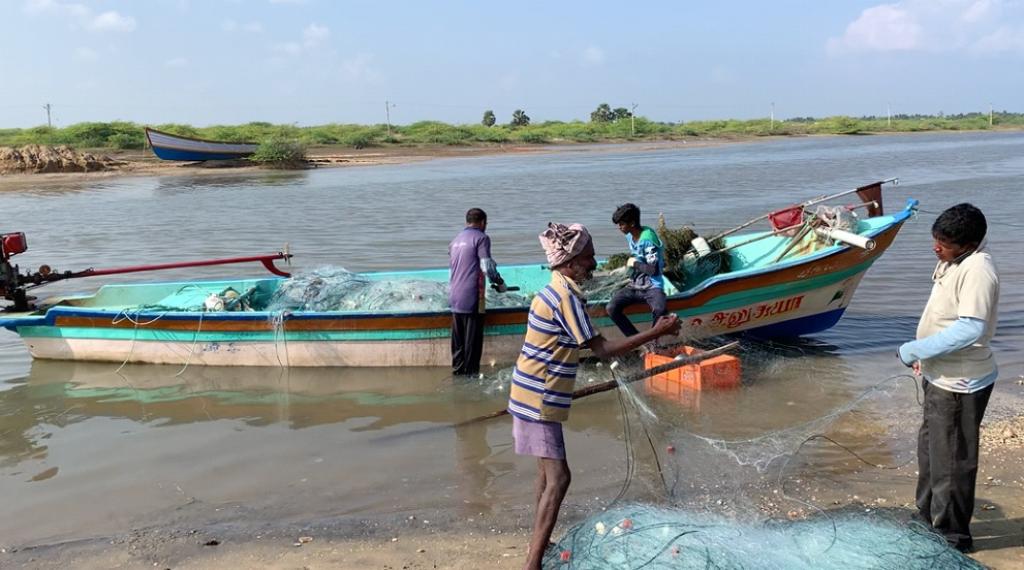 Fishermen unravel a net while two other knock shellfish and debris out of the net. Photo: Sonikka Loganathan

Tropical regions only have warm air currents unlike other climates that have a mix of warm and cold air. Ravikumar said this makes predicting the development and path of cyclones difficult. The result is longer government-issued cyclone warnings.

“They only give us cyclone warnings. They don’t tell us anything about weather conditions. Earlier, we used to predict the weather ourselves,” Shivajothi said.

He added that the warnings are declared about 20 days before landfall: “They stop us from going to sea before the depression forms. Conditions are still rough even when it has made landfall. We have to stay at home for a few days after that.”

Shivajothi gets nothing, unlike farmers and agricultural labourers, who get financial compensation during heavy rains.

“Ideally, after the cyclone, fisheries should increase since the cyclone causes a huge amount of upwelling of nutrient-rich subsurface waters to the surface which will increase the primary productivity of the ocean and hence the fish population,” Sharmila Sherin VM, a junior research fellow at the National Centre for Polar and Ocean Research, said.

“But we need to account for the habitat loss that may cause oxygen-poor conditions in the water column. There may also be an increase in the general pollution of the sea,” she added.

Underwater disruption is worsened further by the construction of the PPN Power Generating Company’s Thirukkadaiyur Port. Rajini, 35, another fisherman, points to a small cone, bobbing on the water, near the port. The company has also laid underwater pipelines that pump naphthalene from oil tankers to the port.

Harbours are also being constructed in Poompuhar and Tharangambadi, Rajini said.

“The eastern Indian coast is an emergent coastline, meaning the sea level falls, relative to land levels, making it prone to coastal deposition rather than erosion. If ports are built along emergent coasts, dredging is required," Ravikumar said.

“Dredging affects the action of waves, which leads to erosion,” he said. The eroded sand covers the microalgae that coats the sea floor and reefs, which provide nutrients and a nesting area for fish. The hidden and displaced nutrient supply leads to fewer fish.