The working group's mandate, among others, is to elaborate on modalities and make critical arrangements on global stock take which will take place in 2018 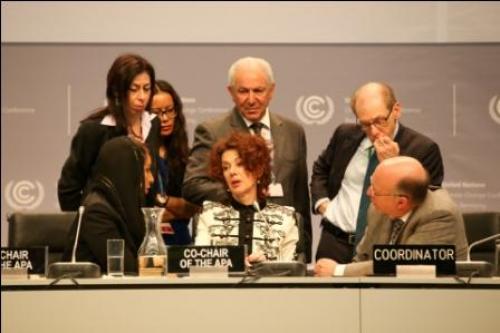 The Ad Hoc Working Group on the Paris Agreement (APA) organised its plenary session at the Bonn climate talks on Tuesday. It also elected Sarah Baashan from Saudi Arabia and Jo Tyndall from New Zealand as its co-chairs to carry out the work.

It is important to note that the APA is a body constituted at the Paris Summit which replaced the ADP (Ad hoc Working Group on Durban Platform for Enhanced Action). The ADP had the mandate to adopt a new climate agreement in Paris in December 2015.

The APA’s mandate, among others, is to elaborate on modalities and make critical arrangements on global stock take which will take place in 2018.

Further it will provide guidelines for Nationally Determined Contributions (NDCs) in the Paris Agreement, take the work programme of the Paris Agreement forward, make elaborate rules for transparency of action, mitigation and adaptation efforts, chalk out modalities for submitting national communications by the Parties and provide rules to promote compliance with the Paris Agreement.

The APA has also been assigned a crucial mandate of preparing for the next C0P (Conference of the Parties) to be held in Marrakesh in November 2016 and to bring the Paris Agreement into force.

While speaking for the Environmental Integrity Group, Switzerland spoke about the importance and the large volume of work ahead and urged the Parties to “move from negotiations of process to negotiations of result”.

Maldives, representing the Alliance of Small Island States group, cautioned the delegates “not to open political issues again which have already been resolved in Paris” and spoke of the necessity of a transparency framework and developing a clear work programme.

French economist and diplomat Laurence Tubjana, who presided over the APA’s plenary meeting, highlighted the need for cooperation and identification of linkages in the work of the three technical bodies currently convening in Bonn: the forty-fourth sessions of the Subsidiary Body for Implementation (SBI 44), the Subsidiary Body for Scientific and Technological Advice (SBSTA 44) and the first session of the APA.

On Tuesday, the SBI and the SBSTA started their programmes of action. The former adopted its provisional agenda after settling the differences among the Parties related to the registry of NDCs as mentioned in Article 4 of the Paris Agreement.

While the developed countries argued that the registry should only contain mitigation contribution, the developing countries put forth that the scope of the NDCs is broad to include adaptation as well. The SBI could adopt its agenda after assurance from the SBI Chair that this matter of registry of NDCs would be discussed further in detail.