With the current executive order, it is evident that the US has gone back on its climate commitments 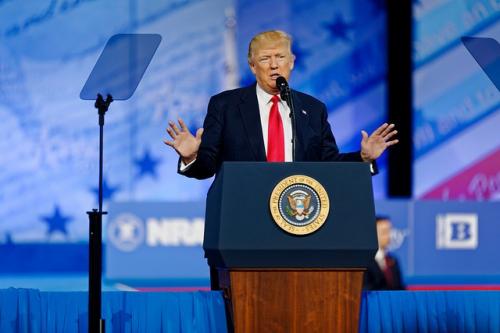 Trump’s order, which was signed on Tuesday, literally starts the process of dismantling the Paris Agreement—the landmark international pact adopted in 2015 to fight climate change.

Stating that “my administration would put an end to war on coal”, Trump’s executive order lifts the ban on federal leasing for coal production. It also lifts restrictions on production of oil, natural gas, clean coal and shale energy. The big question is will this move put an end to war against climate change?

By this order, the Trump administration, known for its skepticism on climate change, has overturned Obama’s policies on climate change. It has revoked many of the former president’s climate policies.

It also calls for immediate reviewing of the Clean Power Plan (CPP), which was at the core of Obama’s climate action plan to cut down emissions. Earlier, the budget decided to eliminate funding for the CPP. The CPP is literally over with this order.

The CPP regulation aims to reduce carbon dioxide emissions from US power plants by 32 per cent below their 2005 emissions level by 2030. Internationally, as part of its climate commitments, the US has pledged to reduce its emissions by a weak target of 26-28 per cent by 2025 against the 2005 levels.

Earlier in its budget, the Trump administration cancelled its funding of the global Green Climate Fund (GCF), which is meant to help developing countries address climate change.

With the budget declaration and current executive order, it is evident that the US has gone back on its climate commitments.

Key features of the executive order

What this means for the US

The US has clearly signaled its intention of completely fossilising its economy, implying reckless production and consumption of fossil fuels, leading to increased carbon emissions globally.

Trump’s speech, as he signed the executive order, focused on eliminating federal overreach and prioritising American jobs over addressing climate change. Accordingly, the strategy of restoring or increasing jobs is the development of domestic sources of energy. However, market trends reveal that there is an upsurge in jobs in the clean energy sector and in this regard Trump’s decision could actually prove to be counter-productive.

Who will lead the climate efforts?

In the current political muddle that the European Union (EU) is facing, it is unlikely that the EU, though a leader in the climate change issue earlier, would immediately step into the driver’s seat at this juncture. China has shown willingness to take up leadership role, but the international community waits to see how it tackles climate change domestically and internationally, and also what it does to improve its credibility. There is uncertainty on who would lead a country or a coalition of countries, one has to wait and watch.

What about the Paris Agreement

The US administration has not indicated any immediate plan to withdraw out of the Paris Agreement. It will thus be part of the negotiations and hamper the progress towards addressing climate change. This is substantiated by the nomination of climate skeptic and ExxonMobil chief Rex Tillerson as the Secretary of State, who will also serve as the chief climate negotiator.

Further, the executive order of the US sets a bad precedence for other countries that may also follow the US’ footsteps and dilute their climate actions or choose to opt out of the Paris climate deal.

Considering the increasing frequency and intensity of climate-related impacts, ideally the US, being the largest historical emitter, should revamp its energy administration and scale up its ambitions.

On the other hand, the US under Trump, has completely shrugged off its responsibility to address climate change and has chosen to have a fossil fuel-based economy and back off on its climate commitments of emission cuts and finance.

The US failing to accomplish its climate targets would mean that achieving the objective of the Paris Agreement to stay within the safe temperature limits of 2 degrees Celsius and strive for 1.5 degrees Celsius would be next to impossible now. The onus then falls on other countries to heavily scale up their climate efforts and try to save the planet.