Up to 100 per cent coral reefs affected by bleaching in parts of the Caribbean, says report 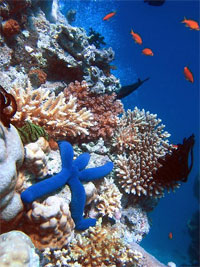 Climate change-induced sea level rise is causing trillions of dollars of damage to the coral reefs across the small island nations. A United Nations report has estimated that the sea-level rise in the 52 small island nations is up to four times higher the global average, putting the environment and socio-economic development in these nations at a greater risk.

The United Nation’s Environment Programme’s (UNEP’s) Small Island Developing States Foresight Report, released on June 5, estimates that the 52 island nations, home to over 62 million people, emit less than one per cent of global greenhouse gases, yet they suffer disproportionately from climate change. For instance, coral reefs, the frontline for adaptation, are already severely impacted by rising sea surface temperatures along these nations. The global net loss of the coral reef cover—around 34 million hectares over two decades—will cost the international economy an estimated US $11.9 trillion, with Small Island Developing States especially impacted by the loss. It is estimated that each hectare (2.5 acres) of the world's coral reefs provided services worth US $350,000 a year.

In the Caribbean, for example, up to 100 per cent of coral reefs in some areas have been affected by bleaching due to thermal stress linked to global warming. Climate threats are projected to push the proportion of reefs at risk in the Caribbean to 90 per cent by 2030 and up to 100 per cent by 2050. The report warns that the magnitude and frequency of climate-related hazards will increase in small islands. “This will lead to disproportionate and compounded climate change impacts, which will adversely affect multiple sectors—from tourism, agriculture and fisheries to energy, freshwater, health and infrastructure, unless ocean-based green economy approaches and policy options are put into action,” said the UNEP report.

However, the report also suggests that small island nations can transition to an inclusive green economy and ensure a sustainable prosperous future by taking advantage of opportunities in areas such as renewable energy and sustainable exploration of unexploited resources. It recommended that these countries should develop an ocean-based green economy and lead the world in the development of inclusive indicators that go beyond Gross Domestic Product to include natural resources.