A developing country delegate received message that there has been no progress on long term finance. 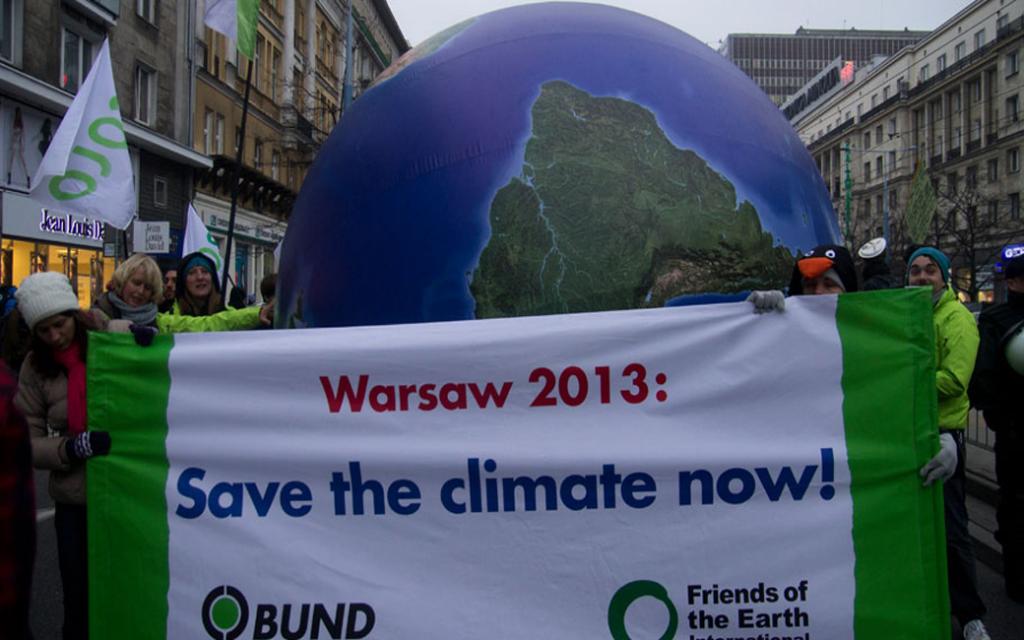 A developing country delegate received message that there has been no progress on long term finance. If there is no finance, there is no process, the delegate said.

Parties decided to remove finance, technology transfer and capacity building from the 2d Venezuela had proposed earlier (see update of 1.23 AM).

Parties crunched it to 'provide support' only (for preparation of commitments). Developing countries though made it clear that it was a big step for them to agree on commitments rather than actions.

It was agreed that reference to Under the Convention would be in the chapeau and not in the paragraph.

Even though countries said they have reservations, this is the best solution they could arrive at on Paragraph 2d. They will make their reservations public at the ADP plenary.

Venezuela takes charge and leads on providing text for Paragraph 2d. It will read: urges and requests developed country parties, the operating entities of the financial mechanism and any other organization in a position to do so to provide support for the related activities in Paragraphs 2b and 2c as early as 2014.

2.35 AM
No end to this. Parties reiterate their points before the co-chairs can leave. Venezuela says developing countries will leave Warsaw with nothing: no movement on loss and damage; no work programme on finance; "How do we justify to our governments that we are making progress"? "This will only be a European Union winning". Venezuela urges co-chairs to let Parties discuss. Co-chair says time is a constraint; Parties can do a huddle and report to the co-chairs in half an hour. Now Guatemala says Parties must stay in the room. But meeting adjourned. Next meeting will be the ADP Plenary. Supposed to begin at 5 am.

2.25 AM
Taking note of the discussions, co-chair proposes going back to the drawing board and meeting again at 5 AM. Venezuela insists on continuing discussions. Co-chair sticks to his guns.

2.03 AM
European Union reminds everyone that ADP is trying to arrive at a workplan and not an agreement. So move on.

1.56 AM
Ecuador proposes another paragraph 2d. Cochair says don't ask for the impossible. Switzerland seeks clarity on the structure of discussions since there is still so much more to be discussed.

1.30 AM
Seems Articles 2 and 4 are brought back by the proposal to add Paragraph 2d.

1.23 AM
Venezuela suggests adding Paragraph 2d. It's not there in the co-chair's text now. The text proposed is: The domestic preparation of developing countries for the intended nationally determined commitments referred to in Paragraph 2b for the preparation of information requested in 2c above and the implementation of such commit shall depend on the provision of finance, technology transfer and capacity building by the developed countries in accordance with the convention with the view to achieving its objectives.

1.10 AM
Compromise: Looks like bracketed text traded off against Articles 4 and 2, as proposed earlier. Colombia opposing deleting of 'ultimate objective of the Convention from Paragraph 2b. Says it was not present at the huddle. India says they were conscious of the fact that not everyone was there. "The huddle gave a broad sense of direction. It did not aim to achieve consensus," says India.

12.42 AM
India sums up the huddle: We managed to discuss paragraphs 2b and 2c. We tried to see whether there is a landing area. This is not an agreed text since there are concerns. We propose Paragraph 2b to read as follows (for background, refer to the 10.38 PM post in this thread):

2b: To invite all parties to initiate or intensify domestic preparations for their intended nationally determined commitments in the context of adopting a Protocol, another legal instrument or an agreed outcome with legal force under the Convention applicable to all Parties and to communicate them well in advance of the 21st session of the Conference of Parties [(by the first quarter of 2015 by those parties in a position to do so)] in a manner that facilitates clarity, transparency and understanding of the intended commitments.

2c: To request the Ad hoc Working Group on Durban Platform for Enhanced Action to identify by the 20th session of the Conference of the Parties, the information that Parties will provide when putting forward their commitments referred to in paragraph 2(b) above.

11.44 PM
More news: "Certain countries" don't want any reference to the Convention. This one is not tough to guess.

11.25 PM
News from the huddle: Parties may agree to change communicating commitments from 'at its first session in 2014' (the current text, Paragraph 2b) to 2015 and allow flexibility by saying whoever is in a position to. But still discussing. No easy solutions.

10.38 PM
Huddle still on. The huddle is to discuss BASIC's and others' suggestions. South Africa, on behalf of BASIC, proposed text to be added to Paragraph 2b of the co-chairs draft text.

Paragraph 2b as it is now:

"To invite all Parties to initiate or intensify domestic preparations for their intended nationally determined commitments towards achieving the ultimate objective of the Convention and to communicate them well in advance of the twenty-first session of the Conference of the Parties in a manner that facilitates the clarity, transparency and understanding of the intended commitments;"

Including Article 2 will ensure enshrining the objective of the Convention, which is to achieve ecosystems to adapt naturally to climate change, ensure food production is not threatened and to enable economic development to proceed in a sustainable manner

Including Article 4 will ensure that the differentiation between developed and developing countries remains, and that developing countries get financial and technical support to implement their commitments since poverty eradication is their first and overriding priority.

9.22 PM
Huddle still on. The room is abuzz with camera clicks and people walking about. What will it be? Will Parties be able to agree on differentiation?

8.45 PM
No conclusion on differentiation. Co-chair breaks session for half an hour for Parties to talk to each other.

8.28 PM
BASIC (Brazil, South Africa, India, China) propose Article 4 of the Convention (differentiation) to be added to text on post-2020 deal. Gets support from LMDC. US, Switzerland, ILAC, AOSIS say no. According to US, under the convention does not mean the provisions of the convention will apply.

8.07 PM
Even after the co-chair's request, parties continue to make general interventions.

7.51 PM
Resounding applause after Venezuela's intervention. Formally tells the co-chairs about EU climate commissioner Connie Hedegaard reaching out to the media to say LMDC (Like Minded Developing Countries) are not letting negotitations progress and asks of the co-chair: "Will you pus us in a Copenhagen situation?"

7.33 PM
Malaysia sums up the negotiations so far well. Says: "The finance text came out today. There is no sense of urgency or ambition in it. Adaptation is behind. Loss and Damage is behind. On what basis will developing countries make their post 2020-pledges? On what basis will we even begin thinking of pledges with no means for implementation?"

7.18 PM
Countries don't agree on timeline: When do Parties communicate their commitments? Well before COP 21, as the text suggests, or in the first half of 2014, as proposed in the chair's earlier text versions.

7.00 PM
ADP session recovenes. As Parties make their interventions on the text, there is also a lot of movement in the room. It's not a huddle yet, but there is some serious discussion going on among the LMDC (Like Minded Developing Countries).

6.05 PM
Fight over equity in the open: Equity fight: “She has done it once. We won’t let her damage the negotiations again,” Minister Claudia Salerno, vice minister and head of Venezuela delegation, told a press gathering around the café area 15 minutes ago. She was referring to Connie Hedegaard who accused the LMDC (Like Minded Developing Countries) of being against equity. “It is incredible for her to accuse LMDC of being against equity. This Group has been championing equity against the onslaught against equity by many of the developed countries,” Salerno said. Reacting strongly to Connie’s statement to media, she added: “We may have differences of opinions in these negotiations, but it is totally unacceptable that the head of the EU tries to conduct negotiations by starting a blame game through media and pointing fingers at our group. If you have differences, bring it up at the negotiations. By going to the media and attacking a negotiating partner, the EU chief is responsible for damaging seriously the atmosphere of confidence and trust in this process. We are forced to answer her accusation to the media because of the serious allegations she has made. If this process is damaged on this last day because of this incredible outburst by Mrs. Connie, she has to take the responsibility.”

4.00 PM
Most meetings behind closed doors. ADP yet to reconvene.

2.28 PM
Rumour: NGOs that walked out of COP19 are back. Press release issued to say they are not.

2.20 PM
Overheard US negotiator in the corridor: ADP Plenary? That's a l-o-n-g way off.

2.15 PM
Murmur in the corridor: Stocktaking on, behind closed doors. NGOs angry. No transparency. Next ADP meeting at 3.30PM. Those not allowed into the earlier session already queueing up.

1.10 PM
Ministerial consultations on finance going on behind closed doors.

No progress on loss and damage. Briefing expected soon.

12.00 PM
Deep dis-satisfaction over new ADP text. It's a war of words. Today is supposed to be the last day. Will ADP be able to arrive at a decision? Looks unlikely.

4.00 AM
Contact group on finance concluded. Heavily bracketed text on its way to the COP. US plays spoilsport. Major issues of disagreement: Timeline on finance, Capitalisation of US $100 billion, and Who will contribute to the fund.