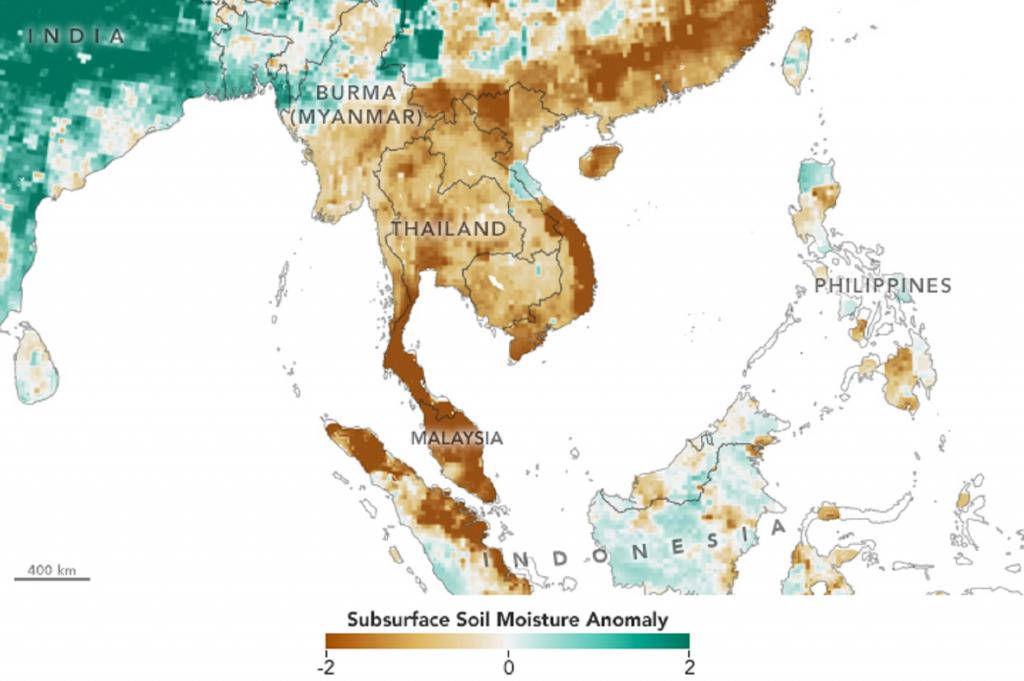 A map released by the United States National Aeronautics and Space Administration's (NASA) Earth Observatory on February 15, 2020 showed below-normal subsurface soil moisture in large parts of southeast Asia. Lower Mekong Basin countries, including Laos, Cambodia and Vietnam were all affected by a delayed and short monsoon, according to the Mekong River Commission. But Thailand was the worst hit. An El Nino event also led to increased temperatures and high evapotranspiration in the region.

The drought has exhausted the southeast Asian country's major reservoirs, which held less than half the water they could. River water levels were so low that salt water from seas entered them, affecting drinking water supplies. Low-lying areas have been the worst-affected by salt water intrusion.

“This is one of the signs showing the drought situation in low-lying areas in Thailand this year is worse than before,” said Senaka Basnayake, director of Climate Resilience at the Asian Disaster Preparedness Center in Thailand.

The drought has pressured Thailand’s economy, which employs over 11 million people in farming and crop production. The country, one of the world’s leading sugar exporters, was expected to produce 30 per cent less sugar than previous years.

Other Lower Mekong Basin countries were also bracing for the worst. The Mekong Delta in southwest Vietnam received about 8 per cent less precipitation last monsoon, according to the country's agriculture ministry. The Earth Observatory reported that saltwater intrusion has started damaging rice fields in Trá Vinh. More than 10,000 hectares of winter-spring rice have been affected by water shortage in the province. If such conditions prevailed, about 94,000 hectares could be affected.