Why did Antarctic Larsen C ice shelf break in 2017? NASA has an answer

Melange, a collection of snow, icebergs and sea ice, has properties similar to glue: It fills cracks or gaps in ice shelves. As it grows thinner, cracks in ice shelves widen 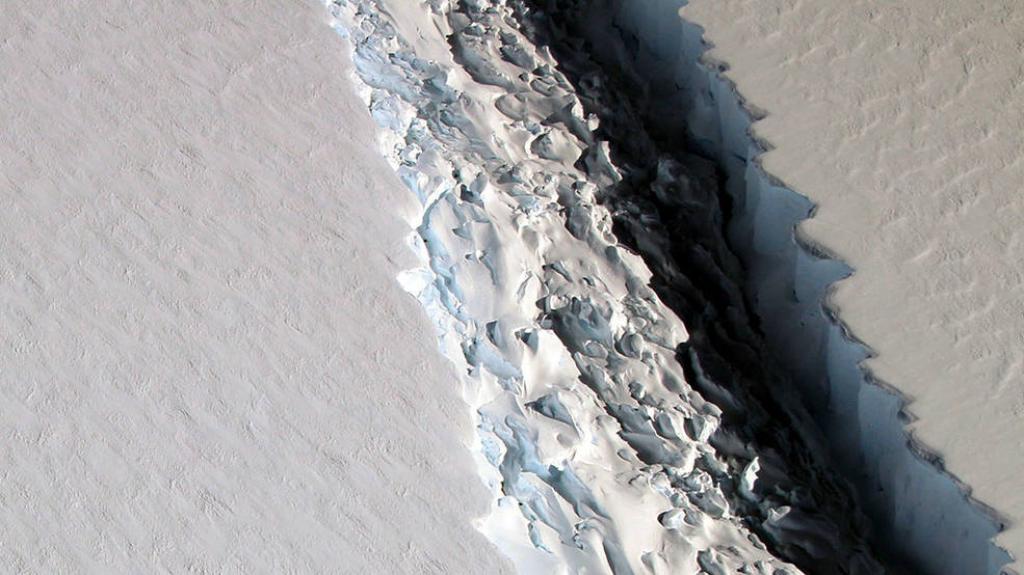 The photo shows a rift that, within a few months, widened even farther and released a Delaware-size iceberg from Antarctica’s Larsen C ice shelf in 2017. Photo: NASA

When an iceberg, more than nine times the size of Mumbai in India, split off from Antarctica’s Larsen C ice shelf July 10-12, 2017, the scientific fraternity dived in to look for answers. Researchers had attributed the phenomenal event, not to climate change, but to ice-shelf dynamics.

Years later, a new study by United States National Aeronautics and Space Administration’s Jet Propulsion Laboratory in Southern California and the University of California, Irvine, has discovered an ice process that may have caused the split. It was published in the Proceedings of the National Academy of Sciences (PNAS).

The answer is in the ice-shelf behaviour — but peddled by the massive changes to Antarctic that can only be attributed to global warming.

The glue that holds cracks together

The study found that mélange — a collection of windblown snow, broken icebergs and sea ice lodged in and around ice shelves and which is critical in holding ice shelves together — may cause the shelves to break up even faster due to rising air temperatures. When this layer of melange, which helps the ice stick to the shelf, gets thinner, is when the cracks in the ice shelf grow bigger.

Ice shelves are floating extension of land ice and are firmly attached to the land. Ice mélange commonly occurs when ice breaks off the edge of a glacier.

Global warming contributes to weakening ice shelves as warmer ocean water erodes the underbelly of the ice shelves, while rising air temperatures weaken them from above. But this theory did not sit well with the Larsen C ice shelf split, because the ice had been frozen solid for months.

So to find answers, NASA scientists focused on the melange, which has natural properties similar to glue: It fills cracks or gaps and sticks to ice and rock. When it accumulates in a crack in an ice shelf, it creates a layer — thin but as hard as the surrounding ice — that holds the crack together.

The gluey melange helped the ice stick to the rock walls around the ice shelves.

The scientists assessed the rifts in the ice shelf that were most vulnerable to breaking. They selected 11 rifts for their analysis.

Not the glacial ice, but thinning melange

The researchers found that only when the melange grew thinner that the rifts in the ice shelves grew larger. The thickness of the ice shelf, in this case, was not tampered with.

This meant that the melting of glacial ice alone is not enough to explain why the shelves are breaking up more rapidly, as has been the case in the Antarctic.

So this is what happened in Larsen C: The rifts in the ice shelf widened more quickly, accelerating from an average rate of 249-367 feet (76-112 meters) per year, when the melange was thinned without altering the ice shelf.

When the narrow layers of mélange thinned to about 30 to 50 feet (about 10 or 15 meters), they completely lost their ability to hold rifts together. The rifts could rapidly gape open and large icebergs break loose, just as happened on Larsen C.

“We always suspected that this mélange played a key role, but until recently we did not have good observations of its characteristics,” said Eric Rignot, professor at UC Irvine and co-author of the PNAS study.

The layers of mélange melt by coming in contact with the ocean water below, according to the study. So this process continues through the year, and the melange becomes too thin to keep holding the ice shelf together.

This is why Larsen C split, despite having frozen ice for months. “The process may explain why ice shelves in the Antarctic peninsula started to break up decades before meltwater began to accumulate on their surface,” Rignot said.