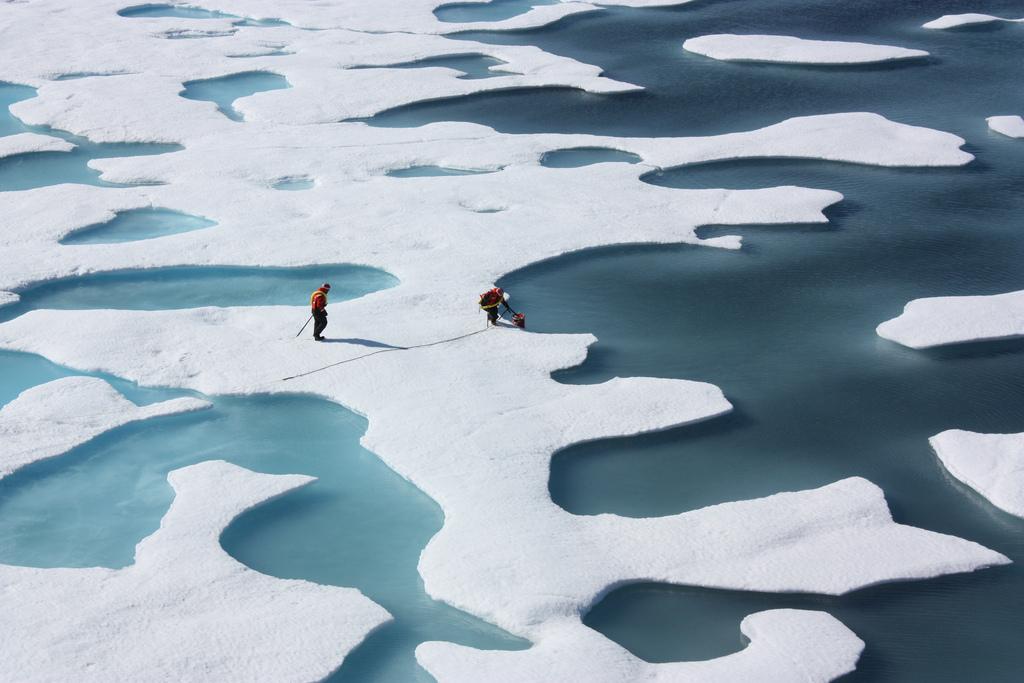 These record low sea ice levels have been associated with exceptionally high temperatures for the Arctic region. Credit: NASA / Flicker

For the Arctic, like the globe as a whole, 2016 has been exceptionally warm. For much of the year, Arctic temperatures have been much higher than normal, and sea ice concentrations have been at record low levels.

The Arctic’s seasonal cycle means that the lowest sea ice concentrations occur in September each year. But while September 2012 had less ice than September 2016, this year the ice coverage has not increased as expected as we moved into the northern winter. As a result, since late October, Arctic sea ice extent has been at record low levels for the time of year. These record low sea ice levels have been associated with exceptionally high temperatures for the Arctic region. November and December (so far) have seen record warm temperatures. At the same time Siberia, and very recently North America, have experienced conditions that are slightly cooler than normal. Temperatures have been far above normal over vast areas of the Arctic this November and December. Geert Jan van Oldenborgh/KNMI/ERA-Interim, Author provided

Extreme Arctic warmth and low ice coverage affect the migration patterns of marine mammals and have been linked with mass starvation and deaths among reindeer, as well as affecting polar bear habitats.

Given these severe ecological impacts and the potential influence of the Arctic on the climates of North America and Europe, it is important that we try to understand whether and how human-induced climate change has played a role in this event.

Our World Weather Attribution group, led by Climate Central and including researchers at the University of Melbourne, the University of Oxford and the Dutch Meteorological Service (KNMI), used three different methods to assess the role of the human climate influence on record Arctic warmth over November and December.

We used forecast temperatures and heat persistence models to predict what will happen for the rest of December. But even with 10 days still to go, it is clear that November-December 2016 will certainly be record-breakingly warm for the Arctic.

Next, I investigated whether human-caused climate change has altered the likelihood of extremely warm Arctic temperatures, using state-of-the-art climate models. By comparing climate model simulations that include human influences, such as increased greenhouse gas concentrations, with ones without these human effects, we can estimate the role of climate change in this event.

This technique is similar to that used in previous analyses of Australian record heat and the sea temperatures associated with the Great Barrier Reef coral bleaching event.

The November-December temperatures of 2016 are record-breaking but will be commonplace in a few decades’ time. Andrew King, Author provided

To put it simply, the record November-December temperatures in the Arctic do not happen in the simulations that leave out human-driven climate factors. In fact, even with human effects included, the models suggest that this Arctic hot spell is a 1-in-200-year event. So this is a freak event even by the standards of today’s world, which humans have warmed by roughly 1℃ on average since pre-industrial times.

But in the future, as we continue to emit greenhouse gases and further warm the planet, events like this won’t be freaks any more. If we do not reduce our greenhouse gas emissions, we estimate that by the late 2040s this event will occur on average once every two years.

The group at KNMI used observational data (not a straightforward task in an area where very few observations are taken) to examine whether the probability of extreme warmth in the Arctic has changed over the past 100 years. To do this, temperatures slightly further south of the North Pole were incorporated into the analysis (to make up for the lack of data around the North Pole), and these indicated that the current Arctic heat is unprecedented in more than a century.

The Oxford group used the very large ensemble of Weather@Home climate model simulations to compare Arctic heat like 2016 in the world of today with a year like 2016 without human influences. They also found a substantial human influence in this event. Santa struggles with the heat. Climate change is warming the North Pole and increasing the chance of extreme warm events. Climate Central

All of our analysis points the finger at human-induced climate change for this event. Without it, Arctic warmth like this is extremely unlikely to occur. And while it’s still an extreme event in today’s climate, in the future it won’t be that unusual, unless we drastically curtail our greenhouse gas emissions.

As we have already seen, the consequences of more frequent extreme warmth in the future could be devastating for the animals and other species that call the Arctic home.

You can find more details on all the analysis techniques here. Each of the methods used has been peer-reviewed, although as with the Great Barrier Reef bleaching study, we will submit a research manuscript for peer review and publication in 2017.