Has India taken heed of warning from previous cloudburst incidents? 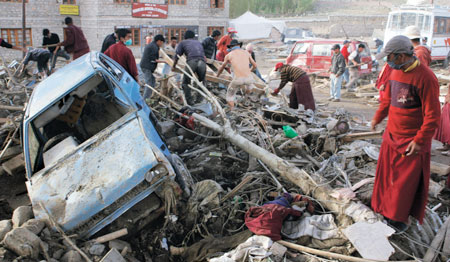 A cloudburst is different from rain only in the amount of water that pours down on the earth. The India Meteorological Department (IMD) labels rainfall over 100 mm per hour as cloudburst. Usually small areas – anywhere between 20-80 square kilometres are affected.

Most places in India have to deal with around 20 mm of rain in a day during the monsoon. Uttarakhand, the mountain state presently reeling from extreme devastation caused by floods, received 220 mm rainfall on June 16. Rainfall of such intensity can lead to flash floods within a few minutes. This kind of intense rainfall led to the Leh cloudburst in August 2010. This was not the only incident. Chamoli district in the Garhwal region of Himachal Pradesh, also badly affected by floods, experienced a cloudburst in 1992.

The geography of a place makes it vulnerable to cloudbursts. The National Centre for Medium Range Weather Forecasting under the Ministry of Earth Sciences (MoES) tried to examine the reason for the Leh cloudburst. Analysis suggests that the cloudburst evolved in a deep humid layer of air flow from north-west of Leh capped by cold and dry flow from the east and south-east.  A cloud cluster entered the area from Nepal and tipped the balance and triggered the downpour. The place received only 40 mm of rainfall in three hours – far less than what would be considered a cloudburst by IMD.

This suggests that setting the benchmark for naming an episode of rainfall as a cloudburst at 100mm of rainfall in an hour is faulty. The Danish Meteorological Institute, for example, considers cloudburst to be more than 15 mm of precipitation in the course of 30 minutes.

Denmark is also more prepared to deal with cloudburst even though the country suffers one only once every century. The country has a cloudburst management plan as part of the Copenhagen climate adaptation plan. Some of the measures suggested under the plan include steps to separate stormwater from wastewater, and diverting drain water to the sea through roads, canals or urban waterways, and subterranean tunnels. It was estimated in 2012 when the plan was developed that the constructions costs are likely be around 3.8 billion Danish Krones by 2033.
For Uttarakhand where even the sewage runs down the mountainside, setting up a system to remove water safely would require much more money and effort.

Simulation of a Himalayan cloudburst event