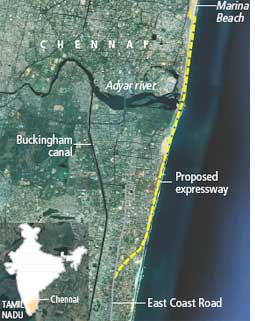 people living in the fishing villages along the Chennai coast have used the Right to Information (rti) Act to find out the real intent behind inducements offered to them by the government. They discovered the state highway authorities plan to build a 9.7 km elevated road along the beach by ploughing through 16 villages that fall in the way.

K Saravanan of Urulucott village was mystified when the city municipality offered to install streetlights on a dirt road the villagers use. He then happened to read about the flyover plan in the newspapers and sought the feasibility report for the project. The response from the highways department showed that his village was on the route of the elevated expressway. He surmised the offer to install the streetlights was a way to circumvent coastal regulations to obtain clearances for the flyover.Coastal regulations allow road development near the beach only if there is an existing road; putting streetlights and paving it would have made it a regular road fit for upgrading.

A fisher leader of Nochikuppam village, J Kosumani, found out about the proposed road by seeking information from the housing board. The road will connect the lighthouse at Marina beach with the East Coast Road and Puducherry (see map). The board admitted to changes in plan to provide pucca houses to fishers living in shanties on the Marina beach because of the proposed expressway. Kosumani said in 2007, residents of Sreenivasapuram village were asked to vacate their homes on the pretext that a tsunami may hit the area. Whatever excuse they give this time, we are not going to budge, said Kosumani.

A highway department official said there was no reason for people to get agitated as the plan is still at the feasibility stage. They should wait for public consultations, he said. The detailed project report for the coastal expressway is likely to be ready by April 2010.

Private consultants Wilbur Smith in their feasibility report have said the expressway will decongest the existing beach road and reduce traffic congestion and air pollution. K P Subramanium, a transportation engineer, said this was not true as elevated roads flanked by buildings have canyon-like effect that intensify air and noise pollution. What the city needs is better public transport, exclusive bus lanes and infrastructure for pedestrians and cyclists, he said. Only cars and two wheelers would be allowed on the expressway.

A Srivatsan, an architect and town planner said the road alignment has been changed once to save statues of political leaders on the Marina beach but that the authorities were not bothered about displacing people or ruining the environment. He pointed out the expressway will disturb the Adyar creek that plays an important role in regulating tidal action of the sea. It will also affect Olive Ridley turtles that nest on the Chennai coast.

The state authorities also plan to build a number of elevated roads along the citys waterways, including Buckingham canal later.