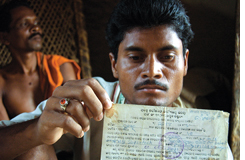 Tribals in Orissa's Balangir district say they have been deceived. They allege an Agra-based company has duped them and taken away 200 acres (around 80 hectares) of their fertile land to plant jatropha, for biofuel production.

"Taj Gases Ltd has cheated us and has taken most of our land. The company established an empire before we realised anything and now it has become the owner of our lands," says 70-year-old Madan Kand of Ghumer village in Balangir. There are nine people like Kand who have lost their land to the company. In all, Kand says, 37.46 acres (around 15 ha) was made over to the company.

According to Kand, a person called Sushil Pradhan had come to their village in October 2005 and addressed a gathering of villagers telling them "how to become rich". They were introduced to Mahesh Kumar Dixit, an official of the company, who told them he would take the villagers' land for three years on lease and pay Rs 7,000 per acre in return. He promised them work as labourers on the land, where they would draw around Rs 2,000 as monthly salary, says Kand. "The company said it would plant jatropha and that after three years, we would get a share of the bonus," says Shyam Sundar Sahu who, like Kand, has lost two acres. "We were also promised that the villagers would own the enterprise," adds Kand.

Forget jatropha, biofuel or joint ownership. Villagers allege that the company also robbed them of their mahul trees, which is an alternate source of livelihood for the tribals. "They damaged our mahul trees. We heard from a dalal that the company was planning to lease out mahul flowers to him for Rs 500 per tree," says Kand who earns Rs 2,500 a year from his mahul tree. Villagers also earned additional income through other trees such as rengal and char.

Seeing the damage and the "false promises of the company", the villagers decided to revoke the land deeds. Luckily, the district collector supports them and has ordered investigations into the case. Meanwhile, villagers are resolute and want an end to the "organised land grabbing in the name of biofuel".