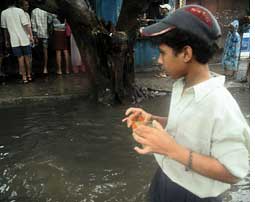 The Municipal Corporation of Greater Mumbai (mcgm), in its annual water samples testing report, has said 10 samples of drinking water collected from posh Mumbai suburbs such as Colaba, Byculla and Dahisar were loaded with E coli. The bacterium causes gastroenteritis, diarrhoea and severe kidney damage. Another 80 samples were highly contaminated with coliform bacteria and were unfit for drinking, said the report. According to the who, the level of coliform bacteria in drinking water should not be exceed 10 per 100 ml, whereas E coli should be absent.

A blame game has already begun. mcgm contends that Mumbai's water supply pipelines are almost 100 years old and leaky. Hence, during the rainy season, sewage seeps through the pipelines and contaminates drinking water with E coli. It also blames the residents' societies for not cleaning water tanks regularly. Health experts, however, differ. "Every year during monsoon, I receive a large number of patients suffering from gastroenteric problems linked chiefly to contaminated water...But residents are helpless as they cannot sue the mcgm. The Indian government has only recommended drinking water standards but not made them legally binding," says a physician based in Gorai.

In a separate incident, over 700 kg of dead fish were found floating in the Bhatsa Lake on July 10. The lake, located in Thane district, is a major source of drinking water to Mumbai.

Initially the authorities blamed it on local residents for poisoning the lake water to catch fish. But later tests by Mumbai-based Central Institute of Fisheries Education showed high levels of oil and grease effluents in the water--89 mg per litre (mg/l). The permissible limit of such contaminants in water sources is up to 10 mg/l. Local residents say the waste oil has been released by Shahpur-based Liberty Oil Mills Ltd.

mcgm has demanded action against the company and the Maharashtra Pollution Control Board is investigating the matter.