Controversy over water tariffs in Mumbai

the Municipal Corporation of Greater Mumbai (mcgm), on December 7, cleared a proposal to introduce differential water tariffs in the city. Under the system, water bills will be calculated on the actual amount of water consumed per person per day. The corporation is also planning to introduce prepaid water meters in unauthorized slums, that have come up after 1995 besides plugging leakages and replacing old water pipelines in the city--as a part of the Sujal Mumbai project, a water reforms project aimed at round-the-clock water supply for residents. 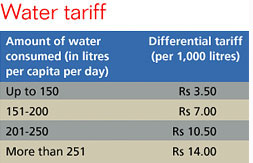 mcgm's measures have, however, been criticized. Though activists have welcomed the concept of differential tariffs, they are sceptical about its implementation. "Water meters are provided for every building in Mumbai, and not at the household level. mcgm says if a person uses more than 150 litres of water per day, additional charges will be levied (see table: Water tariff). In that case, a family of two may end up paying the same as a family of eight, in case the total quota of that particular building exceeds the limit," says Afsar H Jafri of Mumbai-based Focus on Global South-India, an ngo. Also over 50 per cent water meters in Mumbai are at present dysfunctional.

Under the prepaid water meter plan, slum dwellers will be allowed water consumption based on payment in advance. Residents will have to buy 'water credits', depending on their requirement, which will be recorded in their water cards. They will be charged Rs 2.25 per 1,000 litres. Activists say the provision is unethical. A report by the Coalition against Water Privatization, an international body, says prepaid meters introduced in South Africa have led to many health problems.

"Prepaid meters will deny water to those who cannot afford to buy recharge coupons... (this could be) ... a prelude to privatization of water supply and distribution in Mumbai," says a statement issued by Mumbai Paani and Paani Hakk Abhiyan, a coalition of several Mumbai-based organizations protecting water rights. For now though, the dispute has been put off as mcgm's standing committee has postponed a decision.

A ctivists also allege that the leakage plugging and replacing pipelines projects are paving the way for water privatization. "The work on checking leakages and replacing pipelines has already been contracted out to six firms for six zones of Mumbai. This alone is costing corporation Rs 120 crore per annum. Why can't this money be saved by strengthening the corporation's leakage department?" questions Jafri.