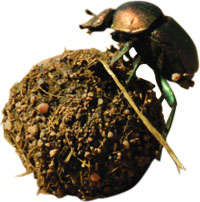 CATTLE farming for meat and milk is one of the biggest sources of man-made greenhouse emissions. Methane produced by cattle gets released into the atmosphere. However, amount of methane loaded into the atmosphere from dung could have been much higher but for the humble dung beetles, which are declining in numbers across the globe. This is the finding of a study published in PLoS One on August 7.

For the study, scientists from the University of Helsinki, Finland, compared gas emissions from cow pats without beetles with those to which beetles were added. They enclosed the pats with buckets and drew samples of the accumulating gases. Those gases were then quantified by a standard laboratory procedure gas chromatography. It was found that dung beetles reduce methane emissions from dung pats by 5 times.

“As we only measured the end result, that is, gas emissions, the exact mechanisms by which the beetles were reducing methane was not known. However, we can be fairly certain that they relate to the aerating effect of beetles on the pats,” says lead author of the study, Tomas Roslin, who is a scientist with the department of agriculture at the University of Helsinki.

The researchers are concerned that dung beetle population is declining across the globe due to changing agricultural practices, like keeping cattle indoors, and widespread use of anthelmenthics to control worms in cattle.