Is Span motel's punishment commensurate with its crime? Experts wonder... 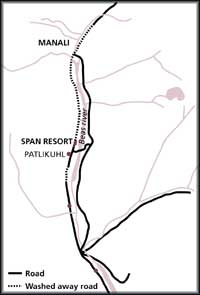 on march 14, 2002, the Supreme Court (sc) slapped an "exemplary damage" of Rs 10 lakh on Span Motels Private Limited (smpl), a resort in which former Union environment minister Kamal Nath's wife is a major shareholder, for causing environmental degradation by changing the course of Beas river. The judgement was set to serve as "a deterrent for others not to cause pollution in any manner".

The Himachal Pradesh (hp) government was also pulled up for "patent breach of trust" by leasing ecologically fragile land to the motel, which is located in Kullu Manali. Significantly, the apex court applied the 'polluter pays principle' to the case with the liability for harm to compensate not only the victims but also the cost of rectifying the damage done to the environment and reversing the affected ecology.

The polluter pays principle is adopted as an underlying economic code for environmental policy. According to it the polluters are liable to take steps to prevent in advance, or at least reduce, any inconveniences arising from their activity. They are also responsible for any damage they cause to the environment. The principle fixes the accountability of industries for the pollution they generate. It emphasises the fact that the costs of measures to prevent, control and reduce damage resulting from pollution should be borne by the polluter.

Reacting to the order, noted lawyer Rajeev Dhavan says that the principle does not mean one can pay for pollution and purchase the environment. "The order is very mild. It should have aimed at complete cessation of such activity in the region," he avers. Ravi Agarwal, director of New Delhi-based non-governmental organisation (ngo) Srishti, says: "The polluter pays only after the act and accepts the damage as a fait accompli. At best, it is a one-time token fine that the sc has charged. It has the danger of merely becoming a cost, at the same time legitimising the damage."

In this regard, the division bench of the sc, comprising Justice M B Shah and Justice Doraiswamy Raju, had noted that the fine was only temporary and the actual quantum would be fixed when the damages are assessed. But experts contend that evaluating environmental damage is a difficult exercise. It depends on what one construes to be destruction and the assumptions that are made thereof.

In February 1996, reports revealed that smpl had turned Beas river's course by creating a channel and diverting it at least one kilometre downstream (see map: Tinkering with nature). The motel had got a prior approval from the Union environment ministry on November 24, 1993, when Kamal Nath was heading it. On December 13, 1996, the sc, acting on a public interest litigation suit, quashed and cancelled the deed of 2.22 hectares of forestland leased out to the motel as "by constructing walls and bunds on the riverbanks and on the riverbed, it had interfered with the natural flow of the river" (see Down To Earth, Vol 5, No 18, February 15, 1997).

The court had directed the hp government to take over the area and restore it to its original natural condition. The National Environment and Engineering Research Institute (neeri) was asked to inspect the area and give an assessment of the cost likely to be incurred for reversing the damage. neeri put the cost of restoring the ecology, affected by the motel and other commercial ventures, at Rs 9.13 crore.

A notice issued by the apex court to the motel on May 12, 2000, stated: "Pollution is a civil wrong. By its very nature, it is a tort committed against the community as a whole. A person who is guilty of causing pollution has to, therefore, pay damages for restoration of the environment and ecology."

However, in its recent order, the court said that it was limiting the amount as the company had promised to bear a fair share of the cost of ecological restoration, which would be "quite separate and apart from their liability for the exemplary damages".

According to the court, the question of apportionment of the cost of restoration of ecology and pollution fine would be considered by it in further hearings. But Agarwal points out, "Fines would merely change the bottomline and shareholder surplus. Wouldn't they?" A pertinent question indeed.