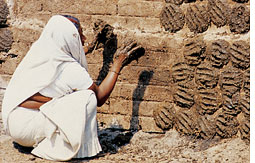 The study by Jadavpur University's School of Environmental Studies says the region's groundwater is contaminated with the cancer-causing chemical which gets into paddy through contaminated water. Cattle that feed on contaminated paddy husk and water produce dung that is likely to contain arsenic.

Researchers say while the dung is burnt in kitchen, as much as 25 per cent of the arsenic in fumes could be absorbed by the respiratory tract of people and lead to diseases such as persistent cough and chronic bronchitis. The arsenic particles in the air might also settle on food and water and contaminate it. The accepted range of arsenic in air according to the guidelines of who is 0.4-30 nanogrammes per cubic metre. The study shows arsenic concentration in air in the area is 250-420 nanogrammes per cubic metre.

However, some scientists say the threat is not that serious. "This might not directly affect people because most of the ovens are placed out in the open. There are several factors, like the size of the particles emitted, that need to be considered to assess the impact," says Pradeep Sikdar of the Indian Institute of Social Welfare and Business Management, Kolkata.

But researchers from Jadavpur disagree. "In West Bengal, for example, the dung cakes are burnt indoors and the fumes spread inside. Many houses just have a room and a kitchen with no ventilation," says Dipankar Chakraborti, the lead researcher of the paper published in Environmental Monitoring (Vol 9, No 10).

The team studied water, soil, straw and cow urine and the fumes and ash emitted from the ovens using cow dung from the North 24 Parganas and Nadia districts in West Bengal. Chakraborti says many people in the region, especially women, suffer from lung cancer. Drinking water contaminated with arsenic regularly can cause bladder, liver and kidney cancer. Chakraborti feels the government needs to act. "We have approached the authorities to subsidize chimneys and make them mandatory in villages."

The risk could also be passed on to the next generation. A recent study by the department of biological engineering at the Massachusetts Institute of Technology, usa, shows that prenatal and childhood exposure to arsenic can lead to an increase in the mortality rates. The study was conducted in Thailand which reported the first case of arsenicosis in 1987.