Creation of Greater Bangalore will strain the city's resources 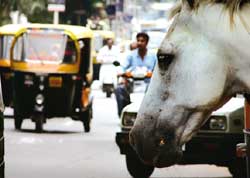 karnataka's decade-old plan for creating a Greater Bangalore entity has finally got a fillip with the state government's recent go-ahead for the merger of seven city municipal councils (cmcs), one town municipal council (tmc) and over 100 villages within the Bangalore metropolitan area under the Bangalore Mahanagara Palike (bmp) limits.

This will lead to an addition of about 696 sq km to the existing bmp area. The state government claims that this merger will help the balanced development of this area and also decrease bureaucratic delays in sanctioning infrastructure projects.

The merger proposal is imminent. Yet, its details are still out of the public domain. "The decision to form Greater Bangalore is final, but a number of issues need to be sorted out for which various committees are being formed.I can divulge more information about the exact plan only after a government resolution is issued," says a senior official with the urban development department of the Karnataka government.

One thing is clear though -- the bmp councillors' elections that are due in November 2006 will be delayed indefinitely. These elections, claim sources, can now take place only after the formal creation of Greater Bangalore, which may take months. The state government has not specified any time limit for the elections.

Hence, after November 2006, the 100 elected councillors will be out of a job, literally. In the interregnum, the city will be governed by an administrator, free from political interventions claim media reports. State government officials refuse to specify who that 'administrator' will be -- a political figure, a bureaucrat, an elected representative, or an industry bigwig.
Even the commissioners of cmcs, proposed to be merged with Bangalore, are clueless. "It is a good idea to merge these seven cmcs, but I don't have any details of the proposed plan. The urban development department should have those details," says Rama Krishna, commissioner, Bommanahalli cmc. The other six cmc s to be merged are Byatarayanapura, Yelahanka, Dasarahalli, Mahadevapura R R Nagar, K R Puram; and the Kengeri tmc.

Bangalore's mayor Mumtaz Begum has already shown her displeasure towards the Greater Bangalore plan, which she claims will be difficult to implement "as ward-level issues continue to affect the Bangalore Mahanagara Palike".

Post-merger, the number of wards in bmp is expected to go up to 136 (or a maximum of 150) from the existing 100-odd. Experts allege that the formation of Greater Bangalore is against the principle of decentralisation. "At present each cmc/tmc has about 30-35 elected representatives, which means a total of about 250 representatives. bmp, in contrast, has 100 councillors; and the proposed Greater Bangalore will have a total of 150 councillors. This means 250 elected representatives of seven cmcs and one tmc will be squeezed into 50. This does not make any sense. Isn't it better to decentralise urban governance?" questions Gururaja Budhya, secretary of the Bangalore-based Urban Research Centre.

Formation of Greater Bangalore will not only lead to urban explosion, but also put under stress already scarce resources, warn environmentalists.

The merger will not help in efficient service delivery, as the Bangalore Water Supply and Sewerage Board (bwwsb) is finding it increasingly difficult to meet the existing water supply and sewerage demands of Bangalore city (see 'Meltdown' , Down To Earth, February 15, 2006).

Also, the much-touted Rs 658-crore Greater Bangalore Water Supply and Sewerage Project to provide Cauvery water and sewerage facilities to these seven cmcs and one tmc through a Rs 120-crore user-fee contribution and privatisation of operation and maintenance has received flak from local residents and various civil society groups (see 'Virtual realities' , Down To Earth, December 31, 2005).

The recent green light from the state government is bound to raise many more questions, but the most pressing is who will administer Bangalore while its councillors twiddle their thumbs post-November 2007?